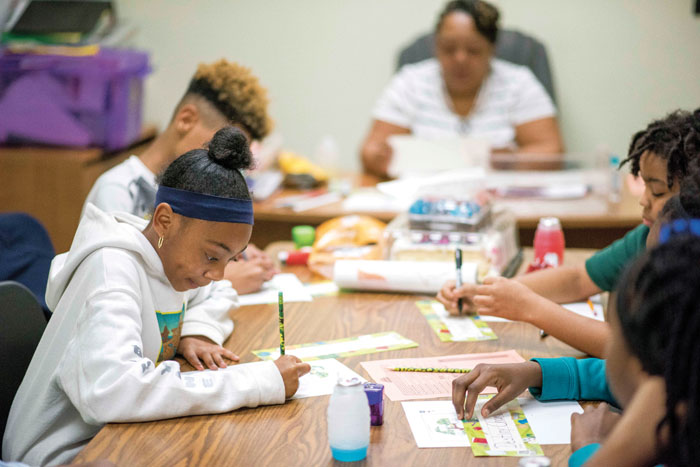 At left, Brooklynne Witherspoon, 10, started the program A Bridge 4 Kids, which is geared toward youth in kindergarten through 12th grade. The group meets at Hall’s Gym. — Photo by Jon C. Lakey

SALISBURY — This year, 10-year-old Brooklynne Witherspoon has made it her mission to find a summer job for her friend Princess Chambers. It’s just one of the many goals this Overton Elementary School student has set.

Nearly two years ago, Brooklynne created an after-school program called “A Bridge 4 Kids,” which initially began as a way to divert her sadness following the 2014 murder of her cousin, 7-year-old A’yanna Allen.

The program gives area youth something to do and, according to its founder, will also serve to help local children find jobs, stop violence and teach them how to interact with law enforcement.

“I want to keep people off the streets,” Brooklynne quickly said about her mission.

The young girl comes up with ideas for her program, but does receive help with logistics from her mentors — grandmother Sharon Freeman-Johnson, dance instructor Gloria “GG” Gray and Beverly House-Kerr, creator of Kujamani Creative Arts.

A group of about half a dozen or more children meet each Wednesday at Hall’s Gym, 1402 W. Bank St., to discuss what’s going on in their lives and hear from a community speaker. Most recently, the children heard from House-Kerr about what place, if any, religion holds in their lives.

Brooklynne and grandmother Sharon Freeman-Johnson collaborated on the name of the program. The two were texting, discussing the main mission of the program — to bridge the gap. Gradually, it became “A Bridge 4 Kids.”

Brooklynne said she’s inspired by the people in her life, including her parents Cedric and Erika Witherspoon, her program mentors as well as Salisbury Police Officer Scotty Robinson, who has spoken to her group. She hopes to inspire younger children by leading by example.

“I want to inspire them by doing good in the community,” she said.

Brooklynne said she would encourage any area youth with ideas to “go for it,” “believe in yourself” and “be determined.

Tayloria Kesler’s 5-year-old daughter, Zamaria Ellis, joined the program in August 2018. The great attributes she said in Brooklynne, Kesler said, was one of the main reasons she allowed her daughter to join the program.

“I thought she had great character,” Kesler said.

Kesler said she hopes her daughter will be able to build confidence and meet different people.

Although the program is still in its infancy, Brooklynne has already seen some detractors, who said she couldn’t possibly have come up with a structured program. This pre-teen, however, is unbothered, saying she doesn’t listen to the naysayers. Instead, she spends late nights delving deeper into creating ideas for her program.

“You just can’t think about other people. I don’t worry about negativity,” Brooklynne said.

Brooklynne said in five years she hopes the program will have grown to include more youth and incorporate a dance/step team. For now, “I really want to see Princess get a job,” she said.

As to the future of her program, Brooklynne said growth “would be amazing.”

Since the start of “A Bridge for Kids” in 2017, its members have participated in the Martin Luther King Jr. parade, made connections with local law enforcement, firefighters and local community and elected leaders.

When she’s not commanding an after-school program, the Salisbury resident is involved in dance, likes to draw, aspires to participate in gymnastics and enjoys reading books from one of her favorite authors, Raina Telgemeier and the Baby-Sitter’s Club books. She’s a school representative/leader and is a member of the Overton Elementary School Jump Rope Club.