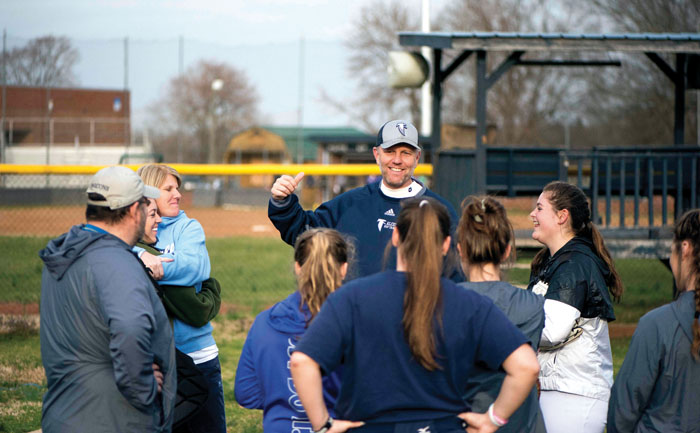 By day, 48-year-old Jimmy Greene is a partner at Fisher-Greene Insurance, helping clients and building relationships.

But in the late afternoon for much of the year, Greene heads out of the office to help girls learn how to get along with others, how to push themselves to excel and how to give back to their community.

He also coaches them in softball.

At the high school, Greene started this season with a 85-34 win-loss record.

Though daughters Peyton and Parker played on his teams and excelled at softball — they play club softball at N.C. State now — Greene says his motivation was broader.

That includes raising funds for supplies and making improvements to the softball field.

“I truly need someone to work out with me and by ‘work out with me’ I mean someone to scream at me to push harder like my softball coach used to (shout out to coach Greene, your voice is still in my head), Ali said.

Asked about the tweet, Ali said Greene always pushed her and her teammates to do their best.

“He helps me daily and doesn’t even know it,” she said.

God blessed him with a coach’s voice, Greene says. But it’s what he says that spurs players on.

“He’s an outgoing coach. He cares for all of us and loves the game,” senior Mary Sobataka says during practice one day.

“He’ll yell at you but pat you on the back at the same time,” Roberts says.

“He’s not going to put you down,” Sobataka adds.

Greene expects more than good play. When students express an interest in being on the team, he requires them to prove their commitment. First, they have to volunteer at least six hours at the concession stand, the ball field or elsewhere. They also get a handbook spelling out team rules and sign a contract.

He wants this kind of service to be ingrained in his players. “Keep them understanding that you have to always give back. You just can’t show up and have something handed to you.”

The opportunity to help kids build better lives is a blessing, Greene says — a multi-faceted blessing, in his case.

He serves on the board at Smart Start Rowan, an agency focused on helping children get a solid start before they enter kindergarten. His annual “Read to Me” visit to a childcare center is an activity he wishes everyone could experience. “The joy of reading to a child will enhance you,” he said in an opinion column in the Post.

As a board member at Partners in Learning, he serves on the committee looking for a new site for the five-star childcare center currently located on Catawba College’s campus.

He’s on the board of trustees at Christ United Methodist Church and serves as president of the West Rowan High School Boosters Club.

He and wife Donna, a social worker at Novant Health Rowan Medical Center, have four children. In addition to Peyton and Parker, ages 21 and 19, respectively, there’s West Rowan sophomore Pressley, 16 and the couple’s youngest daughter, and son Paxton, 14, an eighth-grader at West Rowan Middle.

Pressley, by the way, does not play softball, and that’s fine with Greene.

“You’ll hear me quote my dad a lot; my dad’s one of my heroes,” the younger Green said.

And he says his mom, Cynthia Dwiggins, is “still a rock for me.”

Greene went to school in Rowan until fifth grade, when his mother took a teaching job in Davie County. His parents had divorced, but Greene says he was blessed with full support from both.

He was “average” in football, basketball and baseball at Davie, he says. Coaching is more his forte, and he figured out fast that he couldn’t coach young women the way he was coached.

He has to make sure his players are on board, and then they’ll do well, he says.

“It’s amazing how much of a guidance counselor you are in high school sports now,” he said. “There are so many issues going on.”

Coaching girls is different in another way.

His players won’t take him seriously if does otherwise, he says. It distracts them.

And Green does his best to bring around players who, at first, balk at his rules and advice. Players don’t have to be friends, but they should be friendly, he said.

He tells players they don’t always have to like him — or all their teammates — but they have to find common ground to get along and strive for a goal.

The word “fight” comes up often in an interview with Greene — even when talking about Rowan County.

“I think the spirit of Rowan, honestly, is we are a lot of fighters here,” he says. “I think we’ve seen a lot of growth all around us, yet we’re still here. We’re still trying to make ourselves better.”

It’s easy to get discouraged when you hear that 67 percent of Rowan-Salisbury students qualify for free and reduced lunch, and there’s so much poverty, he says.

“But yet there are so many good things happening around us that you just can’t … get buried in the negative,” he said. “We continue to fight to make ourselves better.”

Greene said he has been inspired by people who are passionate on the issue.

“You kind of have to draw on that. It’s contagious,” he said. “I fight for my girls all the time. I fight for my team and I love to fight for my county. What can we do to better it?”