Spirit: Working together: NAACP President Gemale Black proves that ‘young people do have a voice’ 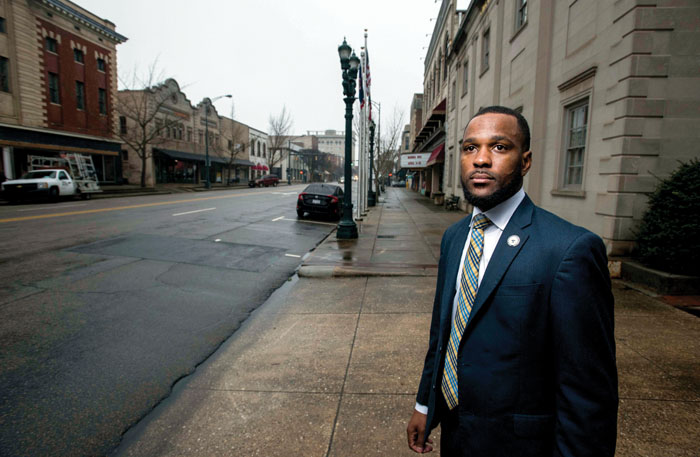 “I like to say, ‘How can we help?’ instead of ‘Why are you … ?’ We always need to bring something to the table. Some people ask why I don’t do a lot of whooping and hollering out there. I say I don’t need to. We can resolve our differences by sitting down and having a discussion.”

Gemale Black, the youngest local NAACP president in the state ever, is entering his second term.

He’s passionate about a few things: justice, schools, young people, and his family.

“I like to ask, ‘How can we work together?’ because we can ally our forces together. If we work together, this will be a better world. That’s what it takes, working together. That’s how we’re going to get it done.”

Black grew up in Salisbury and has a twin sister and two brothers. He has two daughters, ages 7 and 2.

His parents, George and Linda Black, have been married for 30 years. His mom works at Rowan Salisbury Community Action Agency. His dad recently retired from Innospec to help with the family catering business.

“Everywhere I go, they go. We went to Montgomery and San Antonio. I wanted to fly, but they said, ‘No, we’re going to drive.’ It doesn’t matter where I go, they go with me. I’m blessed to have them both. They roll with me.”

Black works for S.L. Nussbaum as a recertification specialist. He’s currently working to recertify Brenner Crossing. His flexible work schedule enables him to serve as NAACP president, a job he laughingly refers to as a 24-7 job.

“If it ain’t complaints, it’s policies you’ve got to watch.”

He serves as the young adult chairman on the state level. He travels to the state office in Raleigh at least once a week. Soon that office will move to Greensboro, and he’s thankful his commute will be cut in half.

The national NAACP has a new program called Next-Gen, which accepted competitive applications. The top 15 applicants attend a yearlong leadership program, once a month in various cities with all expenses paid. The second tier chosen attend with tuition waived, but they must pay their own travel expenses.

“They received 300 applications. I applied last year, and I learned in January that I made it to the top tier. I’ll be training in Detroit, Chicago, Minneapolis. In addition, we’ll have webinars and conference calls. I’ll be traveling monthly for a year. After the year is done, if you’ve completed everything, you graduate. They can open special jobs on the national level for the graduates.”

Black is quick to praise his board. “Yolanda Woods is my vice president. She’s been there, done that. She was president before, so she surely knows what she’s doing.”

“The committees in our chapter do the research and recommend a path of action.”

He says today’s biggest issues are voting, education, economic development and housing. The NAACP has is working now to address the federal government’s latest document on impediments to fair housing in the community.

Having been elected as president at age 28, he’s acutely aware of his youth.

“Some folk say, ‘Look at that young guy,’ but I promise you I’ve studied that policy and I can go toe-to-toe with you on it.

“Sometimes my youth helps, sometimes it hurts. Sometimes older people give me — well, older people get more respect. When I first came in, maybe two years after, it was hard to get respect, hard to get people behind me. It got to the point, ‘Should I give up? I’m working my tail off to support this community, and where are they?’

“But the positive side is qualifying for Next-Gen and the possibility of national opportunities. Another good side is I have plenty of energy. A downfall is at my age, I still have to work. It’s good I have a strong VP.”

Black’s energy has led to changes in the approach of the local NAACP chapter.

“My leadership style is very different. If we always keep things the same, where would we be? I’m not sure the national level would’ve lasted 110 years if it hadn’t changed with the times — or our local chapter 40 years.”

“One thing I want to accomplish, when I’m done, I hope they can say, ‘Gemale impacted the change needed in Rowan.’ I hope by being level-headed, having a seat at the table, they can say, ‘Young people do have a voice. Young people can do the work.”