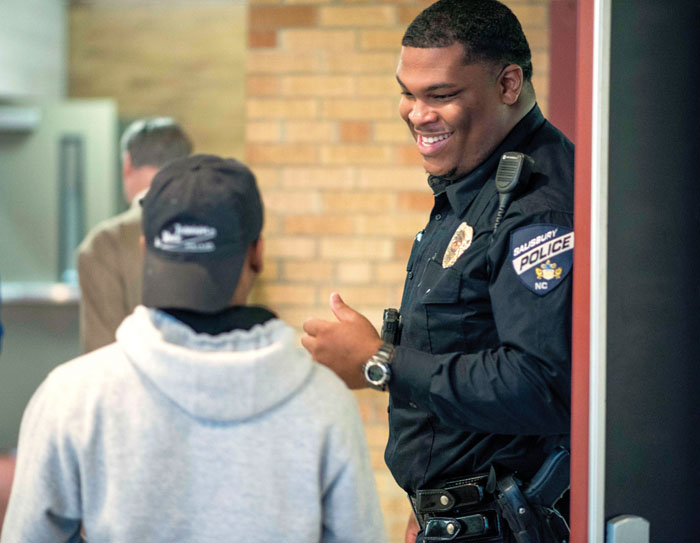 SALISBURY — Scotty Robinson has tried to not be defined solely by his position as a school resource officer with the Salisbury Police Department. He wants to see better for the children in the community and the school that he patrols.

Not long after becoming an officer with the Salisbury Police Department, Robinson was sidelined when he broke his ankle. After returning to duty, he was encouraged to become an SRO, a position he’s held for seven months.

“I try my best not to use a title. I’m just a person who wants to see better for our kids,” he said.

In the beginning, some students had such a bad perception of law enforcement that they would see Robinson and turn the other way. Now, he can’t get rid of them, Robinson teased.

He graduated from East Carolina University and worked for the Rowan-Salisbury School System as a district recruiter, a football coach for Livingstone College and a recruiting coordinator for the school. He then worked as an admissions coordinator at Catawba College and, most recently, as a human resources analyst and a public safety recruiter with the City of Salisbury.

“I recruited myself,” he joked.

Robinson, who grew up in Salisbury, never envisioned his career path leading to one in law enforcement. He said there were a number of police officers who poured into him when he was younger, including the late Mark Hunter and retired officer Lynn Foster.

Foster was a school resource officer at Salisbury High when Robinson attended.

As a child, Robinson said, Boylan saw potential in him even when he was a “jerk” in class.

“All of the teachers saw things way beyond what I was,” Robinson said of Salisbury High.

“I had a village at this school,” he said.

He was scared to let the people in his circle down.

“Growing up in Salisbury, it could’ve went the other way for me,” Robinson said.

Robinson said the students he encounters each day are dealing with way more issues that he or his friends dealt with growing up.

“Kids will tell you what they are going through. These kids taught me that I have no idea what they face. We have to listen to them; that’s the only way to affect change,” he said.

Robinson said there needs to be a better job among community members of giving kids a chance and letting them understand they have worth.

One phrase that he’s tried to live by came from the youth of the “A Bridge 4 Kids” after-school program, which created a thank you sign for him that had part of an anonymous quote — “work for a cause, not for applause. Live life to express, not to impress.”

“Where we go wrong is when we do things and look for what we want to get out of it, and we fool ourselves into thinking kids don’t see that,” he said.

Not only does he get motivation from his own children to get up and go to work every day, but often he comes into contact with a student who reminds him not to judge them based on what they’ve done.

“I’ve come to realize you can’t save everybody, but everybody deserves a chance,” he said.

When he’s at the school, Robinson says he makes it a priority to interact with as many people as possible.

“Every missed opportunity is that one that I could’ve made a difference,” he said.

His mission is to pay forward opportunities he received to students he encounters.

Robinson also has two nonprofits — HUB City Sports Group and Beyond the Lights Foundation — both created to reach at-risk youth.