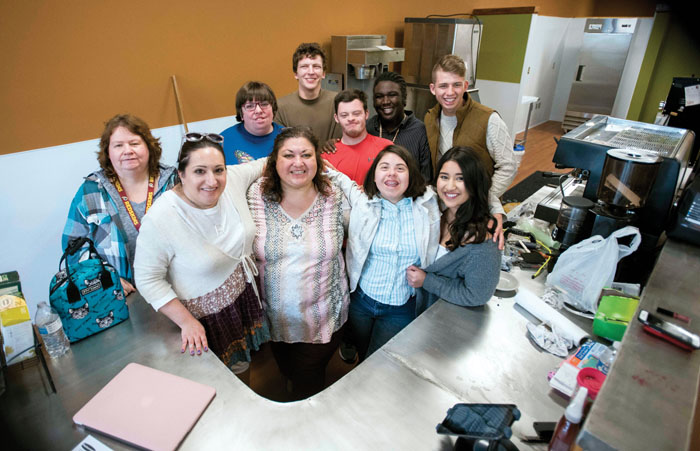 Evelyn Medina (center) is surrounded by members of her serving staff that will work at her Mean Mug Coffee Company. Mean Mug has opened a new location on North Main Street in downtown Salisbury. At the new location, Medina plans on employing graduates from the Rowan-Cabarrus Community College’s S.O.A.R. program. Skills, Opportunity, Awareness, Readiness (S.O.A.R.) is a community college program designed specifically for adults with intellectual disabilities. — Photo by Jon C. Lakey

Evelyn Medina got an email one day that brought tears to her eyes.

It was from architect Pete Bogle asking if she would be interested in opening a Mean Mug coffeeshop in downtown Salisbury and employing students with intellectual disabilities from Rowan-Cabarrus Community College’s Skills, Opportunity, Awareness, Readiness program.

What Bogle didn’t know at the time is that her brother, Harold Mollinedo, has cognitive disabilities and was a student in the S.O.A.R. program. Medina said she knew the struggles people with intellectual disabilities face in getting a job.

“It was a God-given that Pete and I found ourselves at the right intersection — at the right time in his life and my life and in our business ventures,” Medina said.

Medina moved to Salisbury in 2001 for an unsuccessful business venture and stuck around. In 2006, Mollinedo joined his sister in Salisbury and she began searching for a job for him. In Los Angeles, Mollinedo had worked for various companies from Walmart to a lawn care service. After more than a year of looking with Rowan Vocational Opportunities, they could not find a job for Mollinedo.

“The thought hit me, ‘Well maybe I should start a business where Harold could work,’” Medina said. “At the time, my kids were 4 and 5 years old, and there was no way I could. I was still very new in this community trying to find my own voice and my own way. That thought sat in the back of my head.”

Medina opened Mean Mug on South Fulton Street in 2015, concentrating on building a place where community residents could come to have a cup of coffee and feel welcome. She added a piece of her roots: coffee, a staple in Guatemala, where she was born.

“I was more focused in community,” Medina said. “I wasn’t thinking much of Harold in that sense. I was thinking about how cool it would be to have a place in Salisbury where people can just hang out as a community.”

Medina is now established as a small business owner of Mean Mug and Medina Construction, which she started in 2008 with her husband, Rigo. She can make decisions that positively impact the Salisbury community, so at the coffeeshop she started a pay-it-forward model — a give-give-give.

Medina said it allowed customers to feel a sense of pride buying a drink to pay it forward. It gave the baristas an opportunity to help a customer who was short of money, and importantly, it helped people in need in a way that made them feel comfortable.

With her new location at 110 N. Main St., Medina knows it will be a challenge employing people with special needs. Her teenage daughter, who has watched and helped her run Mean Mug, warned her that it was not going to be easy.

“If she learns nothing else, she needs to learn that the most rewarding things in life take hard work,” Medina said. “It’s just the way it is.”

The glow in the eyes of Bridget Henderson, the lead instructor of S.O.A.R., or Nicholas Black, a S.O.A.R. student who will work at Mean Mug, makes potential hardships worth it.

“You don’t have to change the world. You just have to touch one life. And if I can accomplish touching their lives in my lifetime, that’s all I need,” Medina said. “I can die happy.”