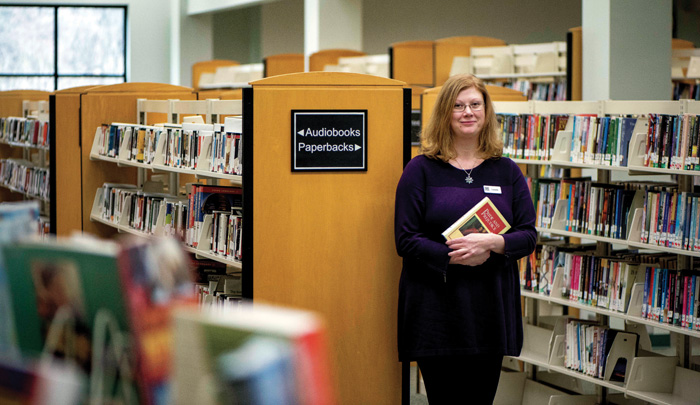 SALISBURY — Call her Dr. Lyda if you like. Rowan Public Library’s Laurie Lyda has a doctorate degree.

She once read every astronomy book in her elementary school library.

She’s now the supervisor of the South Rowan Regional Branch of the library, but she does so much, it’s hard to keep up. Everything about her background makes library work seem natural — her education and experience have been a good fit for her job.

“My parents are readers, so I grew up in a household where reading was encouraged and the value of books was recognized,” Lyda said.

Lyda moved to Salisbury in 2015 as a visiting assistant professor of English and started working at the library in June 2016. She started as the East Branch supervisor in Rockwell and went to South in 2017.

“I like to be engaged in my work, and I am happiest in an environment where I can be creative and use a variety of skills,” she said. “So, working for Rowan Public Library has been wonderful.”

But she doesn’t just supervise the South branch in China Grove. She is the public relations coordinator for the system.

“I get to work with wonderful staff, plan programming — like our upcoming Star Party on April 12 — and compose, create, and/or edit promotional materials,” Lyda said.

She got her bachelor’s and master’s degrees at Appalachian State University, and her doctorate at the University of North Carolina at Greensboro — all in English. Her doctorate’s concentration was in 19th and 20th century British literature and literary theory.

Lyda admits to being a library nerd, having spent so much time in libraries during her education.

“Even when my primary employer was a college or university, I always had side projects or jobs, and many of them involved organizing events, coordinating advertising, writing and editing,” she said. “I love creative things — whether it’s a play or an art show or a great film. I’ve always been a fan of movies, from classics — think Bette Davis or Cary Grant — to the current Marvel movies.”

Lyda also loves to travel, even if it’s just to walk along a quiet beach. One of her favorite places is Lake Louise in Banff, Alberta, Canada. Lyda says she still remembers the scene of the frozen lake surrounded by snow-covered mountains.

One of her favorite things to do when traveling, she says, has always been to visit libraries because of what she’s able to learn about the community.

“For me, libraries have always provided opportunity and knowledge — and as someone who grew up without the Internet or ready access to bookstores, that access was a gift. It still is. “

Lyda spent after-school hours in her local library because it wasn’t far from her mother’s office. She knew the staff and they knew her. It was one of those staff members who encouraged her to read Jane Austen and sparked her interest in British literature.

But Lyda initially didn’t think she’d be a librarian. However, she spent many hours at her local library when she was a kid, “and my two semesters as a student worker in UNCG’s interlibrary loan department were a highlight of my Ph.D. program.”

As a branch supervisor and public relations person, Lyda’s days are full.

“I always tell people that what I love about my job is that I learn new things every day. That’s important to me, and the variety involved in my particular position ensures that I am always learning,” Lyda said. “I like working with special programs — like helping to plan and coordinate West Fest, which was held last October in Cleveland — and working with promotional materials. I also enjoy connecting with people in the community, whether that’s providing a resource they need or facilitating a program platform opportunity. “

How does she keep up?

“I live by to-do lists, and I even have a wall chart in my office that keeps track of big events and due dates,” she said. “I like to figure out ways to work smarter, not harder, so I’m always looking for ways to improve organizational skills.”

She believes libraries are the center of their communities and say’s that’s true of the Rowan Public Library, too.

“By providing free access to wifi and information services and resources, plus the physical and digital circulating collections, RPL plays an integral role in the lives of Rowan County residents,” she said. “The library seeks ways to serve its communities, and I appreciate being a part of that and ensuring that everyone has access to knowledge and opportunity.”

Lyda says she’s motivated by doing her job and inspired by creativity, positive energy and people who make an effort to make the world a better place.

Now, Lyda said, she excited about seeing the West Branch in Cleveland become a reality and about Rowan Public Library having four branches.

“There are so many great opportunities coming, and it will be wonderful to see the community take advantage of them,” she said.