Zion Williamson: Born in Salisbury, but it’s not his hometown 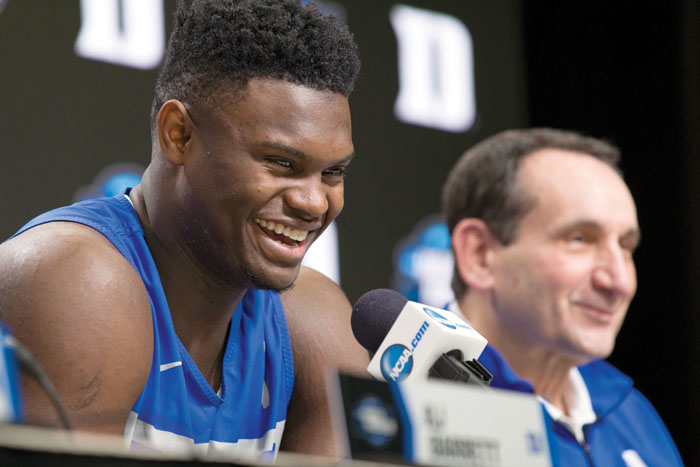 Can Salisbury claim Duke’s Zion Williamson as its own?

Zion, just 18 years old but already known by just his first name, is the current face of college basketball and a lock for the No. 1 pick in this June’s NBA Draft. What’s more, he was born in Salisbury at Rowan Regional Medical Center on July 6, 2000.

Zion’s birth certificate states that he was born at 1:07 a.m.

That’s about Zion’s only association with Salisbury, but it’s not his family’s only tie to the area.

Lateef Williamson, Zion’s father, was a high school football standout at Mayo High School in Darlington, S.C. He first went to play at N.C. State, but later transferred to Livingstone, where he was a defensive lineman on the CIAA championship teams of 1997 and 1998. The Blue Bears were a combined 15-5 during those two seasons.

After college, Williamson and Sampson returned to South Carolina, and that’s where the future Duke basketball star was raised.

According to Chris Wright of the SEC publication, Saturday Down South, Sampson coached Zion until he got to high school. That included youth leagues in Florence and Sumter, S.C. Then, middle school in Marion, S.C. At some point in Zion’s young life, Sampson married former Clemson basketball player Lee Anderson and his stepfather also provided some coaching along the way.

The family eventually moved to Spartanburg, where Zion went to high school at Spartanburg Day.

So, in a way, maybe it’s similar to the early years of another basketball icon — Michael Jordan.

Most people know that Jordan grew up in Wilmington and played at Laney High School before heading to UNC-Chapel Hill. But Jordan was born in Brooklyn, N.Y., and moved south with his family as a toddler.

And just as Jordan thinks of Wilmington as his hometown, Zion claims South Carolina. According to a recent column by the Charlotte Observer’s Scott Fowler, Zion hung out some in Wofford College’s gym, while in high school in Spartanburg. In 2017, Zion told Fowler that “going to Wofford was a real possibility (Zion also weighed 235 pounds then, instead of his current 285).”

Of course, soon after that, every major college basketball program wanted Zion.

When Zion choose Duke over Clemson, South Carolina and many other schools on Jan. 20, 2018, (his mom’s birthday), he told Greg Hadley of The State newspaper in Columbia, “I’d like to thank South Carolina and Clemson for even taking the time to recruit me. … I still have a lot of love for my state. I don’t want to let my state down. I love my state to death. I’m always going to represent.”

Hadley also spoke with Zion’s mother at his signing party. He reported that Sharonda was planning to live in Durham while Zion was at Duke, but she had a message for her home state.

So, for the record, Zion Williamson was born in Salisbury. But, obviously, the Palmetto State is where his heart is.

The Post’s efforts to contact Zion (through Duke) and his parents for this article were unsuccessful.