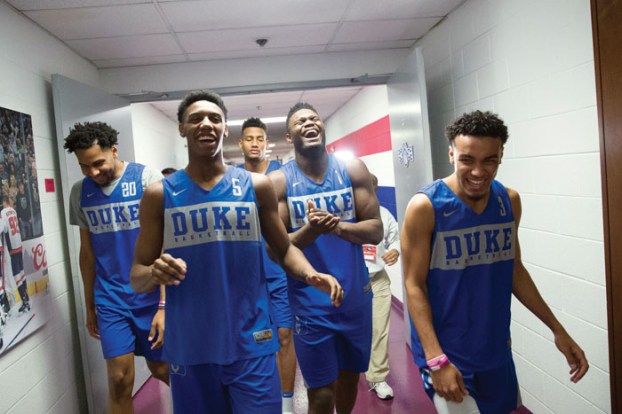 Final Four spot on the line ... 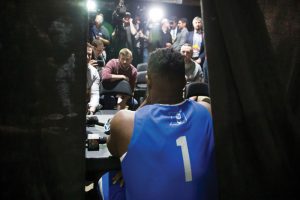 WASHINGTON (AP) — Zion Williamson watched in awe in 2015 when Duke and Michigan State met in the Final Four.

When he steps on to the court for another Duke-Michigan State NCAA Tournament showdown on Sunday with a Final Four spot at stake, the fabulous freshman will feel grateful to be a part of it.

“I’m excited to play against Michigan State,” Williamson said. “That’s why you come to college: to be a part of games like this.”

Williamson will be playing, and the college basketball world will be watching the titanic Elite Eight matchup between the top two seeds in the East Region. The latest meeting between the storied programs is Zion and RJ Barrett against Cassius Winston and Mike Krzyzewski against Tom Izzo.

It should be everything that’s great about heavyweights going at it in March.

The mutual admiration between Krzyzewski and Izzo is almost over the top at times, though they’ve had plenty of chances to heap praise on one another. Their teams have met 12 times — and Duke is 11-1 in those matchups, including 4-1 in the NCAA Tournament.

While Krzyzewski brushed off the value of that lopsided record, Izzo brought it up unprompted and said one of his goals is to win this game to cut into that deficit. Spartans players know this game has special meaning to him.

“We want to help him out,” Winston said. “He’s up there with the greatest coaches of all-time, so is Coach K. It’s a chance to go to a Final Four, a chance to beat Duke — all type of things just make it exciting to be out there.”

The star power adds to the excitement. Winston is one of the top point guards in the country, and Duke could legitimately have the two top picks in the NBA Draft in Williamson and Barrett.

Overall No. 1 seed Duke doesn’t know yet if it’ll have Cam Reddish after the freshman forward missed the Sweet 16 victory against Virginia Tech with a left knee injury. Krzyzewski called Reddish a game-time decision but said there was no structural damage.

“If he can’t go, we’ve been here before and we’ve got guys ready to step up,” Duke forward Javin DeLaurier said. “Even if a guy goes down, the world doesn’t stop moving. The game moves on.”

Michigan State big man Nick Ward said a deep bone bruise in his left hand from the game against LSU won’t keep him out, even though it’s the same hand he broke in February.

Tillman said facing Duke is as important to Michigan State as going up against rival Michigan. The history between the schools has built it up as something of a nonconference rivalry.

“This is our chance to make it to a Final Four and it happens to be against another powerhouse in college basketball,” Michigan State redshirt senior Kenny Goins said. “Just the excitement level there is taken up tenfold really. All of us our excited for it, ready for the challenge because (it’s) Duke. Just, it’s Duke. Just to be able to go up against what everyone is calling the best.”

Goins is the only player left on either team from the 2015 game, but he didn’t play in it. Duke freshman guard Tre Jones was 15 at the time and relishes the opportunity to be part of the next chapter, which could be an instant classic.