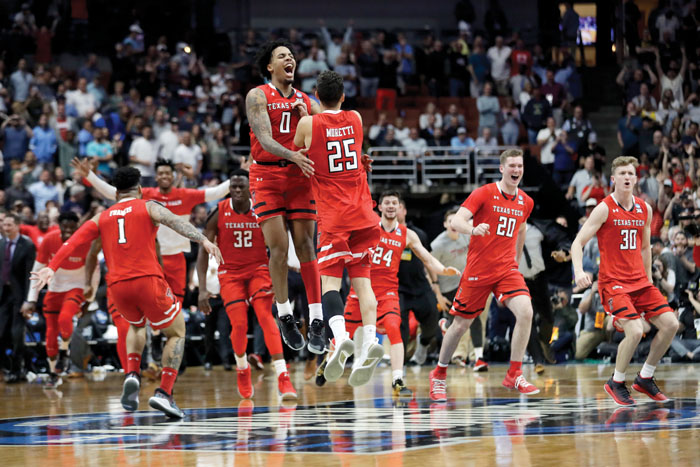 ANAHEIM, Calif. (AP) — Texas Tech is heading to its first Final Four thanks to a kid from Italy who made the big shots and a defense that refuses to rest.

Davide Moretti opened up a late lead with the two most important 3-pointers of his life, Tariq Owens came up with a big rejection and the Red Raiders caught a ride straight to Minneapolis with a 75-69 victory over top-seeded Gonzaga on Saturday.

Moretti also made all four of his free throws down the stretch to wind up with 10 of his 12 points over the final 4 minutes.

The first of his 3s — a spot-up from the side of the arc — gave third-seeded Texas Tech (30-6) a five-point lead, its largest to that point, with 3:49 remaining. The second came with 1:50 left and pushed the advantage to six.

Six might not seem like much. But then again, not every defense is like the one coach Beard draws up, and demands, out of the transfers and second-choice players he started bringing to Lubbock when he arrived three seasons ago.

“It’s real. That defense is real,” Gonzaga coach Mark Few said. “It impacted us tonight. They took a lot of balls tonight.”

Texas Tech had nine steals that were among 16 turnovers by Gonzaga. The Bulldogs averaged a little more than 10 per game this season.

With Texas Tech leading 68-62 and less than a minute remaining, Owens swooped over to the sideline to reject Gonzaga’s NBA-bound star, Rui Hachimura, then saved the ball to give the Red Raiders possession and start placing an exclamation point of sorts on a celebration that was just getting warmed up.

“I knew he was their best player, and that was my assignment on the court,” Owens said. “I knew they’d be looking for him. Once it went out to him, I knew I had to get out there.”

Gonzaga (33-4), which spent a good chunk of the season atop the AP Top 25, chipped away and pulled within 71-69 on Zach Norvell Jr.’s putback with 11 seconds left. But Josh Perkins reached over the end line and tipped the ball out of Matt Mooney’s hand as he was inbounding for a technical.

Moretti did the honors — sinking the technical free throws — and then made two more after Gonzaga fouled in desperation.

Jarrett Culver, an NBA prospect who chose his hometown college over several other suitors, led the Red Raiders with 19 points. Mooney, a transfer from South Dakota, had 17.

But, as usual, the biggest stats came on defense. Texas Tech held the Bulldogs’ nation-leading offense to 42 percent shooting. This was only the fourth time Gonzaga was held under 70 this season.

“I think I turned the ball over five times in the first half,” Gonzaga forward Brandon Clarke said. “It’s something I’ve never done.”

And though Gonzaga was the only team to beat Duke and Zion Williamson at full strength this season, there will be no rematch in the Final Four.

This was a tight, back-and-forth game. Neither team led by more than five for the first 38:10, until Moretti spotted up for one of the most open looks of the game for either team.

He was the player brought to tears earlier this month, when his family visited from Italy and Beard brought them into the meeting room to surprise him.

If he thought that was fun, just wait.

“I can’t believe we’re here after all the work we did this season,” Moretti said.

Texas Tech wasn’t picked to do much after losing most of the top contributors from the team that stalled out at the Elite Eight last year. But as the regular season wore on, Beard said opposing coaches kept telling him they might be something special.

He relished putting a large chip on his players’ shoulders, telling them they had to work harder because they weren’t the All-Americans and NBA prospects that dot the rosters of some of those bigger, more-famous teams.

Gonzaga was one of those teams, but the Bulldogs are going home.

And Beard, who was coaching in Division III just six years ago, might be changing his tune ever so slightly.

“I don’t mind the underdog, chip-on-the-shoulder story, but it disrespects these players a little bit when people don’t understand, we have really good college players,” he said. “We have one of the best teams in the country this year.”

One of the four best, at least.