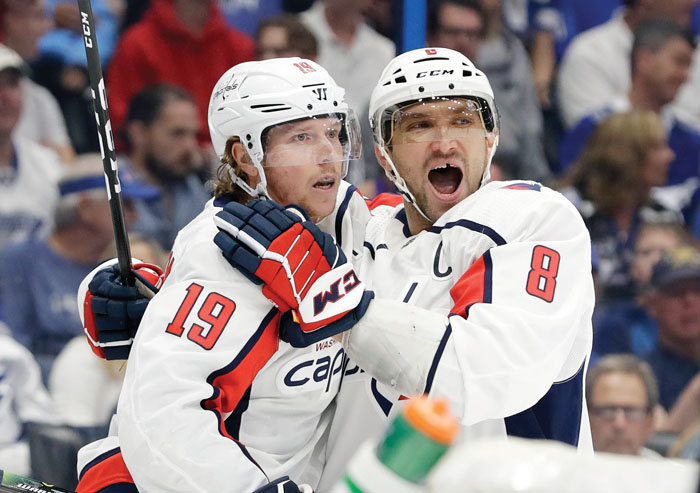 TAMPA, Fla. (AP) — Alex Ovechkin scored his 50th and 51st goals of the season, leading the Washington Capitals to a 6-3 victory over the Tampa Bay Lightning on Saturday night.

Ovechkin reached the 50-goal mark for the eighth time in his career. Only Mike Bossy and Wayne Gretzky, who each did it nine times, have scored 50 goals in more seasons in NHL history. Ovechkin has 657 goals to move past Brenden Shanahan for 13th in the NHL history.

The first goal for Ovechkin came in the third period as Oshie fed a cross-ice pass from the left boards to the bottom of the right circle for a one-timer. Ovechkin added a power-play goal at 16:15, his 247th power-play goal to tie Luc Robitaille for fourth on the NHL list.

UNIONDALE, N.Y. (AP) — Jordan Eberle continued his scoring surge with another goal, Anthony Beauvillier added two of his own and New York beat Buffalo to clinch a playoff berth for the first time since 2016.

Michael Dal Colle and Ryan Pulock also scored for the Islanders. They have 99 points in their first season under coach Barry Trotz and secured a postseason spot in March for the first time since 1990.

The Islanders have won four of their last five games.

Noel Acciari scored and Tuukka Rask made 19 saves for Boston. The Bruins have already clinched a playoff berth and will most likely open the postseason at home against Toronto.

RALEIGH (AP) — Teuvo Teravainen and Dougie Hamilton scored 21 seconds apart in the first period, and Carolina beat Philadelphia to boost its playoff hopes and eliminate the Flyers from contention.

Justin Faulk, Jaccob Slavin and Brock McGinn and Petr Mrazek made 30 saves for Carolina. The Hurricanes are in position for the first Eastern Conference wild card.

Robert Thomas and Tyler Bozak also scored for the Blues, and Jake Allen made 25 saves. St Louis is 27-10-4 since the turn of the year. Drew Stafford and Joey Anderson scored for the Devils.

David Savard, Oliver Bjorkstrand and Boone Jenner also had goals, and Sergei Bobrovsky made 23 saves for Columbus. The Blue Jackets maintained their hold on the final wild-card spot in the Eastern Conference playoff race.

Carey Price made 23 saves for the Canadiens. They are fighting Carolina and Columbus in the race for the final two playoff spots in the Eastern Conference. Mathieu Perreault scored for Winnipeg, and Connor Hellebuyck made 40 saves.

Toronto missed a chance to clinch a playoff berth, falling to 3-5-2 in its last 10 games.

Woods meets his match in Lucas Bjerregaard at Match…