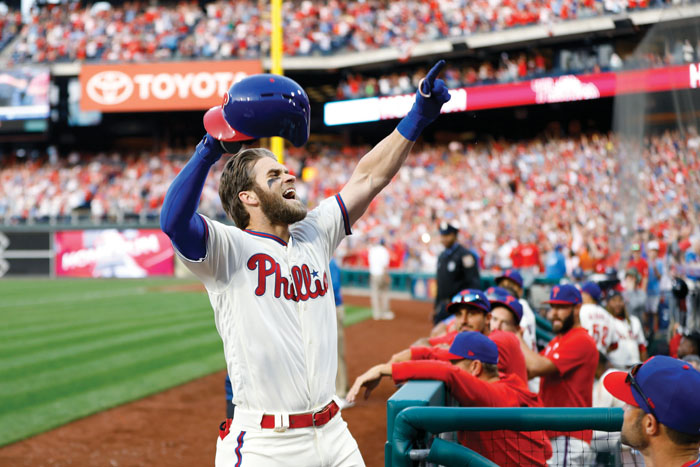 PHILADELPHIA (AP) — Bryce Harper homered deep into the second deck in right-center field for his first hit with Philadelphia and celebrated with an emphatic curtain call, highlighting the Phillies’ 8-6 win over the Atlanta Braves on Saturday.

After getting high fives in the dugout, Harper climbed out for a curtain call, throwing both fists in the air and shouting “Let’s go!”

Maikel Franco and J.T. Realmuto also went deep for Philadelphia. The game was tied at 4 in the fifth when Realmuto lined a two-run drive off Wes Parsons (0-1).

Adam Morgan (1-0) faced one batter in the fifth inning.

Dansby Swanson and Charlie Culberson homered, and Freddie Freeman had four hits and drove in two for the Braves.

Jimmy Yacabonis (1-0) allowed one run over three innings for his first win since September 2017. Mike Wright struck out Miguel Andujar with two on for his first pro save in nine seasons.

James Paxton (0-1) gave up one earned run and four hits in 5 2/3 innings of his Yankees debut.

MINNEAPOLIS (AP) — Greg Allen hit a go-ahead sacrifice fly in the top of the ninth inning, then Cleveland reliever Brad Hand escaped a bases-loaded jam. It was 34 degrees for the start at Target Field.

Hand retired C.J. Cron on a flyball to end it for a save, completing a combined two-hitter.

The Blue Jays threw just three shutouts all of last season, the second fewest in the majors. Detroit was last with two.

The Tigers were blanked an MLB-leading 18 times in 2018. They’ve scored in only one of 28 innings so far this season.

Tigers slugger Miguel Cabrera left after being hit on the right hand by a pitch from Sanchez to begin the sixth. X-rays were negative.

Sanchez (1-0) allowed three singles, struck out six and walked three. Ken Giles got his first save.

Jeff McNeil had four hits for the visitors. Alonso doubled twice and also had a couple of nice stretch plays at first base in the second game of his major league career. He is one of the young components of a reconstructed roster under agent-turned-GM Brodie Van Wagenen.

Another offseason acquisition, former Nationals catcher Wilson Ramos, added two hits and two RBIs and scored three runs. And to top it off, new closer Edwin Diaz picked up his second save with one pitch.

Justin Wilson (1-0) threw a perfect seventh for the win. Washington reliever Trevor Rosenthal (0-1) was booed off the mound after entering a 4-all game in the eighth and allowing all four batters he faced to reach base in his return from Tommy John surgery.

KANSAS CITY, Mo. (AP) — Jorge Soler had three hits and three RBIs, Alex Gordon scored three runs despite not getting a hit and Kansas City used its speed to win.

Billy Hamilton got three hits and scored twice for the speedy Royals, off to a 2-0 start for the first time since their World Series-winning season in 2015.

The first pitch was delayed 30 minutes because of rain. When the game began, it was 38 degrees and felt like 28, whipped by 18 mph winds.

Jakob Junis (1-0) gave up Jose Abreu’s three-run homer. Ian Kennedy pitched the ninth for the first save of his career.

MILWAUKEE (AP) — Christian Yelich became the first MVP to homer in the first three games of the following season, Josh Hader closed things out with an immaculate inning and the Milwaukee Brewers beat the St. Louis Cardinals 4-2 on Saturday night.

Yelich made a sliding catch in right field in the top of the first inning, then took Hudson deep for a solo shot in his first at-bat.

Brewers right-hander Alex Wilson struck out Paul Goldschmidt to end the seventh and followed with a scoreless eighth in his Brewers debut.

A day after hitting three home runs, Goldschmidt had an RBI single but struck out twice. Kolten Wong drove in the Cardinals’ other run with a double in the fourth, part of a three-hit day.

MIAMI (AP) — Miguel Rojas and Martin Prado each had three hits and the Miami Marlins won for the first time this season, beating the Colorado Rockies 7-3 Saturday night.

Limited to a total of six hits in a pair of losses to Colorado earlier this week, the Marlins broke loose for 16 hits against starter Tyler Anderson and four relievers.

Lewis Brinson, who scored twice, and Rossell Herrera and Chad Wallach each had two hits. Rojas doubled twice and drove in three runs.

Pablo Lopez (1-0) allowed five hits and three runs and struck out a career-high seven in 5 1/3 innings. He was lifted after retiring Trevor Story on a flyball that ended an 11-pitch at-bat.

Rojas and Herrera capitalized on Anderson’s first pitches with hits that keyed a three-run fourth for a 5-2 lead. Rojas’ double to left center scored two and Herrera followed with an RBI single.

The Marlins scored their first runs of the season in the second not produced by a solo homer. Granderson’s sacrifice fly and Rojas’ RBI double gave Miami a 2-0 lead.

After sporadic rain during the first two games of the series, the roof at Marlins Park was opened Saturday.

Rockies: 1B Daniel Murphy missed the game and will have X-rays on his left index finger, according to manager Bud Black. Murphy jammed the finger while diving to stop a sharp grounder in the fourth inning of Friday’s game. Although Murphy remained in the game and had his first hit as a Rockie in the ninth, Black said the swelling on his finger worsened overnight.

Marlins: P Jose Urena expects to make his second start against the New York Mets on Tuesday as he recovers from the line drive he took behind his left leg off a hit ball by Dahl in the second inning of the season opener Thursday. Manager Don Mattingly said Urena will have his bullpen session on Sunday.

RHP Jon Gray will start the series finale for the Rockies on Sunday while the Marlins will go with RHP Sandy Alcantara.

Cardinals: OF Harrison Bader got a day off after going 2 for 8 with a home run through the first two games of the season. With Bader out, Tyler O’Neill made his first start of the season.

Brewers: OF Ryan Braun was left out of the starting lineup but appeared as a pinch-hitter, flying out to left in the sixth.