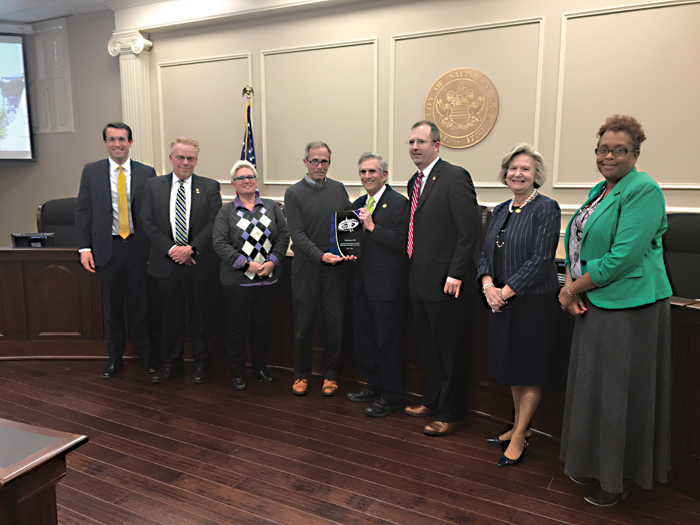 Early in January, the Road Runners Club of America announced that Salisbury had been designated as a “Runner Friendly Community.” One of 50 cities nationwide and the only one in North Carolina, Salisbury received the award based on extensive criteria. Community and government support, plus community infrastructure were considered to ensure that running is safe, affordable, accessible and enjoyable in those cities who met the high bar.

Road Runners Club of America is the parent organization of more than 2,500 running clubs and five million runners. Founded in 1956, RRCA serves as the governing body for the Salisbury Rowan Runners and features enhancements and programs for the running community. RRCA also manages SRR’s non-profit status.

While running is certainly popular in our area and one of the best ways to keep fit and healthy, the sport can have a significant economic impact on the community as well. Some things that mattered for Salisbury were safe off road running areas like Salisbury Community Park and the greenways, along with good sidewalks and well-lit streets. A long list of runner friendly businesses and sponsorship support for the local races and other running events mattered too.

Long ago, little things like making sure that race routes had brush from yards picked up, streetsweepers used ahead of time or streetlights repaired helped to make the race experience better. All this work, including cones and barricades plus the efforts by police and fire departments make Salisbury one of the best race destinations around. I remember once while I was out doing the final marking of a course late on a Friday before a Saturday morning race, past street supervisor Steve Weatherford came by just to make sure that everything looked good.

From my perspective, most important on the list was the city government support and willingness to partner. Primarily, every race benefits a local charity and most bring visitors to Salisbury, some in a very big way. Winter Flight is perhaps the best example. With tremendous community support, well over 300 runners took part and with participants from all over North Carolina and six more states, local motels and other businesses got a weekend boost from the 36-year-old event. Rowan Helping Ministries received a race proceeds check for $12,000.

Other cities with the “Runner Friendly Designation” include Memphis, Tenn., Richmond, Va., Lakeland, Fla. and some really big ones like Detroit, Mich. Once approved, the city remains on the list for five years and then must reapply. Especially interesting to me was the fact that of the 50 cities, I have cycled through at least 20 of them. The first cities were awarded the runner friendly designation in 2013 and some are in their second round of meeting the criteria.

Some individuals and groups played big parts in this. Director Nick Aceves and Hall Gym coordinator Steve Clark of Parks and Recreation, both helped with the application criteria and also with many of the programs that the city and runners club partner on. Aceves said, “We are excited to be recognized as a Runner Friendly Community. It is a great collaboration between the City of Salisbury, local businesses, community members and most importantly the Salisbury Rowan Runners Club.”

Clark is the race director for the Run for the Greenway 5K in July and PD Lieutenant Patrick Smith heads up the Foot Pursuit 5K for Special Olympics in May, both partner races for the Salisbury Rowan Runners. On average, about 15 races a year are held on city streets or at Salisbury Community Park. The same partnership offers Beginner Runner Classes held several times a year at city facilities.
Salisbury City Council received a plaque honoring Salisbury as a “Runner Friendly Community” on March 19.

Signs will be posted soon at entrances to Salisbury that bear the words “Runner Friendly Community 2019-2023.” Those signs will replace the “Fit Community” ones, another worthy honor previously won by Salisbury, but is no longer awarded.

The next race is the New Day 5K Trail Run held at Sacred Heart Catholic School on April 13. Entirely run off road, it is the city’s only current cross-country race. Last year’s inaugural event was well attended and managed, with organizers expecting an even bigger turnout this year.

This event and plenty more are at www.salisburyrowanrunners.org. More information about RRCA can be found at www.rrca.org