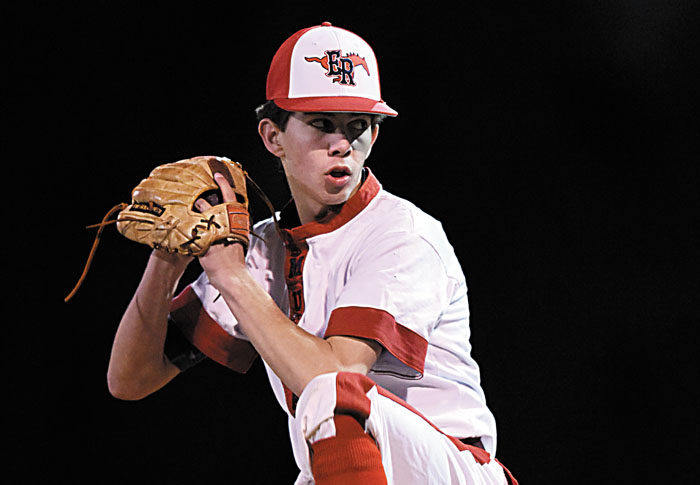 East Rowan pitcher JD Basinger was the winning pitcher on Friday night against Carson. ... File photo by Wayne Hinshaw, for the Salisbury Post

GRANITE QUARRY — A team starving for some good news got to pig out Friday night.

“We’ve been fighting ourselves all season,” junior catcher Charlie Klingler said, moments after East (6-7, 2-2) snapped a four-game slide and jumped back into the conference race. “We fell into a little slump, but we kept working in the cage and working at practice. It’s like we were due and everything paid off tonight.”

It paid off with interest. The loss put an end to Carson’s 10-game winning streak and dropped the Cougars (10-2, 3-1) into a tie for first place with idle West Rowan.

“We just talked in our huddle and nobody’s mad at anybody,” said Carson coach Chris Cauble. “We’ve just got to bounce back from this. You can’t walk four batters in an inning and get behind like that.”

He was talking about the last of the first, when Carson right-hander Deacon Wike couldn’t find the plate and East scored all of its runs. The lanky senior, an East Rowan transfer, had a meandering fastball that was all over the shop. He lasted only 14 pitches — 12 of them off the plate — and faced just three batters, walking each of them.

“That’s just something that happens in baseball,” said Carson catcher Garrett Alewine, a savvy veteran. “All of the great pitchers have nights like this now and then. It’s the nature of the game.”

It was an opportunity the Mustangs welcomed. They entered the game with a .181 team batting average and only six extra-base hits. And while they failed to pad those numbers, they put seven of their first eight batters on base and enjoyed a rare feast.

“We definitely needed something good to happen and it did,” said winning coach Brian Hightower. “I thought we played better tonight. It’s been a tough year, but that’s the way we like it — to be miserable. This is why you practice.”

The frowns East arrived with were turned upside down when cleanup hitter Avery Shull coaxed a walk from Carson lefty reliever Logan Rogers to deliver the game’s first run. With one away, Bryson Wagner drilled a run-scoring single into left field and teammate Griffin Warden followed with a long double to left-center that plated two more runs and provided a 4-0 lead.

“That first inning was big,” said Warden, a freshman outfielder who clocked the first pitch he saw from Rogers. “Our approach was to get ahead and try to get in their heads. We were first-pitch banging. Hightower had called me to the side and said, ‘The first pitch is all yours. You’ve got to go smack it.'”

Before Rogers could procure the last two outs of the inning on a forceout/interference call, East’s Blake White lined an RBI-single to right for a 5-0 advantage. “We knew what we had to do and went out and did it,” said Klingler. “We put the pressure on them early.”

Cauble, the Cougars’ sage 13th-year mentor, tried to put a positive spin on it. “Well, we still had six innings to go,” he said. “That’s what I told them. Let’s try to get a run each inning.”

Carson chipped away against pitcher J.D. Basinger, an unbeaten sophomore right-hander who struck out nine and won his third game. The guests scored single runs in the third and fourth innings, first on a Rogers infield hit and then on a sac fly by Cole Hales. Then in the top of the seventh — facing the hard-throwing Wagner in relief — CHS loaded the bases on a two-out error and back-to-back walks. Dandre Wilkerson made it 5-3 when he walked on a 3-2 pitch.

“Yeah, but I believed in Wagner,” Basinger said. “I knew he’d pull through for us.”

The bases were loaded when Carson’s last flicker of hope was doused. Alewine smashed a loud grounder that backup shortstop Maddox Henderson — a freshman promoted from ER’s jayvee squad — fielded cleanly and turned into a game-ending forceout.

“We had to win this game,” Warden emphasized afterward. “As soon as we got here, we decided this was a fresh start. Everything that already happened, we had to let go of. This was a new start.”