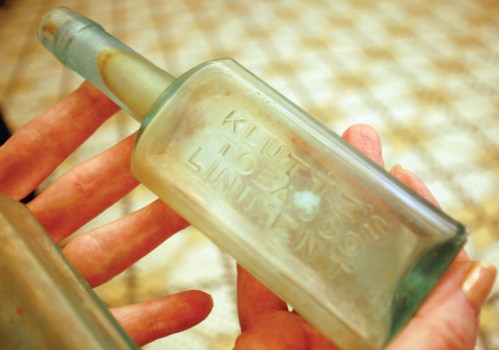 Several medicine bottles, such as this one for Kluttz's tobacco liniment, were found during archaeological excavations last fall off East Bank Street. It is believed the bottles date from the late 19th century and were not related to the Salisbury Confederate Prison site. Mark Wineka/Salisbury Post 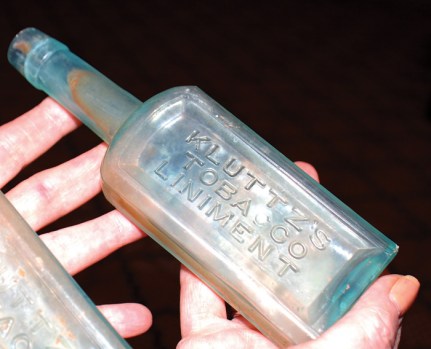 Several medicine bottles, such as this one for Kluttz's tobacco liniment, were found during archaeological excavations last fall off East Bank Street. It is believed the bottles date from the late 19th century and were not related to the Salisbury Confederate Prison site. Mark Wineka/Salisbury Post

SALISBURY — Taken individually, the glassware, shards of ceramics, construction materials, cut nails, bones from food remnants and general hardware might not be impressive.

But knowing they came from an area where the Salisbury Confederate Prison once stood piques the interest of any historian or archaeologist.

“We didn’t find much, but we did confirm there was more left to find,” Timothy Roberts said Thursday night to an audience wanting to hear about “ground-truthing excavations” done last November on a Historic Salisbury Foundation lot at 313 E. Bank St.

In essence, the digging by Cultural Resources Analysts of Richmond, Virginia, substantiated what ground-penetrating radar had shown in 2016 — that the back of the lot probably was part of a portico to a cotton mill that served as barracks for the prison.

Roberts, principal investigator and director of operations for CRA, reported on the dense concentration of brick, mortar and stone (granite) that seems to indicate a corner or edge to what had been a structure.

That excavation was on point with what was revealed by the ground-penetrating radar and GPS coordinates serving as the archaeologists’ road map.

“Although we wished that an intact portion of the foundation could have been uncovered,” said Steve Cobb, vice president for the Historic Salisbury Foundation board, “we realize that was unlikely, due to reports indicating that the building materials had been salvaged after the war.”

Both Cobb and Roberts said it was intriguing to think that some of those materials, especially the brick from the old mill, were likely incorporated into buildings that are still in downtown Salisbury.

“But we are thrilled that the configuration of the ‘robber trench’ that remains confirms the findings of the previous GPR study — that the old cotton mill was definitely located on the site,” Cobb said.

Hampered by rain, the CRA team eventually dug about a half dozen relatively shallow excavation pits during its days on the site and unearthed numerous artifacts, but not necessarily any related to the actual prison period.

They probably belonged to the layers of debris and development over the decades following the prison’s destruction in 1865. Of particular interest to many in the audience Thursday night were medicine bottles, completely intact, from Kluttz’s Drug Store.

The Kluttz Drug Store building still stands on the Square and is home today to Spanky’s restaurant.

Still, Roberts had encouraging words about the prison site.

“Our question was, ‘Is it there?'” he noted, and the evidence indicated it was. Future excavations might try, he suggested, to locate the other corner of the portico or determine how long the front of the prison was or how far out the walls extended.

Historians know the portico to have existed from drawings made of the mill building and Confederate Prison site, especially illustrations sketched by Union prisoner Robert Knox Sneden in late February 1864.

As part of his presentation Thursday night at the Salisbury Station, Roberts talked about the importance of personal recollections and illustrations by prisoners, historical records and the archaeological digs related to the prison that came before his in 1983 and 2005, along with the University of North Carolina at Greensboro’s GPR work in 2016.

This particular excavation was paid for through a $10,000 National Parks Service grant channeled through the State Historic Preservation Office. Historic Salisbury Foundation contributed an additional $7,500.

The lot at 313 W. Bank St. was donated to Historic Salisbury Foundation several years ago by Jim and Gerry Hurley. The house that stood on the narrow lot burned down in the 1990s.

The expansive prison site spread east of the railroad tracks on both sides of today’s Bank Street and beyond. In the years after the war, it became a residential area.

Only one prison-related building, thought to have been used as a guardhouse, still exists, and it is located along the railroad tracks on the downtown side of the East Bank Street bridge.

Roberts said the cotton mill came to be owned by Salisbury Manufacturing Co. In 1848, Maxwell Chambers of Salisbury bought the property, and after his death in 1855, ownership eventually went to Davidson College, which ended up selling it to the Confederacy for a prison.

By 1864, conditions at the prison worsened considerably because the site was thousands over capacity, with possibly as many as 10,000 prisoners. Disease and starvation led to thousands of deaths, along with instances when prisoners stormed the guards and were shot.

Many of the lost Union prisoners and others were buried in trenches that would become part of Salisbury National Cemetery off Military Avenue after the war.

Structures on the site became dedicated to hospital space, and prisoners were forced to improvise their own shelters on the grounds. They dug out sleeping holes, and many tried to escape through tunnels.

Virtually all the prisoners were transferred out of the site in February 1865 through a prisoner exchange program. That didn’t keep Union Gen. George Stoneman from burning down the prison when he arrived in Salisbury in April 1865, right at the Civil War’s end.

Roberts said it wasn’t surprising, for example, that no uniform buttons were found or bone trinkets smoothed by stones because Union prisoners would have traded anything of value for food.

Cobb said Historic Salisbury Foundation was “very pleased with the professional way CRA performed the dig,” in spite of the terrible weather the excavation team faced, “as well as the outstandingly detailed written report (and extensively inventoried artifacts) that they provided to us.”

“Tim Roberts went above and beyond the call of duty to come back to Salisbury and talk about their findings,” Cobb said. “It’s clear that his interest in this project went well beyond a contractual obligation — he became an expert in the history of the prison and of Salisbury and Rowan County during the war, which aided greatly in his interpretation of what was found.”

Cobb said in his conversations with Roberts after his presentation that Roberts indicated “this is an extremely significant site—one that is definitely worthy of further exploration.”

Cobb said Historic Salisbury Foundation is currently looking at the feasibility of memorializing the site as a significant location in the history of the Civil
War.