Woods’ big run sends him to weekend against McIlroy 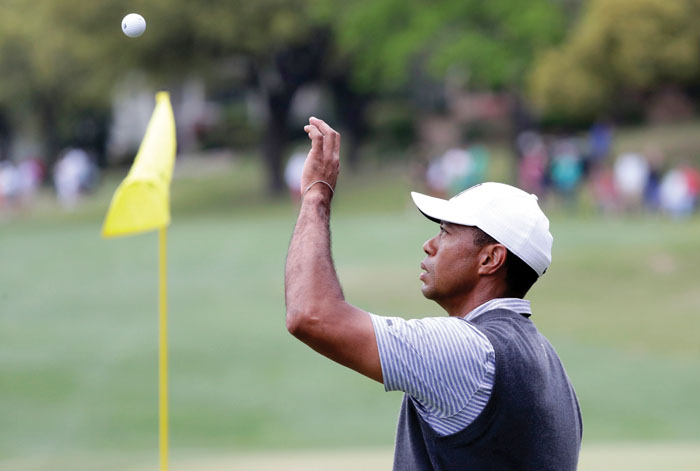 By DOUG FERGUSON AP Golf Writer
AUSTIN, Texas (AP) — Tiger Woods gave the fans all they could ask Friday in the Dell Technologies Match Play.
And then Rory McIlroy gave them a little more.
Both won their matches, about 30 minutes apart, setting up a Saturday morning showdown between golf’s biggest name and its hottest player, only one of them moving on to the quarterfinals of a bracket that has only five of the top 16 seeds remaining.
“We’ve played tournaments together, battled each other down the stretch at event, but never in a match-play situation,” Woods said. “It’ll be fun.”
It was plenty fun getting to that point.
From massive, multi-level hospitality tents along the back nine at Austin Country Club, fans turned every direction possible as Woods made a 20-foot birdie to tie his match, a birdie to lead and then holed out from 83 yards for eagle to seize control against Patrick Cantlay.
He wasn’t finished.
Woods won a fourth straight hole with another 20-foot putt, and cheers from a half-mile away could be heard from fans inside corporate chalets watching on TV.
“Just got hot right when I needed it,” Woods said after his 4-and-2 victory.
Two groups behind Woods, McIlroy was rolling to another victory and took out Matt Fitzpatrick, 4 and 2. It was his third victory in as many matches this week. McIlroy has never trailed and has led in 37 of the 42 holes he has played.
Woods and McIlroy have never faced each other in match play, except for a pair of medal match exhibitions in China earlier this decade that McIlroy won both times (67-68).
They last time they squared off when it counted was in the final round last year at the Tour Championship, where Woods capped off his return from back surgeries with his first victory in five years.
“I just hope I put up a better fight than I did in Atlanta last year,” McIlroy said. “I didn’t have much of a game that day. But yeah, look, it’s exciting. It’s exciting for the tournament. I’m sure it’s going to be exciting for us. I feel good about my game. I played well all year. I’ve continued to do that this week. So it will be exciting.”
Woods (No. 13) and McIlroy (No. 4) were among only five top seeds to advance from their groups, joining Justin Rose (No. 2), Francesco Molinari (No. 7) and Paul Casey (10).
The World Golf Championships event now heads into single elimination, and it has a distinctive European flavor deep in the heart of Texas. A record eight Europeans have advanced to the Round of 16, breaking by one the most last done in 2013.
That includes Henrik Stenson, who emerged from the group of major champions by beating Jim Furyk. It does not include Jon Rahm, who was trying to force a playoff with Matt Kuchar until the American drove the 18th green and won with a birdie.
And for the third straight year, the weekend near the University of Texas will not include ex-Longhorn Jordan Spieth.
Spieth opened with four straight bogeys and was 4 down to Bubba Watson and nearly clawed his way back. He needed to win the last hole to have any chance to advance, but Watson caught a break with a bounce off a tree and made birdie for a 1-up win.
It wouldn’t have mattered. Kevin Na, on the verge of withdrawing Thursday with his sore neck, beat Billy Horschel to win the group.
Two groups had to go to playoffs, where Kevin Kisner beat Ian Poulter on the third extra hole. Poulter had beaten Kisner on Wednesday, but head-to-head results do not matter in deciding ties in group play.
In the other playoff, Li Haotong hit wedge to a foot to beat Alex Noren.
One match dwarfed them all. Woods hasn’t competed in Texas since 2005, and he hasn’t been in the Match Play since 2013. He had to beat Cantlay and have Aaron Wise knock off Brandt Snedeker to have any chance of advancing.
Cheers of “Go Tiger!” often were followed with “Go Aaron Wise.”
Woods gave away holes with a poor flop shot behind the sixth green and a mediocre chip on No. 8 to fall 2 down. Cantlay, whose tee shot on No. 9 took a hard hop and wound up in the ravine, still had a 1-up lead when it all turned on the par-3 11th.
Woods holed a 20-foot birdie putt to square the match. Then, he made a 7-foot birdie putt to take the lead.
And then it was time for a decision.
The 13th hole played only 276 yards, all over water, a stiff breeze into them. Woods could tell Cantlay was leaning toward driver, and he opted to hit iron off the tee. Cantlay’s drive was settled in a knob above the green, 40 feet from the hole for a chance at eagle.
“I knew I needed to put it up there to at least have a chance at 3, to force him to have a good pitch,” Woods said.
It worked out to perfection. The ball stopped about 5 feet behind the hole on its second bounce and gently spun back toward the hole as fans in the double-decker hospitality tent behind the green rose to their feet and let out the loudest cheer of the day when it dropped.
Woods still needed help and says he didn’t bother looking at scoreboards to check on the Snedeker match. It was a mismatch. Wise never trailed, was 2 up at the turn and won four of the next five holes to close out Snedeker.
McIlroy, coming off a victory in The Players Championship in his last start, has played so well this year that he has a chance to return to No. 1 in the world if he were to win this World Golf Championship.
He still has to win four matches, starting with a big one Saturday morning.