Tiger Woods down, but not yet out at Dell Match Play 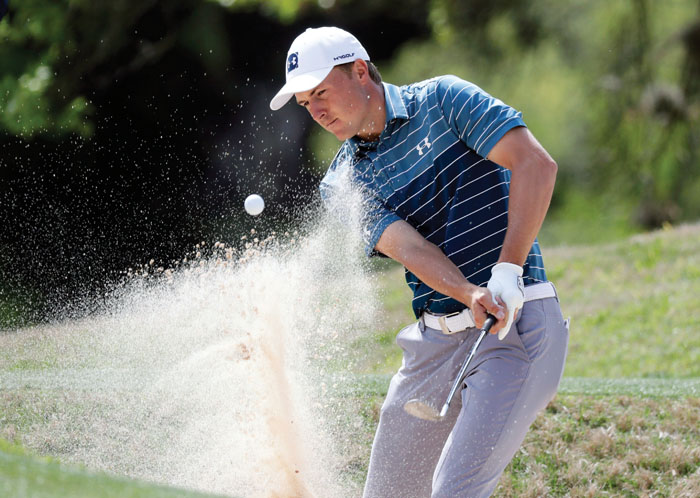 AUSTIN, Texas (AP) — Tiger Woods lost his match and got off easy.

At least he still has a chance in the Dell Technologies Match Play.

Brooks Koepka needed to birdie the 18th hole at Austin Country Club to avoid elimination, and he was out of luck when Li Haotong hit a wedge from the rough that stopped inches from the cup.

For players like Keegan Bradley, Patrick Reed and Webb Simpson, a tie felt like a loss because that’s exactly what it was.

They all were among 20 players — a group that includes defending champion Bubba Watson and Phil Mickelson — who were mathematically eliminated Thursday. With one round-robin sessions remain, the Match Play began to take shape, not so much from who has the best chance to advance out of group play into the weekend knockout stage, but who has to show up Friday for a match knowing they’re going home, win or lose.

Woods, who lost on the 17th hole to Brandt Snedeker, can still advance if he wins his match and Snedeker loses or halves his match.

“All I can do is hopefully get a point tomorrow and see if that’s good enough,” Woods said.

Jordan Spieth is still alive after building a 6-up lead through 12 holes on Kevin Na, but not winning until four holes later when Na missed a 4-foot birdie putt. Jim Furyk and Henrik Stenson emerged with 2-0 records from the group of major champions.

They play Friday after knocking out Phil Mickelson and Jason Day.

Snedeker took advantage of too many mistakes by Woods off the tee and on the greens for a 2-and-1 victory, a big one for Snedeker because of his opponent’s name and reputation. But it was just one win.

Snedeker first has to beat Aaron Wise, who was eliminated when Cantlay beat him, and he would only advance if Woods beats Cantlay. Otherwise, Snedeker could face a sudden-death playoff against Cantlay if he wins or against Woods if Snedeker ties his match.

“See you on the first tee tomorrow,” Billy Horschel said with a smile and a wink to Spieth.

Horschel and Spieth halved their match in the opening round, both won on Thursday, and if they win again — Spieth faces Watson, Horschel gets Na — they would be in a playoff to determine who reaches the knockout stage on the weekend.

Woods, back in the Match Play for the first time since 2013, has never been part of this round-robin format. All that mattered was trying to win his match, and he never led against Snedeker. He still provided one of the most remarkable halves on another action-packed day.

Woods was 1 down when hit his second shot under a bush on the 10th hole, leaving him little option but to take a penalty drop. Snedeker saw it and played his third shot conservatively to about 4 feet. In his mind, he was 2 up heading to the next tee.

Instead, Woods dropped to his right knee to play a left-handed shot , inverting the club and holding it parallel to the ground. He not only made contact, the ball bounced out to about 4 feet and he made the par putt. Snedeker had to make his putt to keep the match from being tied, which he did.

Three holes later, Woods hit iron off the tee and pulled it left into the Colorado River, making double bogey to fall 2 down. Snedeker seized control with a 10-foot birdie on the 16th, and closed him out on the next hole.

“I’m probably the most hated man in Texas right now,” Snedeker said. “I bet you my kids were probably rooting for him late in the round.”

Dustin Johnson, the top seed for the third straight year, lost to Branden Grace when the South African poured in a big birdie putt on the 17th and Johnson couldn’t win the final hole. That leaves Johnson needing help to win his group.

Justin Thomas recovered from his opening loss to beat Matt Wallace. His chances are alive under various scenarios.

“Any key is to win this match today,” he said.

Justin Rose delivered the best comeback. He was 3 down with four to play against Eddie Pepperell when he rallied to earn a halve with birdies on the last two holes. Cheering him along outside the ropes was Mark “Fooch” Fulcher, his caddie who is recovering from a heart operation and worked nine holes of practice as he readies his return to Rose’s bag at the Masters in two weeks.

“He’s been walking on the sidelines and gave me, ‘Come on, Rosie.’ I could tell he hadn’t given up on me,” Rose said. “Picked me up a little bit and made me dig a little deeper possibly.”

Furyk wasn’t planning to be in Texas this week. It wasn’t until a runner-up finish in The Players Championship two weeks ago — he was among the last into the field at the TPC Sawgrass — that allowed him to crack the top 64 in the world to qualify for Match Play.

A victory Friday is likely enough to get him into the Masters.

“I guess I’m not really upset with anything right this second,” Furyk said. “I feel pretty consistent and pretty solid throughout my game.”