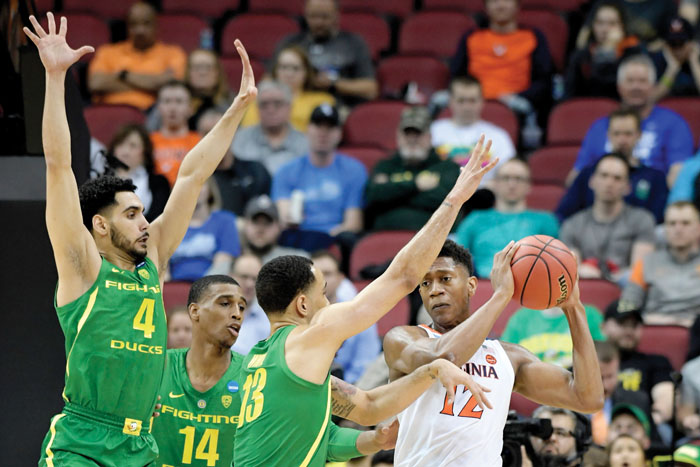 By GARY B. GRAVES AP Sports Writer
LOUISVILLE, Ky. (AP) — Ty Jerome scored 13 points, including a go-ahead 3-pointer with 3:34 remaining, and No. 1 seed Virginia reached its second regional final in four years with a 53-49 victory over No. 12 Oregon on Thursday night in the NCAA Tournament.
The Cavaliers (32-3) shot 36 percent and matched a season low in scoring, but got baskets when needed to outlast the Ducks (25-13). Jerome’s 3 was the biggest as he took Kehei Clark’s pass and converted from deep to make it 48-45.
Virginia clamped down from there holding Oregon scoreless for more than five minutes after the Ducks went ahead, 45-42, on Louis King’s 3 with 5:43 left.
Clark tied it with a 3 with 5:21 left and De’Andre Hunter got free for a layup for 24 seconds left for a five-point edge that was enough to stop Oregon’s 10-game winning streak.
Clark finished with 12 points, six assists and four rebounds. Mamadi Diakite grabbed 11 rebounds as Virginia edged Oregon 34-31 on the glass.
King’s 16 points led Oregon, which shot 38 percent. The Ducks had hoped to reach their third Elite Eight in four years.
BIG PICTURE
Oregon: After beating opponents by an average of 18 points during their run, the Ducks were slowed down and then shut down by Virginia. They made just 9 of 25 from long range and were caught off guard defensively several times as Virginia found its post men inside and topped the Duck 18-14 in the paint.
Virginia: The Cavaliers continued their mastery at the KFC Yum! Center, winning their fifth consecutive visit. This one wasn’t pretty, but it was effective.
UP NEXT
Virginia: South Region final on Saturday against third-seeded Purdue.
___
More AP college basketball: https://apnews.com/ Collegebasketball and https://twitter.com/AP_Top25