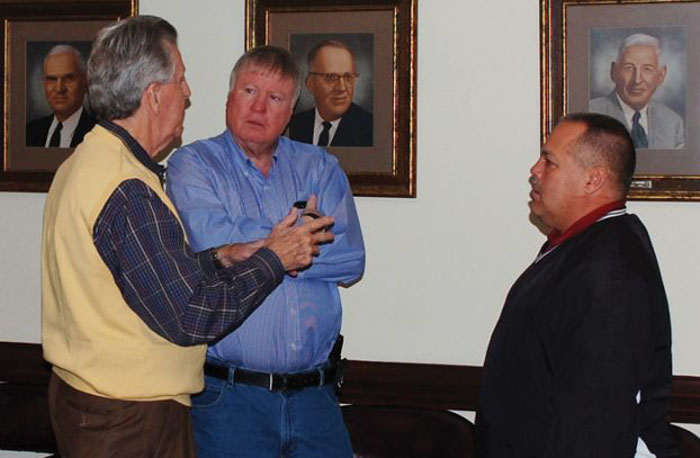 LANDIS — Amid a State Bureau of Investigation probe, the Landis Board of Aldermen on Thursday received the first of many presentations about the 2019-20 fiscal year budget.

Interim Town Manager Kenny Isenhour spoke about the differences in this year’s budget workshops compared to those in previous years.

“There have been some concerns of last year’s budget — some of which I cannot go into,” Isenhour said. “We’re doing something different this year in the interest of transparency. We’re doing a zero-based budget this year, which means we’re going to start with what we owe and we’re going to go forward there and end up with any additional projects the board wants to see included.”

Alderman Bobby Brown said he would like to see line items and a breakdown of expenses as the board continues its budget meetings.

Hosey said that is a priority, especially since a new finance officer will be appointed once the town has left the cloud of the ongoing state investigation.

“In the short period of time I’ve been the finance officer, I’ve had a difficult time looking at the general ledger and going back to the budget trying to figure out why they took this out of that,” Hosey said. “A lot of it just doesn’t make sense. So, working with our accountant is one thing we’ve discussed with the LGC. The budget is a tool as much as anything.”

Officials from the State Treasurer’s Office Local Government Commission, which performs financial oversight of local governments across North Carolina, have been meeting with town staff to work toward better financial practices.

Former Town Manager Reed Linn and Finance Officer Ginger Gibson are the subjects in a State Bureau Investigation probe into allegations of embezzlement. The two resigned, and Isenhour and Hosey were appointed in the interim. Previous years’ budgets had unexplained expenses, and the Local Government Commission raised concerns about overspending and end-of-the-year budget amendments.

“We can’t get into specifics because of the investigation,” Hosey said. “Everyone here is an adult, and everyone here knows it is a simple fact that in this process, we’re having to start at ground zero because I can’t trust anything. I can’t look at a document and trust it.”

Hosey said residents can speculate about previous years’ budgets but the budget will be broken down and self-explanatory going forward.

“It will become more clear in the future,” Hosey said. “There were reasons the budget was hard to interpret. I can assure you that is not going to be the case this year.”

Mayor Pro Tem Tommy Garver spoke on the checks and balances the board and town officials will have. Board members will be able to view bank and credit card statements.

“This board and all future boards will need to be and should be much more involved in the financial health going forward, not just twice a year when we get reports,” Garver said.

Hosey told the aldermen the town has a debt of $17.66 million from various projects, including the Catawba Nuclear Station, water and sewer bonds, and jet-vac and police car expenses.

The town has $146,100 in annual leases. Hosey said town officials will evaluate if the leased equipment is necessary.

The requested budgets for town departments include:

• $133,000 for electric to provide regulators for Substation 3, work truck replacement, contract underground installation at Oaks of Landis and a primary fault locator.

• $38,500 for parks to purchase a parks vehicle, sand and gravel for boat launch repairs, playground benches, and replacement pool furniture.

• $97,000 for streets for a leaf machine, zero-turn mowers, replacement of trimmers and leaf blowers, and traffic cones and barricades

Brown said he would like to see the street program continued, but he was not willing to comment further about the departments’ requests until the board sees income amounts. Other aldermen agreed.

Hosey also said the projected property tax base of $298.1 million would mean more than $1.5 million in revenue at the current rate.

Hosey said the presentation would be posted online Friday at townoflandis.com/transparency.

The Board of Aldermen will meet at 7 p.m. Monday at Town Hall for its monthly meeting.