Harper a hit without connecting as Phillies top Atlanta 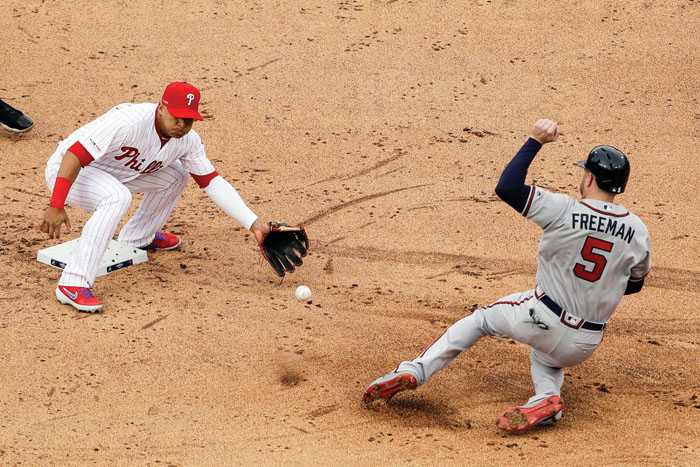 PHILADELPHIA (AP) — Bryce Harper had already struck out twice in his $330 million debut when he was set to dig his gaudy green Phanatic spikes in at the plate in the seventh inning.

With two runners on base and no outs, Harper never got the chance to swing the bat with “ill” — as in, part of the Phillies — stamped on the knob. He was intentionally walked to bring up Rhys Hoksins, and he quickly flexed the power that proved just how dangerous Philadelphia can be.

Harper went 0 for 3 with an intentional walk and failed to deliver a big hit — but no worries, the Phillies picked up the scoring slack. Hoskins hit a grand slam set up by Harper in a 10-4 win over the Atlanta Braves on Thursday.

Harper had the city electric in anticipation for his first game in Philly since he signed a $330 million, 13-year deal that was briefly the richest in baseball. He bowed to thousands of fans in No. 3 jerseys who gave him rousing standing ovations and chucked a ball into the third deck for a souvenir.

He never launched one there with his bat.

Harper’s presence in the lineup helped blow the game open when the Braves walked the lefty slugger to load the bases. Hoskins, once the franchise player, followed with a grand slam off reliever Luke Jackson that blew open the game.

Citizens Bank Park was packed with nearly 45,000 fans dressed like their new favorite player and ready to go wild, hours before the first pitch. Harper fist-bumped fans as the Phillies walked through the outfield stands and onto the red carpet on the field for opening day festivities. He got his first standing O when he jogged out for the lineup introduction — his green cleats visible from the last row of the upper deck — and heard another when he dug in for his first at-bat in the first inning.

“It was pretty unbelievable to be a part of it,” Harper said.

He capped the win with a celebratory dance with his fellow outfielders he designed off a video game.

The other NL MVP pickup this offseason for the Phillies delivered instantly: Andrew McCutchen , who signed a $50 million, three-year deal, led off the game with a homer to left off Braves starter Julio Teheran (0-1).

Maikel Franco hit a three-run homer to left in the sixth inning for a 6-1 lead in a fun day in Philly against the defending NL East champions.

Aaron Nola (1-0) was uncharacteristically wild, walking five in six innings; one more than any start in 2018 when he was third in Cy Young Award voting.

“When he got the lead, he was a different animal,” Braves manager Brian Snitker said. “It’s like all great pitchers are.”

Harper grounded out, then struck out his next two times up against Teheran. The Phillies had nine All-Stars, two MVPs, one Cy Young Award winner and one Rookie of the Year award winner on the roster. The average age of the 25-man roster is 28.5.

Phillies fans left jerseys of their 2008 favorites at home in favor of fresh Harper gear in one of the warmest opening days in Philadelphia in recent memory.

“Bryce brought the sunshine,” a smiling security guard said as he checked backpacks.

Harper walked into the ballpark wearing a black T-shirt dubbed “Phan Fiction “ made by South Fellini that featured Philly mascots the Phanatic and Gritty in a “Pulp Fiction” homage. Fans slammed the website and caused it to temporarily crash, and by the time it was up, the shirt was sold out.

The first game of the season looked like a lot of Octobers from the Phillies last glory era that ended in 2011. One fan held a sign that said “The Year of Bryce.”

“Just bring some fun to the game. The Phanatic is always happy and smiling, so why not?” — Harper on his Phillie Phanatic cleats.