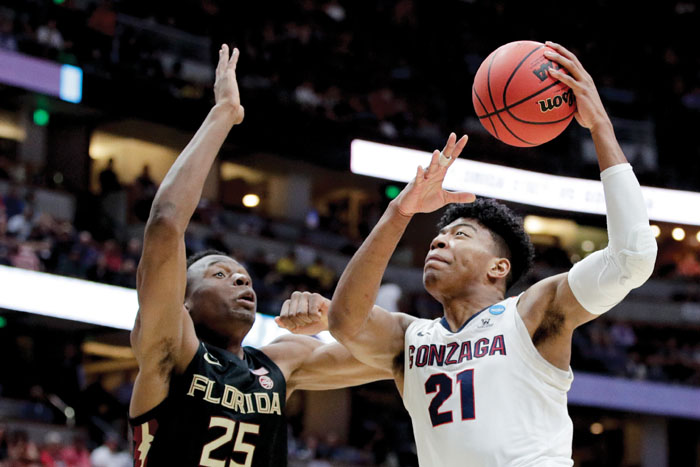 ANAHEIM, Calif. (AP) — Gonzaga is in the Elite Eight for the fourth time in history following a 72-58 victory over Florida State in the opening West regional semifinal on Thursday night.

Rui Hachimura scored 17 points to lead the top-seeded Bulldogs, while Brandon Clarke had 15 points and 12 rebounds as Gonzaga returned to the regional final for the second time in three seasons.

Josh Perkins and Zach Norvell Jr. each scored 14 points for Gonzaga, which led most of the game. Florida State pulled within four with less five minutes to play but the Bulldogs closed with a 12-2 run and avenged last year’s loss to the Seminoles in the regional semifinals.

Trent Forrest led fourth-seeded Florida State (29-8) with 20 points. The Seminoles advanced to the Sweet 16 in consecutive seasons for the first time since 1993, but fell one step short of another trip to the Elite Eight.

Florida State played without senior Phil Cofer, who learned after his team’s first-round win over Vermont that his father, former NFL player Mike Cofer, had died after a long illness. The funeral is Saturday in Georgia and Cofer is with his family. The Seminoles left an open spot for Cofer when they lined up in pregame for the national anthem.

Gonzaga used a 16-5 run to break open the rematch and take a 30-17 lead in the first half. The Bulldogs missed their first three 3-point attempts but recovered to hit 4 of 6 from behind the arc during the run. The Seminoles committed three turnovers and were 2 of 9 from the field.

Gonzaga led by as many as 14 in the first half before the Seminoles got within eight late in the half. The Bulldogs seized momentum before the break when Perkins stole the ball from Trent Forrest and made a three-point play with .4 seconds remaining to give them a 38-27 lead at halftime.

Corey Kispert’s dunk gave the Bulldogs a 55-42 lead with 12:14 remaining when Florida State made one final rally. Forrest scored seven points during a 14-5 run to get the Seminoles within 60-56 with 4:11 remaining, but they could not get any closer.

Gonzaga: The Bulldogs came into the game leading the nation in field goal percentage (53.2 percent) but shot just 25 of 62.