Freshmen lead Michigan State past LSU and into Elite Eight 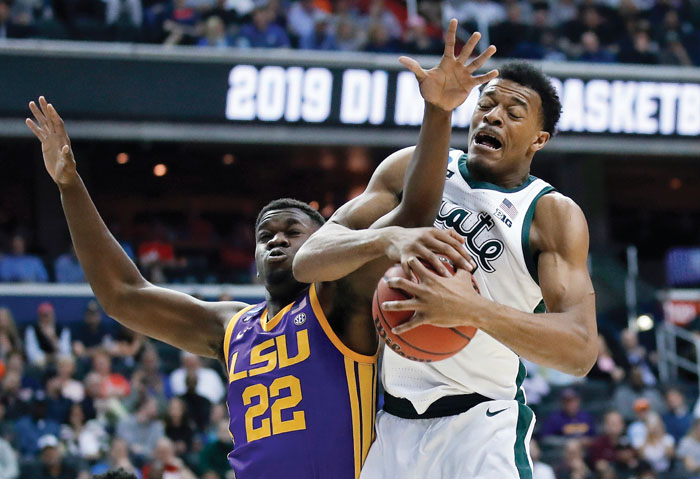 By STEPHEN WHYNO AP Sports Writer
WASHINGTON (AP) — For all of Michigan State’s veteran experience, its freshmen led the way into the Elite Eight.
Aaron Henry scored a career-best 20 and fellow frosh Gabe Brown had 15 as the second-seeded Spartans beat third-seeded LSU 80-63 on Friday night to move on to the NCAA Tournament’s East Region final.
Coach Tom Izzo’s upperclassman-heavy team is one victory away from its first Final Four appearance since 2015.
Michigan State took it to LSU on the glass, outrebounding the Tigers 34-20. At halftime, Michigan State had as many offensive rebounds as LSU had total boards, at times making it look like 5-on-4 when the ball came off the rim.
It didn’t bounce off the rim much for the Spartans early as they took advantage of an LSU defense that left them uncontested 3-point shots. Michigan State had five 3s in the first 10 minutes alone, and LSU never adjusted defensively.
Tremont Waters scored 10 points during a 13-0 LSU run spanning the first half into the second to cut the deficit to four. Then Michigan State blew the game wide open with 3-pointers. The Spartans hit four of their first five 3-point attempts out of halftime.
Henry did his best Draymond Green impression as the do-it-all 6-foot-6 forward was all over the offensive end. He had eight rebounds and six assists and was 9 of 14 from the floor.
Brown came in averaging 2 points a game and scored more than he had in his past 11 games combined. Brown had just five points in the Spartans’ past 12 games, but became a central figure against LSU.
Standout point guard Cassius Winston went toe-to-toe with Waters and finished with 17 points as one of four Michigan State players in double figures.
Michigan State faces the winner of the matchup between overall top seed Duke and No. 4 seed Virginia Tech in the regional final Sunday. This is Michigan State’s fifth Elite Eight appearance in the past 11 years and 10th under Izzo.
WHAT NOW, LSU?
The loss plunges LSU into uncertainty given the corruption scandal that left coach Will Wade suspended indefinitely for comments he reportedly made about his recruiting efforts on a phone call that was wiretapped as part of an FBI investigation.
It’s unclear what ramifications the program will face and whether Wade will coach LSU again. Freshman Javonte Smart, who was a surprise starter against Michigan State, is the player Wade was recorded as saying he’d “take care of.” Meanwhile, forward Naz Reid is a candidate to enter the NBA Draft.
WARD INJURED
Michigan State big man Nick Ward appeared to reinjure his left hand in the second half and left the game. Ward was playing with a brace on the hand after breaking it in February and missing five games.
WINSTON MAKES HISTORY
With his fifth assist, Winston set a new Michigan State single-season record. He finished with eight. Mateen Cleaves set the previous record of 274 in 1998-99, the year before leading the school to a national title.
UP NEXT
Michigan State versus Duke would be their sixth NCAA Tournament meeting and first since 2015. Duke has won four of the previous five. The Spartans have never faced Virginia Tech in the tournament.
___
More AP college basketball: https://apnews.com/MarchMadness and http://www.twitter.com/AP_Top25