Expectant situation: There’s something in the water at Salisbury Fire Department 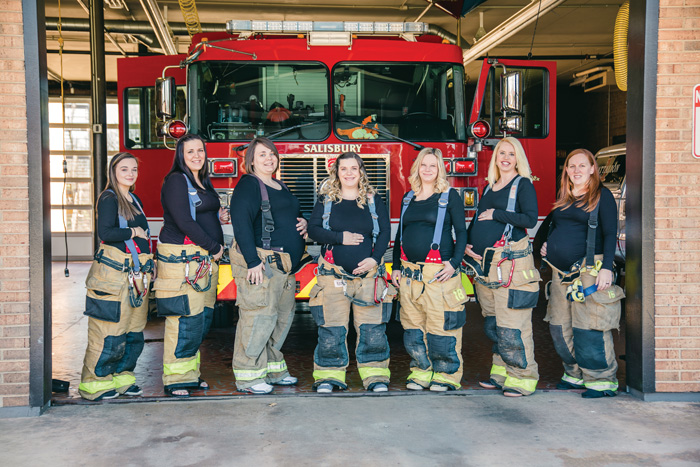 Dressed out in gear for a recent photo shoot, seven significant others, all expecting, of Salisbury firefighters pose in front of a firetruck at Station No. 1. They are, from left, Bridgett Roseman, Amber Overcash, Brittany Summers, Kaylen Renfrow, Crystal Carter, Stephanie Martin and Chelsea Cline. The babies are due between next week and September. Photo courtesy of Brianna Mitschele of Flashpoint Photography

SALISBURY — Firefighters become like family to each other, but things are going to the extreme at the Salisbury Fire Department.

Have the storks gone mad?

At the moment, there are seven expectant spouses or fiancées of Salisbury firefighters. The women are due between next week and September. It looks as though four girls, two boys and a baby whose gender is still to become known are on their way.

Many of the names already have been chosen, such as Lydia Rae, Gavin Todd, Mellie Jade, Cara Belle and Calvin Lee. The cool part is that many of these children will grow up together as part of the inclusive Salisbury Fire Department family.

“It’s been the topic of conversation the last couple weeks as it all melds together,” Fire Chief Bob Parnell said. “We’re really very excited for the deliveries to start.”

The seven new babies this year will join two others who were born last fall within the department — Capt. Lauran McCulloh’s girl in November and engineer Michael Freeman’s girl in October.

The Fire Department has 86 full-time men and women on its roster overall, meaning over the past six months almost 10.5 percent have welcomed or are now preparing to welcome a new child into their families.

Water, for sure, is the essential element in fighting fires, but something must be in the water at the Salisbury Fire Department.

“There could be,” said one of the expectant mothers, Kaylen Renfrow, who added she offered to take some water from the fire station to someone at her work who would like to be pregnant.

All these pregnancies have led, of course, to considerable conversations at the firehouses, attention from news outlets and discussions on social media.

For the record, here are the seven expectant couples:

• Chelsea and Capt. Jeremy Cline are expecting a girl next week.

• Stephanie and engineer Josh Martin also are expecting a girl in April.

• Crystal and Lt. Stephen Carter are expecting a girl in April, too.

• Kaylen and engineer Chris Renfrow are due in May — a boy.

• Brittany and engineer Curtis Summers are expecting a girl in June.

• Amber and engineer Alan Overcash’s boy is due in August.

• Bridgett Roseman and her fiancée, firefighter Aaron Blackwelder, are due in September. They do not know the gender yet.

The pregnant women naturally have become even closer with each other in recent weeks and months.

“I think it’s good to have that support,” Chelsea Cline said.

“Especially with the crazy schedules of the guys,” Kaylen Renfow added.

The pending arrival of seven new “recruits” with the Fire Department drew the attention of Brianna Mitschele, a former Salisbury firefighter who left the department in 2017 to pursue her other passion — photography.

In Denton, she opened Flashpoint Photography, a name reflecting her continued love of firefighting. Before her departure from the Salisbury Fire Department, she had attended rookie school with Curtis Summers and worked with several of the other men whose wives are now expecting.

Through the firefighting grapevine, Mitschele heard that Chelsea was pregnant, then Kaylen, “then it kind of trickled down from there.”

She realized that seven pregnant women — all significant others of firefighters from the same small-city department — might make a great photo shoot. Mitschele managed to gather all seven women together at Station No. 1 last Saturday and did her thing, putting them in fire gear and posing them in front of the bays and firetrucks.

Mitschele also had onesies printed up for each baby with the Fire Department logo, their daddies’ station numbers, and the firefighter names (and baby names, if known) on them.

Mitschele said she had to “snatch up this opportunity” to record an important time in the department’s history.

She gave the onesies as a gift. She also asked the mothers to bring whatever else they might want to have pictured, such as ultrasounds and clothing.

Just as Mitschele and the women were finishing up, the rescue truck received a medical call, leaving with lights flashing and air horn blaring.

Everyone felt right at home.

“It was a blast,” Brittany Summers said of the chance for all the women to get together in one place. “It was a lot of fun, and it turned out great.”

The mothers-to-be say they look forward to the months and years down the road when all these children and families can reunite and compare notes. It’s also quite possible, of course, that some of the kids will grow up as playmates.

Chelsea Cline says her son and McCulloh’s oldest child have done just that.

Mitchele already is planning another photo shoot this fall, after all the babies have arrived. She hopes to add the McCulloh and Freeman girls to the group, making nine kids, enough for a department baseball team.

Meanwhile, Parnell says complete strangers who have heard of all the expectant families at the Fire Department have been leaving gifts such as diapers and onesies at the main station.

“The people of this community really are great,” Parnell said.

April issue of Salisbury the Magazine is now available