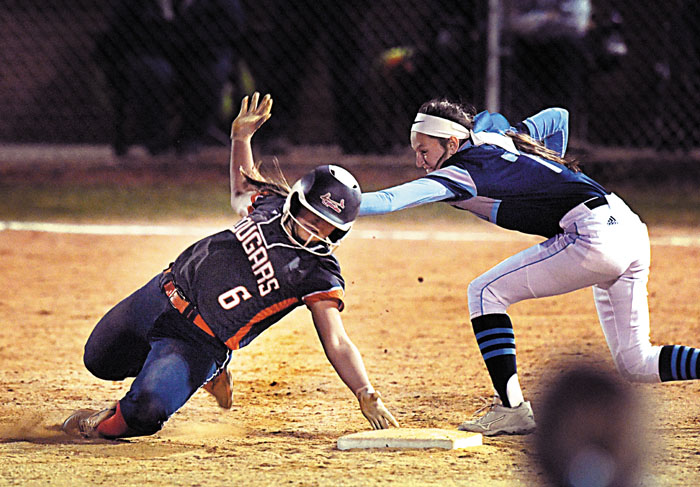 MOUNT ULLA — First place. It is just about the last place coach Jimmy Greene and the West Rowan softball team expected to find themselves Thursday night.

The Falcons reshaped the NPC landscape and climbed to the league’s top floor following a molar-grinding, 4-3 victory over visiting Carson. West erased an early three-run deficit and prevailed when both Taylor Walton and Hannah Pratt produced run-scoring hits in the bottom of the seventh inning.

“That’s why we love softball,” Greene said, moments after West (9-2, 4-0) won for the seventh time in its last eight games. “It was just a fun game to be a part of. Carson is still the team to beat in the NPC. They beat us last year and won the conference tournament. And when they came out swinging, I wasn’t sure about first place.”

West shortstop Mary Sobataka scored the winning run with one away in the final inning, making a hard-luck loser of Carson senior Katie Jewell.

“This team,” Sobataka said, after racing home on Pratt’s bunt single to the left side. “This team has the Never-Give-Up factor. That’s what allowed us to get the win. We knew it was a big game and what was at stake. When we finally got the momentum, we didn’t let it die.”

The Cougars (7-5, 3-1) held the early advantage, jumping to a 2-0 lead in the top of the first against winning pitcher Whitley Arnott. Jewell grounded a two-out single into right field and crossed when teammate Kary Hales belted a home run over the fence in right-center.

“We knew coming into this game that (Arnott) throws with a lot of speed, but struggles with control,” said Carson coach Charissa Duncan. “We decided to stay within ourselves and control ourselves — and Kary is an amazing example of that. She’s a competitor who hones in on what she needs to do and finds that pitch that she can drive.”

Hales found another one in the top of the third, when her sacrifice fly plated Maci Cooper with Carson’s third run. West, meanwhile, stranded baserunners in scoring position in both the first and third innings before breaking through in the last of the fourth. Walton opened the inning with a screeching line drive that cleared the fence in right-center field.

“Let me tell ya, Walton is clutch,” Greene said. “That girl is a hitter. That home run was as hard a ball as I’ve seen hit in a long time. It didn’t get 15 feet off the ground. She mashed it.”

Walton, a left-handed slugger, hit a two-strike pitch. “It’s not about me getting a home run or hitting it into the trees,” she said. “I just wanted to get on base and give the people behind me a chance. But when I saw that pitch, I had to pull the trigger.”

The Falcons inched within 3-2 on an unusual 9-1-5-4 Carson double play in the last of the sixth. With runners at second and third and one away, Arnott lined a run-scoring single to right — but the play went off the grid when both KK Dowling and Arnott were tagged out wandering off base.

“Actually, a good accident for us,” said Duncan. “Our right-fielder (Tate Burger) was going to throw to first and try for that out, but her throw came in to the infield and we caught two runners really far off the bag.”

Arnott, a junior who struck out seven in a complete-game effort, settled down and yielded only two singles after the second inning. She worked out of minor jams in the fourth and sixth innings, then escaped unharmed after Carson loaded the bases with one out in the top of the seventh.

“That’s the thing about Whitley,” Sobataka said. “She’s always going to find her way. She’s a smart pitcher who has the drive and the will to get ahead of hitters.”

Walton agreed. “That was one of her best games,” she said. “She stayed dialed in. She didn’t let that home run in the first inning get to her. She just kept pitching her game.”

Kenadi Sproul ignited West’s seventh-inning rally when she served a one-out base hit into left field. She scored the tying run on Walton’s RBI-single to right. Two batters later, Pratt laid down a perfect, game-ending bunt.

“Pratt would give her right arm for this team,” Walton said. “But all of us would. We have a lot of heart and we always play for each other.”

NOTES: West second-baseman Allison Ennis suffered a left wrist injury while reaching for an errant throw in the top of the seventh. “They wanted to take her to the hospital, but she wanted to stay with us,” Greene said. “That’s how tough she is.” … The Falcons reached Jewell for four runs on eight hits in the last 3 1/3 innings. … Both teams play conference games on Tuesday. West plays at Statesville and Carson hosts South Iredell.