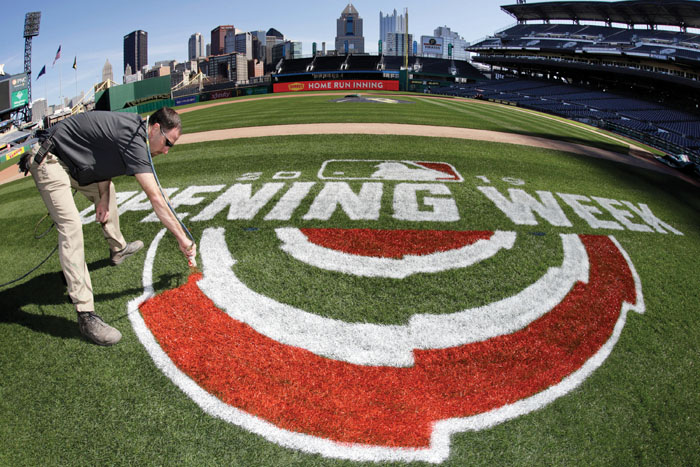 Andy Burnette, of the PNC Ground Crew paints, the Opening Week logo on the field at PNC Park Wednesday, March 27, 2019 in preparation for the Pittsburgh Pirates home-opener on Monday, April 1, against the St. Louis Cardinals. (AP Photo/Gene J. Puskar)

But beyond all the shifts, analytics and social media outreach, here’s the best way to tell Major League Baseball has zoomed into a new era: There’s not a single active player left from the 20th century.

Adrian Beltre and Bartolo Colon were the last, the Elias Sports Bureau said. And with all 30 teams set to play Thursday — from Bryce Harper’s home debut at Citizens Bank Park to Mookie Betts and the champion Boston Red Sox visiting Seattle — this year MLB becomes the first of the four major sports without someone still around who played in the 1900s.

The last time that was true in the big leagues? Back before even the World Series existed.

Already this season, the great Ichiro Suzuki has retired, done at 45 after two hitless games last week as the Seattle Mariners swept Oakland at the Toyko Dome.

But, as always, youth springs eternal. Vladimir Guerrero Jr., Fernando Tatis Jr. and Eloy Jimenez lead a strong rookie crop of boppers who might stick around for a while.

Will they be the next Mike Trout or Joe Mauer, or the future Manny Machado or Chase Utley? We’ll see over the years.

In the meantime, after a long winter of waiting, it’s time for everyone to play ball.

“Opening day, since I was a kid, I feel like it’s a celebration of our sport, so it’s something I always look forward to,” Yankees manager Aaron Boone said.

A look at the lineup going into Thursday:

Harper takes his first swings since signing a $330 million deal with the Phillies (that was a record until Trout got $426.5 million from the Angels soon after). Harper has five careetr home runs on opening day, tied with Albert Pujols and Ian Kinsler for most among active players, and will take on Julio Teheran and the NL East champion Braves. Harper is 18 for 50 (.450) with a personal-high eight homers against the Atlanta right-hander.

Machado starts up with San Diego, Paul Goldschmidt is with St. Louis, Robinson Cano got traded to the Mets, Nelson Cruz swings for Minnesota and the excitable Yasiel Puig is in Cincinnati.

Josh Donaldson joined the Braves and is expected to be in action this weekend — it’ll be Atlanta vs. Philadelphia in the first Sunday Night Baseball matchup on ESPN, with those games starting an hour earlier this season.

A year after a bunch of early snowouts and 54 total postponements — the most since 1989 — no blizzards are on the radar. It could be rainy in Kansas City and perhaps Oakland, but it’s supposed to be sunny at Dodger Stadium and several other sites. Also helping MLB get off to clean start: Toronto, Tampa Bay, Seattle, Milwaukee and Miami all open indoors.

Chris Sale, who struck out Machado to end the World Series and seal Boston’s fourth crown in 15 seasons, starts the opener for the 108-win Red Sox. Sale, Trout, Verlander, Goldschmidt and Rockies third baseman Nolan Arenado were among the stars whose teams locked them with rich, long-term deals.

But not every big name got a big contract — All-Star closer Craig Kimbrel and former Cy Young winner Dallas Keuchel were free agents all winter and went into opening day without jobs.

Angels two-way sensation Shohei Ohtani, the AL Rookie of the Year, won’t pitch this season while returning from Tommy John surgery but will hit. Yankees shortstop Didi Gregorius is expected back in midseason.

The Texas Rangers begin their 26th and final season at their current ballpark before moving across the street into a new stadium with a retractable roof. A tasty way to remember their last year is the Fowl Pole, a two-pound chicken tender that’s a new item on the concession stand menu in Arlington. … The Arizona Diamondbacks have converted their field from grass to artificial turf, joining Toronto and Tampa Bay as teams playing on synthetic surfaces. … The gaudy and gargantuan Home Run Sculpture at Marlins Park is gone. Well, just not inside the park anymore. It’s outside in a plaza.

Overall, MLB attendance has dropped for three straight seasons and last year the average fell below 30,000 for the first time since 2003.

“We’re a little down off where we were last year, but we’re optimistic that things are going to pick up,” Commissioner Rob Manfred said.

To help engage fans, MLB is providing players with video highlights they can post on their Twitter accounts.

A WORLD, AND A SERIES

After opening in Japan, MLB crosses the pond for the first time when the Yankees and Red Sox play twice at London’s Olympic Stadium in late June. There are two sets in Monterrey, Mexico — Cardinals-Reds in April and Astros-Angels in May. Also, there’s a Tigers-Royals matchup in Omaha, Nebraska, as part of the College World Series festivities in June, and a Cubs-Pirates game in Williamsport, Pennsylvania, in August to go along with the Little League World Series.

Harper has five career home runs on opening day, tied with Albert Pujols and Ian Kinsler for most among active players.

He’ll take on Julio Teheran and the NL East champion Braves — Harper is 18 for 50 (.450) with a personal-high eight homers against the Atlanta right-hander.

Here’s why Match Play is only once a year