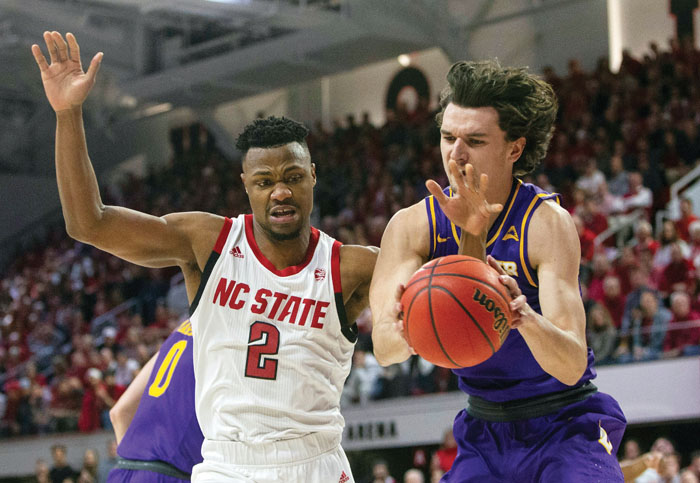 RALEIGH (AP) — Garrison Mathews had a career-high 44 points as Lipscomb narrowly defeated North Carolina State 94-93 in the quarterfinals of the NIT on Wednesday night.

Mathews set the program’s single-game scoring record in the Division I era and his points were the most by an opposing player at Reynolds Coliseum. He was 14 of 24 from the field, including 8 of 13 from 3-point range, and hit 8 of 11 free throws. He also had eight rebounds, three assists and two steals.

Markell Johnson dribbled down the left side of the lane and finished a contested layup with his right hand with 9.6 seconds left to give N.C. State a 93-92 lead. Cooper took the inbounds pass and nearly turned it over in the backcourt, but got into the lane to make a floater at 1.7.

Torin Dorn scored a career-high 34 points and had nine rebounds for the Wolfpack (24-12). Johnson added 19 points. C.J. Bryce had 10 points.

Lipscomb, a No. 5 seed, will play sixth-seeded Wichita State on Tuesday at Madison Square Garden. Texas and TCU take part in the other semifinal game.

AUSTIN, Texas (AP) — Dylan Osetkowski registered 15 points as Texas got past Colorado 68-55 in the NIT quarterfinals on Wednesday night.

Texas advanced to play No. 1 seed TCU on Tuesday at Madison Square Garden. Lipscomb and Wichita State will play in the other semifinal game.

Kerwin Roach II had 14 points and six rebounds for Texas (19-16). Courtney Ramey and Matt Coleman III each had 11 points for the hosts.

Texas went into the break with a 25-point lead over Colorado at 44-19, and led by double figures the rest of the way.

Tyler Bey had 18 points and 13 rebounds for the Buffaloes (23-13), which ended the season tied for the third-most wins in program history. McKinley Wright IV added 11 points and six rebounds. D’Shawn Schwartz had 11 points.

Elements of this were generated by Automated Insights, http://www.automatedinsights.com/ap, using data from STATS LLC, https://www.stats.com

Analysis: NASCAR did best it could in freshening schedule