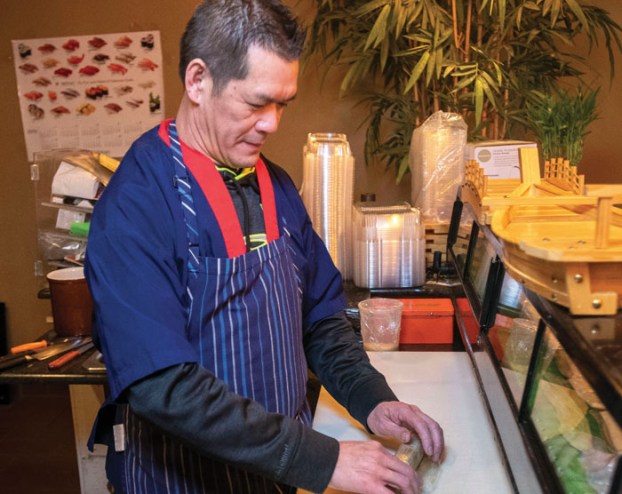 Ounheuane "Johnny" Phakasoum, from Laos, who works with his sister at Salisbury Thai Restaurant Bangkok Downtown recently became a US Citizen. Johnny at the sushi bar at the restaurant. Jon C. Lakey/Salisbury Post

Editor’s note: This is the last in a series of four articles featuring New Americans. The Rowan Literacy Council recently assisted four local immigrants in attaining their citizenship — a lengthy and critical process. The Post has featured one of these New Americans each Thursday in March.

SALISBURY — Surely the most recognizable thing about Ounheuane “Johnny” Phakasoum is his laugh.

Phakasoum, 50, is part owner of Bangkok Downtown and partners with his sister Teng Phomsaly. They’ve owned restaurants in just about every city and town surrounding Salisbury. They owned a restaurant on South Main Street. Now, they’ve sold them all and have one restaurant in downtown Salisbury. Phakasoum is the chef.

Phakasoum recently became a U.S. citizen with the help of the Rowan Literacy Council. Laurel Harry was his tutor for citizenship.

They became friends through the process and enjoy each other’s company.

Harry recalls that Phakasoum sent her a text message when he passed the citizenship exam.

“I called him and we were laughing, happy,” she recalled.

Born in the Laos, Phakasoum came to the U.S. in 1996 when his sister applied for his permit. There were significant political issues in their country. Phomsaly had come earlier to Sacramento and managed the paperwork for him to come.

He said Laotians must first stay in a settlement camp in Thailand. Many immigrants are given choices about what country they will go to, but Phakasoum says Laotians can only come to the U.S. He was at the camp for a year.

His sister had stayed at the camp for 10 years, so long that she set up a restaurant of sorts there that sold noodles and other foods.

The day Phakasoum arrived at the airport in Sacramento, he was picked up by an uncle who had emigrated to the U.S. when Phakasoum was a baby. Neither had any idea what the other looked like, and as Phakasoum looked through the sea of faces in the airport, he couldn’t see anyone who might be his uncle.

Finally, Phakasoum called out, “Naboa!” — which in Laos is “my mother’s brother.” They found each other.

By the time Phakasoum arrived in Sacramento, Phomsaly was in the process of moving to North Carolina. He was in California only two weeks before moving to Mooresville.

Phakasoum attended Mitchell Community College for three months, studying English. It was necessary, as he only knew, “yes,” and “no.” Phakasoum said the classes helped, and he learned how to get an ID as well as other vital bits of information.

Phakasoum’s sister told him that he would learn more English if he came home and started working. So he did.

Phakasoum can’t say enough about his sister, who is seven years older.

They’re from Vang Vieng, a town on the banks of the Nam Song River surrounded by limestone cliffs. Phakasoum has been in the U.S. for 22 years now. Last year was his first trip back to his hometown.

“It’s beautiful. I love my hometown. I go there, I go to the river. I buy food and eat with my uncle, aunt and nephew,” he said. “It makes my heart full when I go. I can’t eat the food anymore — it’s too spicy. I stick with papaya salad, bananas and milk.”

His mom and dad were good cooks, too. They cooked French and Vietnamese food. Phakasoum says all his family is into French cooking.

Phakasoum works seven days a week at the restaurant, 12 or 13 hours a day.

When he runs to the bank, tellers wonder why they suddenly smell garlic.

In his spare time, Phakasoum helps coach three soccer teams at Community Park. He prepares food, bringing it and cold, bottled water. When he arrives, the kids come running, yelling, “Chino is here!”

“When people eat, it makes me happy,” he says. “I eat only a little bit but I make a lot so I can give.”

Phakasoum said he had six months of training in Laos as a sports trainer and is often able to help injured players on the field. He understands how the tendons run; they can get twisted when players fall. As a result of that training, Phakasoum says he’d like to study chiropractic one day.

“I could help people,”  he said, pausing a moment to think. “But maybe I’m too old.”

He learned to speak Russian in school as a child. Today, he speaks five or more languages, including English, Lao, Thai, Russian, Vietnamese, Spanish and French. Many of the soccer players he coaches are Hispanic and, he said, it helps to be able to speak Spanish with them.

There’s one Hispanic employee at the restaurant, as well.

Johnny says there’s intentionally no manager at Bangkok Downtown. He prefers to treat everyone like family and try to hire people who will understand their jobs and do what they’re supposed to without being told.

If someone forgets to dress appropriately, he says, that person will work in the kitchen for the day, but no one scolds anyone else.

Rowan Literacy Council assists people in the area with learning to read, learning English as a second language, attaining American citizenship, and more. The council is a United Way agency. If you need their services or you’d like to volunteer, call 704-216-8266.

Hard work, loving Jesus some of the secrets behind Hilda Eller’s 100 years

SALISBURY — Hilda Wood Eller has crammed a lot of interesting things into her 100 years on earth. She had... read more