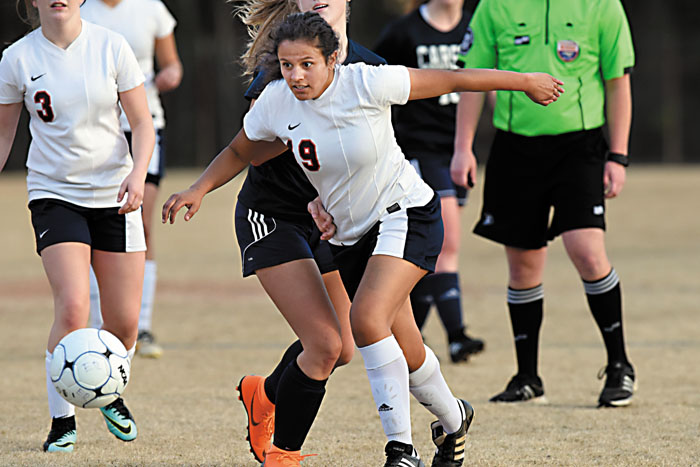 Wayne Hinshaw file photo/for the Salisbury Post ... East Rowan’s Jackie Lynn Lowry (19), center, is a senior captain this season for the Mustangs. She is shown in a game against Carson last year.

Next match: At Carson, Thursday

GRANITE QUARRY —  When he talks about the process and developing a winning culture, East Rowan’s first-year girls soccer coach Nermin Hodzic sounds a lot like a football coach who has been hired to turn a program around.

There’s a reason for that. A 2011 West Rowan graduate, Hodzic was a student and soccer player in Mount Ulla during the glory days of Falcon football, a time when West won three state titles and owned the longest winning streak of any team in the nation. The inspiration for a lot of Hodzic’s team-building philosophy comes directly from watching the late Scott Young do his thing.

“Players were held accountable for their actions and Coach Young’s team developed an amazing work ethic,” Hodzic said. “It ‘s all about developing winning habits. Coach Young’s teams practiced unbelievably hard. They competed so hard in practice, and then you saw what happened on Friday nights.”

Hodzic is trying to boost a program saturated with players who are young and inexperienced. Even the casual soccer fans in the county can name some of the girls who play for Salisbury, Carson, South Rowan or West Rowan. But only the true soccer junkies could name any of the Mustangs.

“The most important thing for us this year is for our players to learn a new system and to believe in the process,” Hodzic said. “We’re building mostly with freshmen and sophomores, so it’s not going to happen this week or next week  — and it’s probably not going to happen this year. But I firmly believe that it will happen. We just have to stick with it and keep developing our individual skills. We have to compete in practice as hard as we can. As we do those things, our team gets better.”

Jessie Jones, a defender last season, has moved to forward. The senior captain may emerge as East’s top scoring threat. She has two goals and two assists so far.

“She’s one heck of an athlete,” Hodzic said.

Wilhelm, Haven Joyce and Alix Vazquez give East three freshman starters, a trio of building blocks for the future.

Mary Spry, the tall freshman basketball standout, was a potential goalkeeper, but she’s out with an injury. Sophomore Lydia Miller, who also was on the basketball team, has stepped into the keeper role and has performed admirably.

“She’s been a saving grace for us,” Hodzic said. “She’s coming on.”

So far, Miller is making about nine saves per game. East is giving up about four goals per game.

“We started the season with a brutal schedule, games with North Davidson, Salisbury and West Davidson that we really didn’t have a chance in,” Hodzic said. “But there were another three or four games where we were right there and could have won, but we didn’t finish well. That’s the toughest part. Winning the close ones requires a certain mentality, and we’re still a work in progress in that area.”

Hodzic’s own life story is inspirational. A child refugee from Bosnia in the late 1990s, he continued his education after West Rowan at UNC Charlotte. He’s employed as a teaching assistant at East and works with exceptional children.

So is coaching soccer at a school where club players are rare, but Hodzic is sinking his teeth into the task.

“Stay with the process and eventually we’ll get the outcomes we want,” Hodzic said. “You can’t jump ahead to outcomes. First, there’s the process.”

Woods beats Wise, 3-and-1, despite shaky round