Hard work, loving Jesus some of the secrets behind Hilda Eller’s 100 years 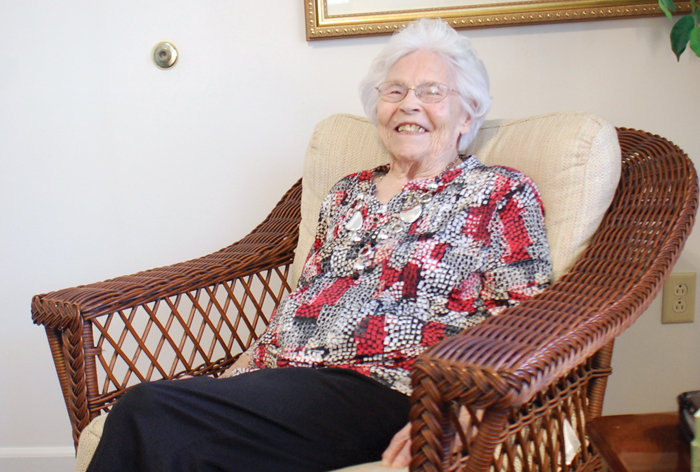 SALISBURY — Hilda Wood Eller has crammed a lot of interesting things into her 100 years on earth.

She had seven children, so that was interesting enough. The last two children, a girl and boy named Lynn and Gynn, were twins. If you ask Hilda why she stopped having children, she always has her answer ready.

“Because they started coming two at a time,” she says.

Hilda didn’t learn to drive a car until she was in her 50s; daughter Lynn Masingo helped with her instruction. She also learned to play bridge later in life and loves to watch golf on television, though she has never played a round herself.

She passionately follows NASCAR racing and the University of  North Carolina Tar Heels basketball team. Coach Roy Williams sent her personal letters on both her 90th and now her 100th birthday, which is today.

Hilda has traveled the world, thanks to knowing the value of a dollar. After her divorce, she managed to buy a house and pay cash for new cars, just through her sheer frugalness.

And some years back, she breezed through two knee replacements.

“The doctors are amazed at her good health,” Lynn says. “Physically, she gets around very well.”

And that leads to another interesting thing about Hilda Eller. Her mother, Emma Wood, happened to live for 105 years — actually, just a couple of months shy of 106.

Her aunt Jenny Bell Nash lived to be almost 101.

Ask Hilda and she credits being active, working hard, staying away from cigarettes and booze, and loving Jesus as ingredients in a long life such as hers.

“There’s got to be something in the genes, too,” Gynn Eller says.

Many of those family members and friends will be part of the big crowd gathering Saturday afternoon for her 100th birthday celebration at Stallings Memorial Baptist Church’s fellowship hall.

She used to love listening to the late Rev. Billy Graham preach, and her children say they often catch her with her eyes closed, whispering prayers in her room.

When her kids were growing up, she sat on the edge of their beds to listen to their nighttime prayers. Going to church on Sundays was a given.

At the Carillon assisted living facility, where she has lived since August, Hilda looks forward to the regular bingo contests. “She lives for bingo,” daughter Gladys Harriss says.

Gladys, Lynn and Gynn were among their mother’s visitors Wednesday morning at Carillon. For about five years previously, Hilda had lived at Brookdale, and Lynn recalls it was Hilda’s idea, not her children’s, that they sell her car and she go to a nursing home after having lived with the Masingos for 10 years. 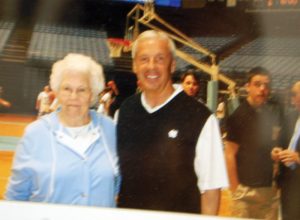 Hilda Eller treasures this photograph she has with University of North Carolina basketball coach Roy Williams.

Hilda always has had her opinions. In college basketball, she likes Roy Williams, but Duke Coach Mike Krzyzewski — not so much. In golf, she favors Phil Mickelson and is not a Tiger Woods fan. In NASCAR, give her Tony Stewart, but she wants nothing to do with Kyle Busch.

Gynn, who lives in the Lake Norman area, was once neighbors with Stewart, and he still plans to make a meeting between Stewart and his mother happen. When Hilda heard of this possibility, she asked, “Isn’t he single? He’s not going to ask me out, is he?”

It’s hard to believe, but since Hilda birth’s just after the end of World War I, she has seen 17 different presidents.

“Most of the changes we have seen in the world have happened in her lifetime,” Lynn says.

Hearing this, Hilda adds, “I know I’ve seen a lot of them.” 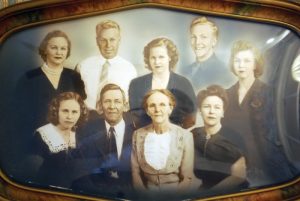 This family photo shows Hilda Eller’s parents, Jim and Emma Wood, center, surrounded by their seven children. Hilda, who turns 100 today, is directly behind her mother. She is the only one of the Wood children who is still alive. Her siblings included Roberta and Willie Lee in the front and Hazel, R.J., D.B. and Evelyn in the back.

Hilda Wood Eller grew up in the Dunn Town section of Rowan County off Woodleaf Road. Her parents, Jim and Emma Wood, had five daughters and two sons just as she would years later.

Everyone worked on the family farm, picking and hoeing cotton, worming tobacco, milking cows, tending the garden and collecting eggs. She attended 1o grades at Woodleaf School and is the only surviving member of her class.

She married Russell Lee Eller and worked as a homemaker for many years as they raised their big family, which included Barbara Williams, Carolyn Smith, Gladys Harriss, Frances Grim, Wayne Eller, Lynn Mosingo and Gynn Eller.

(Barbara and Carolyn have passed away.)

Hilda gardened, canned and made her family three big meals a day — Lynn says they were “a meat-and-potatoes family” — and Hilda became known for her cakes, cobblers and biscuits.

But there’s a sad story about the biscuits.

Hilda quit making them for good when Lynn and Gynn came home from school one day and grabbed some pieces of Merita white bread instead of her biscuits.

Once the twins were in junior high, Hilda began working at the Fiber plant, and in her 50s, she was taking on a lot of swing shifts and double shifts to earn money.

“She invested wisely and spent frugally,” Gynn says of his mother’s financial prowess.

Gladys says the Fiber plant experienced some layoffs during one period, and her mother offered to be one of the casualties, though her seniority would have saved her job. “She felt that young families needed a job more than she did,” Gladys says.

With sister Hazel doing much of the planning, Hilda also traveled around the continental United States and to places such as Europe, Egypt, England, Australia, New Zealand, Israel, the Virgin Islands and Hawaii.

Once she took her five surviving children and their spouses on a vacation to Alaska. She has enjoyed a Mediterranean cruise, and she saw a taping of “Wheel of Fortune” in New York but did not meet Pat or Vanna.

The children, her pastor and a church deacon visit her often, and the children like to kid her as to whether they are her favorite.

Gynn says he’s going to be putting in a swimming pool at his home this summer.

“I told her to get ready for bikini weather,” he says.

First, Hilda has some basketball to watch.