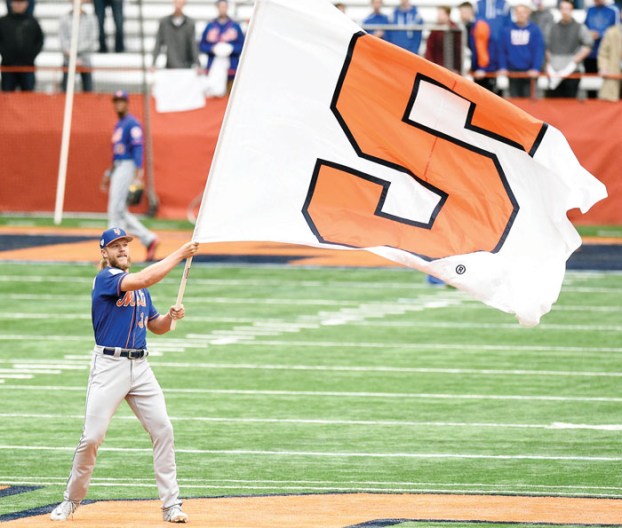 SYRACUSE, N.Y. (AP) — The New York Mets went inside Syracuse University’s Carrier Dome for the final tuneup of spring, and more than 4,000 fans made the moment special.

“It was awesome. Just to see how many people came out,” second-year Mets manager Mickey Callaway said Tuesday. “It was a great feeling. They filled this with a lot of energy and we felt it.”

The open workout attracted 4,296 fans and marked the first time the Carrier Dome played host to baseball since it  opened in 1980. Batting cages were lined up along the sideline of the football field where the Syracuse Orange play their home games. There was no batting practice but lots of pitching practice, some infield and base-running drills, and a lot of interaction with the fans.

“It was great,” outfielder Brandon Nimmo said. “We had a great time out there, I felt like the fans were really into it and guys were throwing balls out into the stands. It was definitely a different feeling than I’ve ever been a part of. I started to get a little bit of that football mentality back, so I had to tone that down a little bit.”

When he wasn’t signing autographs, ace right-hander Noah Syndergaard was throwing off a constructed mound. Syndergaard, who initially complained about having to make the trip north, made a lasting impression when he ran around the field waving a big Syracuse University flag.

“Noah knows we’re always here for the fans’ sake, and that’s one thing about Noah — he’s always going to be there for the fans,” Callaway said. “He got a lot of conditioning in running that flag around today.”

Reigning Cy Young Award winner Jacob deGrom did not make the trip. He was in New York getting a physical for a new five-year contract.

The Mets replaced the Washington Nationals as the Triple-A franchise in town. Opening day for the Syracuse Mets is next week.

“We have talked all season about a new attitude New York City should have, and now we can share that attitude in Syracuse,” Mets general manager Brodie Van Wagenen. “We will be champions. We’re going to win and we’re going to win in the future.”

Newcomb tunes up for season as Braves win

ATLANTA (AP) — Sean Newcomb still thinks of himself as a young pitcher. Some of his new Braves teammates see... read more