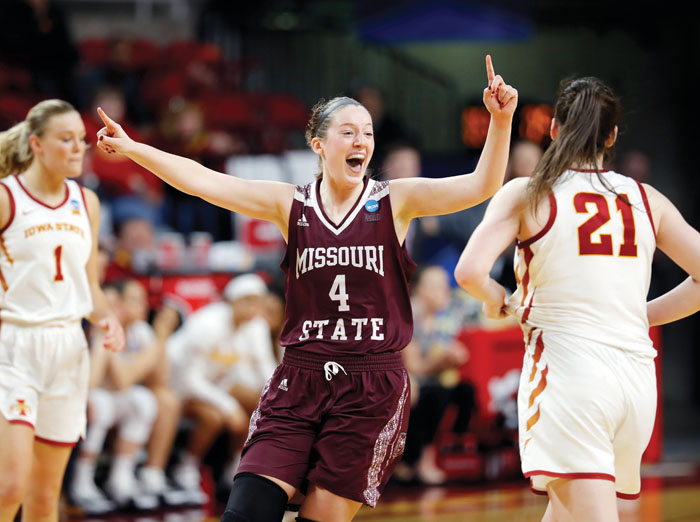 NEW YORK (AP) — The Sweet 16 is set and Missouri State is crashing the party for the first time in 18 years.

The 11th-seeded Lady Bears last made it this far in 2001 behind now-assistant coach Jackie Stiles during the team’s historic Final Four run. They are the only double-digit seed to reach the regional semifinals after knocking off Iowa State on the Cyclones’ home court. It’s the ninth time in 10 years that a team seeded 10 or lower has reached the Sweet 16.

“Wow. That was amazing,” said Missouri State coach Kellie Harper, who won three national championships as a point guard under Pat Summitt at Tennessee. “We did it our way. This is a dream come true.”

While Notre Dame and Baylor cruised to easy victories, Missouri State wasn’t the only lower seed to advance. Six seeds UCLA and South Dakota State also pulled off surprising wins, beating Maryland and Syracuse, respectively, on their home courts. It’s the first trip to the Sweet 16 ever for the Jackrabbits.

“It’s a great, great, great day to be a Jackrabbit,” said South Dakota State coach Aaron Johnston, who suffered a fat lip in the postgame celebration.

Next up, UCLA will try to do something the school has never done — beat UConn. The Huskies have won all five meetings, including a 15-point win in the Sweet 16 in 2017. The Huskies won at UCLA by 18 points last year.

The Pac-12 had five of its six teams advance to the round of 16 — the most of any conference. Oregon State will join UCLA in Albany, New York. Oregon and Arizona State advance to play in Portland, Oregon, on Sunday. Stanford rallied to beat BYU and reach the Chicago Regional.

“For five teams to be in the Sweet 16 is a great statement about our league,” Stanford coach Tara VanDerveer said. “Congrats to UCLA and Oregon State. That’s awesome.”

It’s the second time in three years that the Pac-12 has had five teams in the Sweet 16. The SEC and ACC each have three teams, with the Big 12, Big Ten, American, Missouri Valley and Summit all having one team.

Three of the finalists for the Lisa Leslie Award, given to the best center in the country, are still playing. Baylor’s Kalani Brown, Mississippi State’s Teaira McCowan and Iowa’s Megan Gustafson are still around. If the Lady Bears and the Hawkeyes win their next games, Brown and Gustafson will square off. McCowan could potentially face off with either one if two of the teams reach the Final Four.

Fans turned out, with no better place than Iowa’s Carver-Hawkeye Arena. The two-day total of 23,096 in Iowa City set a record for combined first- and second-round attendance, topping South Carolina (21,129 in 2015). They showed up to watch the Hawkeyes and Gustafson, the women’s Division I leading scorer this season.

In 2015, the top 16 seeds were rewarded by hosting the first two rounds of the NCAA Tournament with “the hope that the move would create a better in-arena atmosphere” and “improve attendance,” said Rhonda Lundin Bennett, chair of the Division I Women’s Basketball Committee.

ATLANTA (AP) — MaChelle Joseph was fired Tuesday after nearly 16 seasons as the women’s basketball coach at Georgia Tech, with the two sides giving strikingly different reasons for her dismissal.

The school, which suspended Joseph late in the season for what it would only describe as a personnel matter, said it was left with no choice after an independent investigation into alleged mistreatment of players and staff, as well as possible NCAA violations.

Joseph’s attorney reiterated that her client was being punished for complaining about gender equity issues at the Atlantic Coast Conference school, which is already facing NCAA allegations of wrongdoing in its men’s basketball program as well as mourning the unexpected death of a football player this past weekend.

The Yellow Jackets women’s team closed the season on a four-game losing streak, three of those defeats coming after Joseph was placed on leave Feb. 27. Two of Georgia Tech’s top four scorers quit the team at the same time.

The 49-year-old Joseph was the winningest coach in school history with a record of 311-198. She guided her team to seven NCAA Tournament appearances, the last coming in 2014.

Georgia Tech said it hired the labor law firm of Littler Mendelson on Feb. 25 after players came forward with concerns about Joseph’s treatment of player and staff. According to a school statement, the firm interviewed 40 people including Joseph, her assistant coaches, all 13 members of the team, administrators and support staff, as well as parents of the athletes.

Littler Mendelson’s report, which was submitted to the school last week, found that every player reported “concerns regarding alleged emotional or mental mistreatment” by Joseph, and that they described the environment around the team as “toxic” and “hostile,” according to Georgia Tech. It also described Joseph’s conduct as “bullying” and “emotionally, mentally and verbally ‘abusive.’”

In addition, several players made allegations that would be violations of NCAA rules, the school said. Georgia Tech has reported the allegations to the NCAA.

“That allegation is false and was expressly refuted by officials close to the team and outside experts,” the attorney said.

“Coach Joseph is tough but fair.”

Banks added that Joseph has “received countless messages from former and current players, parents, and staff expressing their love, admiration, and respect. These messages reveal the truth and will be her legacy.”

A glaring disparity between the men’s and women’s program was the main issue, according to Banks.

“For years, Georgia Tech has provided sub-standard resources to its women’s basketball program including in facilities, marketing, travel, and funding,” Banks said. “She has been accused of ‘attacking’ Georgia Tech through her efforts, and top athletic department officials vowed to ‘get rid’ of her. Georgia Tech finally accomplished that goal by manufacturing allegations against her and manipulating an investigation to make it appear that she engaged in unacceptable coaching practices.”

Georgia Tech said Joseph was given the opportunity to respond to the report, which she did on Monday. Athletic director Todd Stansbury met with the suspended coach on Tuesday to inform her that she was fired.

“The findings outlined in the report have left us no choice,” Stansbury said. “I am disappointed and saddened to learn that the well-being of our student-athletes was being compromised.”

The case is likely to spur additional legal action.

“Coach Joseph will not be silenced,” Banks vowed. “She will continue to fight for equality in women’s athletics and for justice related to the discrimination and retaliation she has suffered at the hands of the Georgia Tech athletic department.”

Assistant coach Mark Simons served as acting head coach after Joseph was suspended. Georgia Tech finished the season 17-13, including a 7-9 mark in the ACC.

“I will be forever grateful for all of the young women who took a chance on Tech and on me,” Joseph said in a statement issued by her attorney. “They have forever changed this program and my life.”

Joseph, who played at Purdue, joined the Georgia Tech staff in 2001. After two years as an assistant, she took over as head coach when Agnus Berenato moved to Pittsburgh.

Beginning in 2007, Georgia Tech made six straight appearances in the NCAA Tournament. Its best season came in 2011-12, when the Yellow Jackets finished 26-9 overall, 12-4 in the ACC and reached the Sweet 16.

Though this year’s team failed to receive a postseason bid, Joseph insisted the future was bright for a program that claimed two of the last three ACC freshman of the year awards, including this year’s winner, Elizabeth Balogun.

After Georgia Tech’s season ended with a loss to North Carolina in the ACC tournament, Simons praised Joseph.

“She put this team together. She recruited this team,” he said. “She’s my friend. She’s my boss and the reason I came to Tech.”

Georgia Tech began the search for a new coach less than 24 hours after a memorial service for football lineman Brandon Adams, who died suddenly this past weekend at age 21. Also, the school announced March 15 that the NCAA found major recruiting violations in the men’s program involving a former assistant coach and an ex-friend of head coach Josh Pastner.