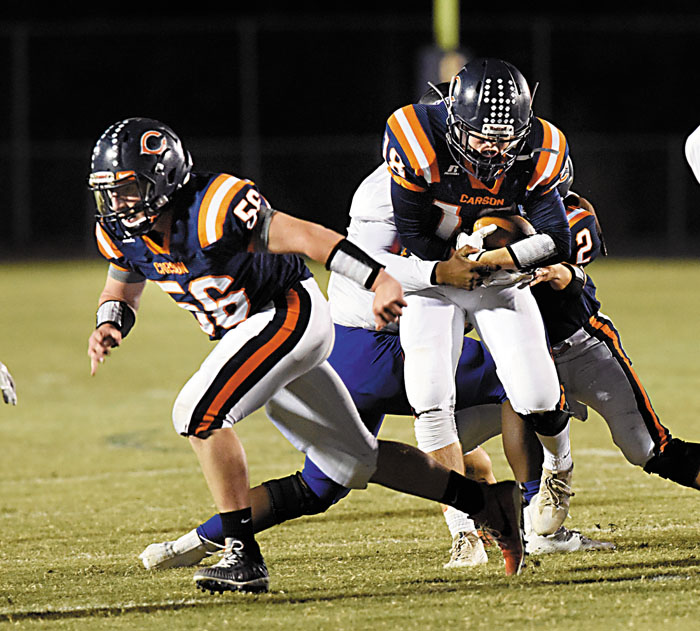 Wayne Hinshaw file photo/for the Salisbury Post ... Carson’s Andrew Bradshaw (56), left, looks to block for Ben Coulter (18), who just made a catch, during a game last season. Bradshaw recently announced that he will continue his education and football career at Carson-Newman.

But Bradshaw, grandson of Catawba and Salisbury-Rowan Hall of Famer Reid Bradshaw and son of Catawba graduate Trent Bradshaw, is headed to Jefferson City, Tenn., to join one of Catawba’s biggest rivals in the South Atlantic Conference.

“Our family does have a whole lot of ties to Catawba,” Andrew said with a chuckle. “I’ve been hearing it every day,”

He’ll probably keep hearing it every day for the next four or five years, but the first rule of being recruited is to go where you’re shown the most love.

“I sent out emails to every school in the SAC,” Bradshaw said. “Carson-Newman was the one that responded and recruited me. Head coach Mike Turner and special teams coach Antonio Goss were unbelievable.”

“But mostly, I just loved the school,” Bradshaw said. “And I liked that everything in the football program starts with family.”

A lot of people went to bat for Bradshaw when it came to reaching out to colleges, including Steve Beaver, a former athlete, coach and administrator at South Rowan and Tom Harper, who has coached at a lot of places, including Catawba. Those two have a lot of contacts.

Bradshaw, who weighs 215 pounds, was a versatile offensive lineman for the Carson Cougars. He not only learned all five offensive line positions, there were Fridays when he played all five in the same game. He made the All-North Piedmont Conference team last fall, but it was the art of long snapping at which he excelled most. He was the All-Rowan County first team long snapper the past two seasons.

He was mostly interested in baseball and basketball early in his athletic career, but as a middle schooler, his father pulled him away from shooting driveway hoops one day and introduced him to long snapping. By the time he was in high school, Bradshaw realized his best chance to play a sport in college was to master long snapping.

He worked hard at it. He’s taken lessons from Tyler Griffiths, considered one of the nation’s top collegiate long snappers during his career at N.C. State.

Long snapping is not a routine job. Imagine getting in an odd stance and throwing a pass between your legs.
It’s also a thankless job. You’re like an umpire. No one notices you at all — until you mess up.
Bradshaw has been doing it long enough that he’s learned the tricks of the trade. He keeps an even keel.

“The biggest thing I’ve learned as a long snapper is that while it’s important to get down the field fast, that’s always going to be only the second or third most important thing,” Bradshaw said. “The snap has to take priority. If you don’t execute a good snap, getting down the field won’t matter.”

Former Carson head coach Joe Pinyan said of Bradshaw last August: “He’s a student of the game and he understands the game. That’s something he’s had handed down to him.”

Bradshaw plans to major in education. It’s not a shock that he aspires to be a teacher and coach. His grandfather was one of the best football coaches in county history during his 12 seasons at South Rowan and also coached five straight South baseball teams to winning seasons.