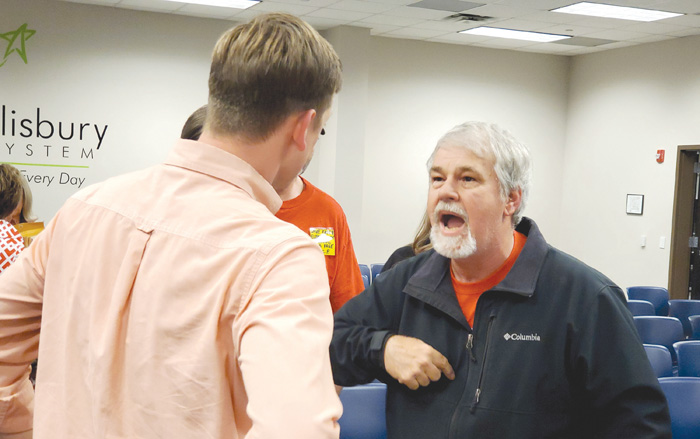 Faith Alderman Randall Barger, an opponent to the town's elementary school closure, speaks to former school board Chairman Josh Wagner in March 2019 following a meeting in which the board scheduled public hearings for the closure of Faith and Enochville elementary schools. Salisbury Post file photo

SALISBURY — The closures of Faith and Enochville elementary schools moved one step closer to a final vote Monday when the Rowan-Salisbury Board of Education scheduled public hearings for April 1 and April 8, respectively.

Those votes occurred in front of a vocal crowd that was largely opposed to school closures and after about 30 people spoke. People filled the school board’s meeting room and, at one point, numbered about 75 in an overflow room. Some were in opposition to closing Koontz and/or Enochville schools. Others spoke in support of Koontz Elementary, describing the challenging situation students enrolled there face.

And while Superintendent Lynn Moody spoke Monday about the benefits of making a quick closure decision rather than a one-year delay, something requested by many parents, the school board has not approved a specific closure date.

Board members framed Monday’s votes as being necessary in the face of mounting capital needs, empty seats and a failure to make decisions previously.

Wagner, who introduced a plan two weeks ago that included closures, said the current effort is primarily about the estimated 2,500 empty seats in the school system.

“If this situation came up in your personal life, you would never do what you’re asking us to do. You never would,” Wagner said. “You would take the path that you had to take financially, but what you’re saying here is, ‘That doesn’t matter. I don’t care what I would do. I want to take the county taxpayers’ dollars, and I want to use it for my benefit.’”

It’s not possible to only redistrict because there are fewer students than seats in the school district, Wagner said. And redistricting would affect many more parents and students than the current plan, he said.

“I promise you, when we redistrict, we will have more folks than are sitting in this room here tonight back here because they won’t want to go to the school we are moving them too,” Wagner said. “It will be unfair. It will be inequitable. It will be all of these things. And yet again, the merry-go-round continues to spin.”

“The school system is in a predicament where it has to do something,” board bember Dean Hunter said. “We can no longer do nothing.”

Board member Travis Allen echoed statements made by Hunter and Wagner, adding that “this is the start of much more that this board needs to do.”

As proposed, all of Faith’s students would move to Koontz. Students who currently attend Koontz would be divided among nearby schools. A draft assignment plan provided to the school board Monday shows 99 Koontz students transferring to Hanford Dole Elementary, 42 to Granite Quarry Elementary, 18 to Overton Elementary and 188 staying at Koontz.

The draft plan also moves students around between schools not previously discussed in the most recent plan. One significant shift, for example, shows 101 Isenberg Elementary students moving to Hurley Elementary and 12 others moving to Overton.

Board member Alisha Byrd-Clark said she agrees that something must be done, but added that she had struggled for several days leading up to Monday’s meeting about what to do.

“When I cast my vote, it’s solely based on my integrity and our children,” she said.

That draft redistricting plan was contained in two binders of closure-related information provided to school board members on Monday. Neither binder included a staff recommendation to close one or both schools this year. However, both included the statement that closure of the schools could be accomplished “without a negative impact on the educational outcomes of the students who attend school there” and a timeline stating that distribution of surveys to affected staff will begin today to gather school relocation preferences.

Travel times for students at the schools set for closure could increase.

Asked by a school board member, Moody said that the “aggressive” timeline associated with closing schools this year is in the best interest of both schools. As an example, Moody said staff at North Rowan High School began applying for other jobs when the possibility of its closure arose last year.

It’s difficult to maintain and recruit staff to a school when it’s “in flux,” Moody said.

Wagner has also expressed support for closure of both schools this year.

If closure occurs this year, staff surveys stating a workplace preference would be due on April 1. Staff would be notified of their placement on April 30.

No jobs are expected to be lost in the shuffle. Placement will be determined by the surveys and attrition.

But Allen raised questions about whether staff members who wish to stay at Koontz might be moved unwillingly as Faith students and teachers move in. Documents presented Monday state that seniority will be used when a teacher’s top choices cannot be accommodated. And core teachers, for example, will be moved from Faith to Koontz.

“If I was a teacher at Koontz, and I didn’t want to leave, yet a teacher from Faith had more experience and more tenure, I would be moved. That’s the problem,” Allen said. “While I like the idea, if Faith has to be closed, of bringing all their teachers and all their students with them, I just want to make sure we’re equitable with the staff at Koontz as well.”

Responding to questions and statements by Allen, Moody said there may be cases where “core teachers” at Koontz are moved with their students to other schools in the district.

Public comments were a large part of Monday’s meeting, with speakers voicing opposition for reasons that ranged from questions about paving parking lots to the fact that Rowan-Salisbury Schools would be closing one of its highest-performing elementary schools. A majority of the commenters supported keeping Faith open.

The closure is in direct opposition to the Rowan-Salisbury Schools’ strategic plan, one speaker said.

There’s simply not enough pavement at Faith Elementary to justify a several-thousand-dollar estimate that’s being used by Rowan-Salisbury Schools, said another.

Students in Faith don’t deserve to be moved to a low-performing school, a third parent said.

Why was the three-tier plan presented last year put together at all if the school board planned to abandon it? asked a fourth.

Faith would get a new community school in the shuffle; only, it wouldn’t be in the Faith area, said Daisy Bost. And Koontz Elementary is “failing as we speak,” Bost said. Bost and other parents asked why the school system and state education system hadn’t done something to help the children at Koontz.

But the repeated criticism of Koontz as a low-performing school prompted a rebuttal from teachers and an administrator in the school system.

Koontz Principal Lori Marrero said that the “F” rating that Koontz receives does not reflect the real situation at the school, where many students don’t have the same opportunities others have. Students at Koontz may face issues such as poverty that prevent them from being fully engaged in their education, she said.

“Growth for us is the gold standard,” Marrero said.

“When hearing the children at Koontz Elementary referred to as ‘those children,’ as if they are disposable goods, really bothers me,” she said. “Regardless of their current station in life, just like the children at Faith Elementary, they, too, have potential to be great, as well as future leaders of the world.”

Meanwhile, multiple people who spoke about Enochville said they had not received enough notice about the possibility of their school closing.

Robin Barham, from the Enochville area, said a previous plan, in which a combined elementary school would be built, made sense if Enochville must be closed, but that she was opposed to splitting students up. She encouraged school board members not to make a quick decision to close the school.

“I don’t even know where my child could go,” Barham said.

Lois McCorkle, also from the Enochville area, asked how the school system could close the community’s school when for years it’s served as a voting location for the West Enochville precinct.

Following Monday’s meeting, Wagner said there are many decisions left to be made, including the specific date of closure.

He said the coming public hearings will only involve the presentation of data provided to school board members on Monday, including redistricting maps, and receiving additional public comment. When asked, Wagner said the school board could still choose to wait a year before closing one or both schools. However, the school system must hold a public hearing before a vote to close.

County Commissioner Mike Caskey, who was in the audience Monday and previously served on the school board, was noncommittal when asked whether he supported closing Faith and Enochville. However, Caskey said he would support spending money to build a new, combined eastern Rowan County elementary school and another for Landis and Enochville students.

Editor’s note: Following publication of this story, Robin Barham clarified that she was referring to a previous plan when she said that she was OK with consolidation if it must occur.

Donated treasures will be available at Rowan Museum’s ‘Upscale…