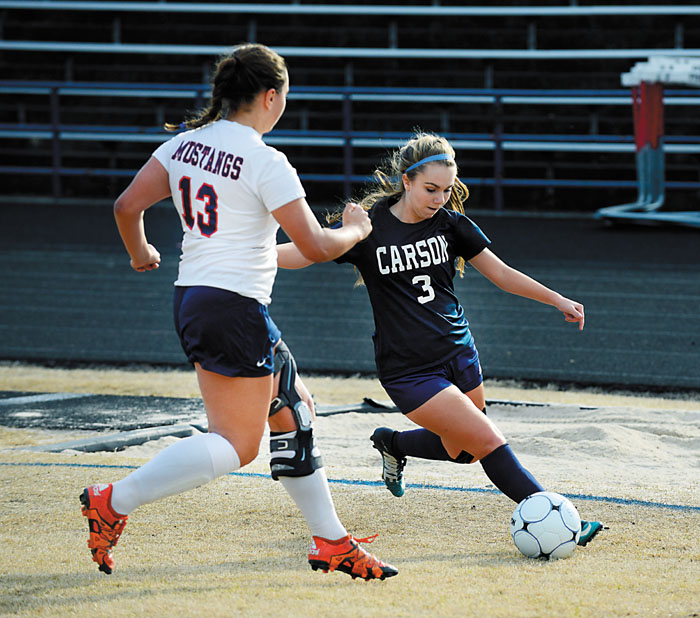 Playoffs: Lost 1st round 3A to A.C. Reynolds

Next match: Tonight vs. North Iredell

CHINA GROVE — With two-all county players back and bolstered by impactful newcomers, Carson has a chance for a breakthrough season in girls soccer.

Carson hasn’t won a playoff match since 2014, but there’s a chance the Cougars can do something about that. Carson also hopes to contend for the North Piedmont Conference championship. South Iredell ran the table in the league last season, with Carson and North Iredell tying for second place.

“We hope we can contend for the conference,” Carson coach Lauren West said. “If we work our hardest and if we play our best, this team can potentially accomplish a lot of things. We’ve got a nice mix with some year-round soccer club players, plus some girls who are special athletes and do a lot of sports.”

West is a former North Rowan player. She was educated at Louisburg, Catawba and UNC Wilmington. A psychology major, she owns a master’s degree and is part of the social studies department at Carson. She coached at North Rowan with some success before coming to Carson. This is her fifth year guiding the Cougars.

She has some nice depth. Her biggest challenge is getting everyone in the right spot for the optimal team performance. Many Carson players are listed as midfielders/forwards because she’s been seeking the best combination.

“We do have talent,” West said. “We’ve got more than 11 good players. I guess that’s a problem, but that’s not a bad problem to have.”

Carson should be tough to game-plan for because the Cougars probably won’t rely on a dominant striker. Nine different Cougars have scored in the non-conference games.

“I think that’s a very positive thing,” West said. “Our teamwork has been good. Our goals are going to come from a committee.”

All-county Gracie Thomason had a team-high 25 goals and 13 assists last season and will score her share again. The junior has three so far.

“She’s a talented player and she’s being looked at by a lot of colleges,” West said.

Carson graduated significant scoring punch in Hannah Smith and Sarah Musselwhite. They combined for 36 goals. The Cougars have replaced them with freshman Hannah Isley and junior Sydney Borst, who spent her sophomore season developing on the jayvees. Isley has scored 10 goals in the early going, while Borst has six, including a hat trick in a 5-4 win against Central Cabarrus.

The other proven scorer returning for Carson is sophomore Lani Isley, who accounted for 13 goals as an all-county freshman. Isley is one of the county’s better young athletes and has been an important performer for the Cougars in basketball, cross country and track and field.

There are three Isley sisters on the Carson varsity. Lani is the oldest. Hannah and Riley, who has two goals, are freshman twins.

Continuing with the sister acts, there are a couple of Conrads. Taylor, a junior, is a familiar name to Rowan sports fans, as she’s a standout in cross country and a key player on the basketball team. Lindsey, a sophomore, is an all-county tennis player. The Conrads will mostly be involved in goal prevention, but Lindsey already has four assists this season.

“The Conrads give 100-percent effort at all times,” West said. “They’re best friends as well as sisters, so it’s fun to see them working side-by-side on the soccer field.”

Carson is young. The sophomore and freshmen classes are strong.

There are only four seniors. Two are starters. Sarah Christy and Olivia Weatherby are defensive anchors. They are heady, experienced, four-year players.

“A lot of our offense starts with what those two do for us on defense,” West said. “We build our team from the back, and they are very solid.”

Carson has a new goalkeeper in junior ZaReah Smith. She’s backed up by senior Reagan Taylor.

Other girls who have scored for the Cougars this season are juniors Kayla DeNicholas and Kate Carter and sophomores Emelyn Soto and Estefani Perez-Vega.

Carson was 6-0 in the county last season and has won its last 10 county games.

While Carson has lost three times in the early going this year, the Cougars have played well with the exception of the first half against undefeated Northwest Cabarrus. They did a much better job of slowing down the Trojans in the second half.

“We’ve had a little bit of a slow start with a lot of muscle pulls and several girls joining us late because of the basketball run,” West said. “We’ve also been on the road for most of our games so far, including some we had to move because of field conditions.”

Carson offered a glimpse of what it’s capable of in last Friday’s 9-0 win against South Rowan.