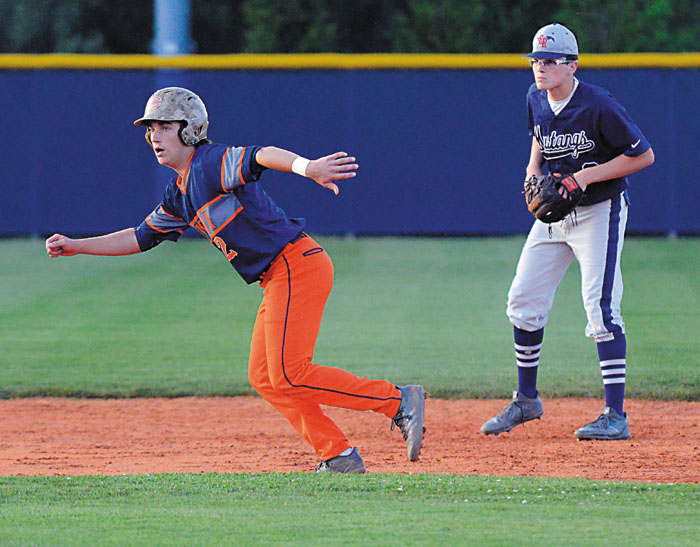 Wayne Hinshaw FILE PHOTO/for the Salisbury Post ... Carson’s Cole Hales leads off second base during a game against East Rowan last season. Hales hit a big triple on Tuesday night and pitched a complete-game, two-hitter as the Cougars edged the Mustangs, 2-1. East's Bryson Wagner looks on.

CHINA GROVE — Carson senior pitcher Cole Hales knew he’d have to be outstanding for his team to win on Tuesday.

East Rowan was visiting and East sophomore Jake Hunter, who has been incredible so far, was providing the mound opposition.

“Jake has pitched great this year and he was really good again tonight.” Hales said. “I knew it probably would be a pitching duel. I knew I couldn’t allow much.”

Hales, a Coker signee who is being counted on heavily on the mound for the first time by Carson coach Chris Cauble, almost didn’t give up anything in a 2-1 North Piedmont Conference victory.

East slugger Wayne Mize led off the seventh. Hales got ahead of him with a curveball, but when he tried another curve, Mize wasn’t fooled. He smoked it.

Needing one big out, Cauble visited the mound.

“I wasn’t rattled and I wasn’t nervous, I was just excited because I wanted to win this game so bad,” Hales said. “I was just kind of staring out at the scoreboard, but there was never any thought about not finishing the game. Coach just wanted to settle me down a little bit. Then he told me to get that last out.”

With Shull at second base, Hales got that last out with a strikeout. It was his 86th pitch, his ninth strikeout.

In the loss, Hunter (1-1) was terrific. He went the distance, although he allowed the first two runs he’s given up all season. He permitted four hits, walked one and struck out 10.

For the season, Hunter has struck out 57 and walked four in 28 innings.

Carson took a 1-0 lead in the first inning, taking advantage of a throwing error on a double steal.

Hales also did some work at the plate. He tripled and scored on Luke Barringer’s groundout in the third to make it 2-0.

On the at-bat that produced the triple, Hales fell behind in the count 0-and-2. With the count at 1-and-2, he fouled off four straight pitches. Then he finally got a fastball from Hunter that was in the middle of the plate and drove it hard to the gap in left-center.

“We didn’t hit the ball the way we wanted to tonight, but we couldn’t have played much better defensively,” Hales said. “This win meant a lot to our team — and it meant a lot to me.”

With 10 wins in its first 11 games, Carson has matched the 2009 team for the best start in school history.

West Rowan beat South Iredell in extra innings on Tuesday to put Carson alone in first place in the NPC.