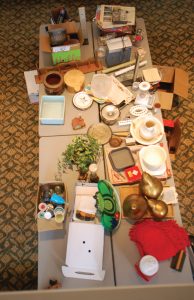 An overhead view of just one of the tables being organized for the Upscale Yard Sale this weekend at Rowan Museum. Mark Wineka/Salisbury Post 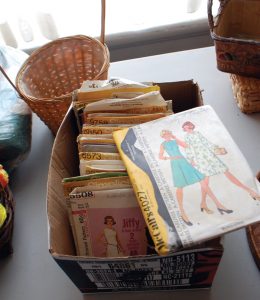 A box full of dress patterns were among items donated for this weekend’s Upscale Yard Sale at Rowan Museum. Mark Wineka/Salisbury Post 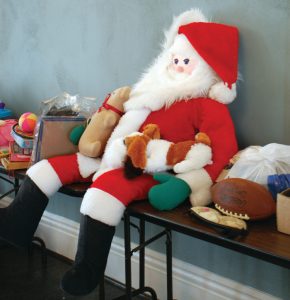 It’s never too early for Christmas, especially with all the holiday stuff that will be among thousands of other items donated for Rowan Museum’s Upscale Yard Sale this weekend. Mark Wineka/Salisbury Post 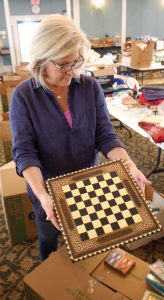 Kim Edds, a Rowan Museum volunteer, shows off an ornate chess board donated for the Upscale Yard Sale this weekend. Mark Wineka/Salisbury Post 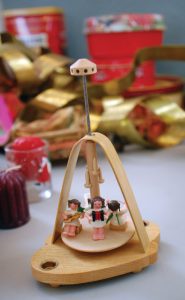 SALISBURY — Walking into the Rowan Museum’s Messinger Room on Monday afternoon, Judy Haire had the reaction most everyone did.

The number of things donated for this weekend’s Upscale Yard Sale filled the room wall to wall. All the boxes of stuff were moved in Sunday, and Rowan Museum volunteers — led by Sandra Roakes and Lyndia Huward — started sorting through things and finding places on display tables Monday.

The time-consuming task of pricing everything will come later in the week.

The museum’s annual Upscale Yard Sale began in 2014 to raise money for the organization’s many programs, and the 2018 sale proved to be the biggest.

But Aaron Kepley, executive director of Rowan Museum Inc., predicts this year’s version will set another record, just judging from the number and quality of items already donated.

“Usually the room looks like this by Friday,” Kepley said, “but this is Monday.”

Many of the boxed things volunteers had yet to organize Monday belonged to an estate. Kepley said the museum still had three houses it is supposed to visit to pick up other donations.

The Upscale Yard Sale will be held from 8 a.m. to noon Saturday and 1 to 4 p.m. Sunday at the Rowan Museum, 202 N. Main St. There is no admission price, and most items will be on display in the Messinger Room.

On Sunday afternoon, items remaining can be purchased in $5 bags. The museum provides the bag, and whatever items you fit in the bag will cost you $5 total.

Overall, the yard sale has always featured things donated by museum board members, friends of the museum and the public at large.

You name it, it’s probably here — from driftwood and a brand new toilet seat to wooden skis and boxes of rolls for player pianos.

One of the first things Cunningham pointed out was a wooden croquet set, which still has every mallet in the rack. The balls were missing, however.

“At least I haven’t seen them yet,” Cunningham said.

Kim Edds kept running across many treasures, such as a full set of Disney Snow White pins still on their original cardboard and an old Jiminy Cricket Pez dispenser.

She showed off a leather case holding a traveling bar set, a handsome chess board, a flower needlework pattern in an equally beautiful antique frame, an ashtray shaped like a whale and an 1834 book of children’s Bible stories.

Nearby, Edds picked up a 1942 desk calendar filled with newspaper stories the owner had clipped out, glued to pages or otherwise saved in a stack. She could have spent hours reading those clips.

“This was Google before Google,” Edds said.

Back against a far wall, Brenda Goodman tried to organize holiday donations — mostly Christmas related. She enjoyed looking through the baskets of new shoelaces, still in their original packaging from Hickory Industries, and the boxes and baskets of threads, yarns, dress patterns, Christmas ornaments, toys and ribbons.

Some of those ribbons are “sewing quality,” Goodman pointed out, and not just for decorating packages. She promised people patronizing the yard sale will find some good deals.

“I’m not the head honcho,” Goodman said, “but everybody’s dealing here. There are some great prices.”

“This is the ‘A’ team right here,” Roakes said.

The volunteers will attempt to organize the tables into various sections of goods, such as small appliances, books, dishware, electronics, vintage keepsakes, holiday and seasonal items, home decor and bedding.

Kepley said he won’t be able to attend the yard sale this weekend because of a commitment to be a Civil War re-enactor in Petersburg, Virginia. Fittingly, he said, he’ll be playing the role of a war deserter.

1. A procession from Rockwell to Salisbury and a funeral with full military rites at Salisbury National Cemetery provided a... read more