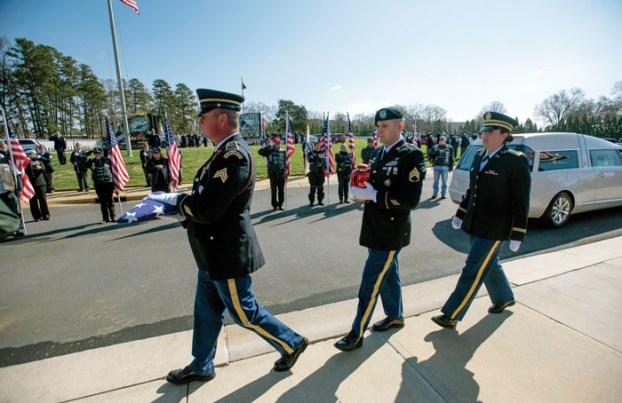 Laurel to the many responsible for Friday’s funeral and procession for the late Bertha Harrison, an Army veteran who died alone in December.

Harrison, a veteran of World War II and Korea, died at Concord Transitional Healthcare. She was 97. She had been a ward of the state for five years, and, sadly, there was no one who could claim her body or pay for a funeral. But last week a large crowd was on hand as Dupre was laid to rest with pomp and circumstance fitting of her service.

For their work to get to Friday, Carolina Cremation and Powles Staton Funeral Home in Rockwell, in particular, deserve to be applauded. Dupre’s body arrived at Carolina Cremation Jan. 3 with an American flag, but funeral director Andrew Lefko wanted to do more. He contacted Powles Funeral Home, well-known for its efforts to support veterans, and the end result was a funeral procession that brought people from near and far and stopped traffic in downtown Salisbury.

Dart to the fact that Rowan County’s ranking in a statewide health report released last week was 59 out of North Carolina’s 100 Counties, firmly putting us in the bottom half.

Many of our surrounding counties fared better in the overall ranking. Some of that, as evidenced by the items within the overall ranking, is due to the economy. However, the rankings also make clear that there’s more to making Rowan a better place to live than improving education or bringing new business to town.

We’d encourage elected leaders to take the rankings as a charge to incorporate health as a priority in their platforms when running for office and after they take their seats.

Laurel to the economic opportunity that awaits if Rowan County is successful in recruiting the company behind Project Kodiak.

The project reportedly will bring more than 600 jobs (the exact figure has not been released) and $55 million in investment. If that’s the case, it will instantly be one of the county’s largest employers and, potentially, the biggest, single economic announcement ever.

The proposed site for the business is Long Ferry Road, adjacent to Interstate 85. Because that’s a relatively rural area at present, we hope elected and appointed officials work to address any concerns residents may have in advance. Development is good, but so is ensuring that communities aren’t harmed as a result.

By Josh Wagner Needless to say, the past two weeks have been volatile for Rowan-Salisbury Schools. Personally, I have spoken... read more