GRANITE QUARRY — The “interim” in April Spry’s title was removed Monday when the Rowan-Salisbury Board of Education named her principal of Granite Quarry Elementary School.

Spry has worked for Rowan-Salisbury Schools for 18 years and has served as interim principal since December. She began her career as a third-grade teacher at North Rowan Elementary in 2001.

Her resume also includes working as a third-grade teacher at Landis, an instructional and reading design coach at Shive Elementary School, and assistant principal of Granite Quarry Elementary, a position she assumed in February 2017. 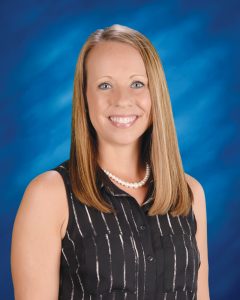 There were 28 applicants for the position. Spry’s hiring was recommended by Superintendent Lynn Moody and approved during Monday’s Board of Education meeting.

Spry takes over from Catherine Hampton, who was named North Rowan Middle School principal in December. Spry had served as interim principal since Hampton’s departure.

Moody told the Post Spry is exactly what Rowan-Salisbury Schools looks for in a principal.

“She loves education and has demonstrated exceptional leadership skills during her 18 years at RSS,” Moody said. “April possesses a passion for putting students and their success first, and she is committed to the Granite Quarry community. I am thrilled to have April on our leadership team as we move more deeply into renewal and our directional system.”

Spry told the Post that Granite Quarry Elementary will look to focus on personalized learning “to fit students where they are in their journey bringing in parents and community members as partners in that.”

Spry said it’s an exciting time in education because the district is beginning its “renewal” project.

Spry is a Rowan County native and a graduate of West Rowan High School.

She and her husband, Josh, have an 18-year-old cat that she adopted at roughly the same time she began teaching and that she and Josh met. The Sprys attend Maupin Avenue Presbyterian Church in Salisbury.