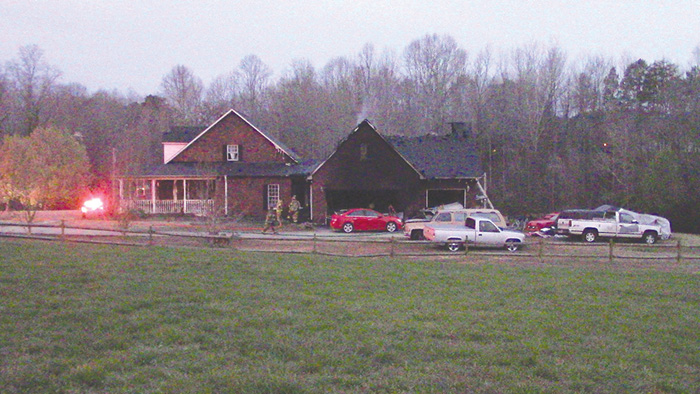 Multiple fire departments responded to a garage fire at this home located at 190 Red Leaf Lane in China Grove. Fire officials said the cause was a slow charge car battery. The fire spread to a couple of cars the owner had including two Corvettes. Photo by Paul Lof/Salisbury Post

CHINA GROVE — Multiple fire departments responded to an early Monday morning garage fire at a home on Red Leaf Lane. The homeowner and his daughter were awakened by the sound of an explosion.

Bostian Heights/China Grove Fire Chief Mike Zimmerman said the homeowner, Tim Chastain, heard the explosion and went to the garage. When he touched the door, it was hot. He called 911 at 5:12 a.m., and he and his daughter waited for fire crews to arrive.

The two-story home, located at 190 Red Leaf Lane, has a partially detached garage, which is where the fire was contained, Zimmerman said.

He said it appears the cause of the fire was a slow-charge car battery.

Chastain and his daughter were able to get out of the house unharmed.

When firefighters arrived, the garage was fully involved. Firefighters held the fire back at the garage door and kept it from spreading to the rest of the home.

There was some damage to the rest of the house, including smoke damage in the attic and on the roof. The garage was destroyed.

A Corvette and another vehicle were inside the garage along with a four-wheeler and smaller ATV-type vehicles, Zimmerman said.

The daughter had a pet rabbit that she was able to get out. The family’s cat ran across the street and had not returned Monday.

Fire crews had to haul 17,000 gallons of water to the fire scene since there was no nearby hydrant. Firefighters used water from a pond on Daughtery Road and a hydrant on Pine Ridge Road at R+L Carriers.