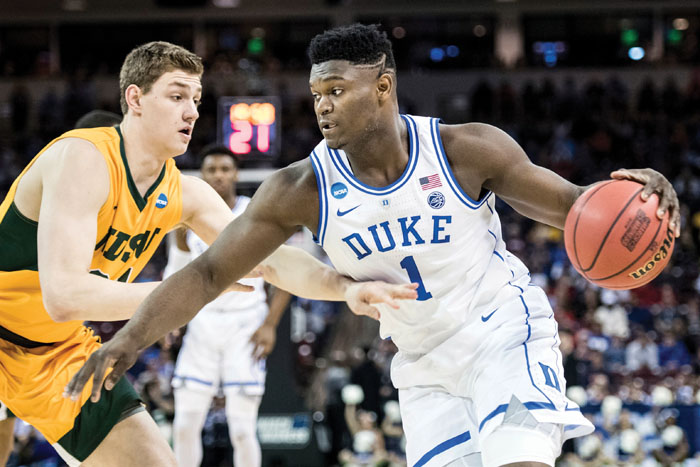 Sorry, Tacko, it’s way too late for that with excitement strong for the East Region’s marquee matchup Sunday between college basketball’s tallest player vs. its most dynamic performer in Williamson.

“Obviously, it’s very exciting,” said Fall, a full 11 inches taller than Williamson. “You got a guy who’s 7-6. You got a guy who’s a freak athlete, very talented. But at the end of the day, it’s a ballgame. It’s basketball. We can’t make it bigger than what it really is. I don’t want it to be like a freak show between Zion and I.”

Already, Fall has pledged to stand tall and not let Williamson dunk on him.

“What is he supposed to say?” Williamson responded. “He said the right thing.”

Count on both players continuing what has them a step away from the Sweet 16.

Williamson had 25 points and put on a dazzling, dominant show in the second half to lift Duke (30-5) to an 85-62 victory over North Dakota State.

Williamson knows Fall, with an armspan of 8 feet, 4 inches, will be a hurdle like none the Blue Devils have faced before.

“I got a lot of respect for him because for him to be that size and be able to move the way he does and have as much skill as he does, he’s a great player,” Williamson said.

Fall will do all he can to do what most other opponents haven’t this season — limit Williamson’s effectiveness down low.

“I’m going to be out there and be aggressive and be the (rim) protector that I am,” Fall said. “Zion is obviously a very talented kid, great kid.”

But, Fall continued, “he’s going to do his job and I’m going to do my job and whatever happens, happens.”

Duke coach Mike Krzyzewski will see a few friendly and familiar faces on the UCF bench Sunday. The Knights are coached by Johnny Dawkins, one of Krzyzewski’s first stars at Duke who played for the Blue Devils from 1982-86 and coached there from 1998-2008. UCF assistant Vince Taylor was a Duke standout when Krzyzewski first arrived in 1980-81 season. And UCF starting guard Aubrey Dawkins is Johnny’s son who spent much of his youth hanging around the Duke program with his dad.

Krzyzewski does not like going against ex-Duke assistants or players. “Why would you want to?” he said. “They’re family.”

The two have met once before with Krzyzewski’s Blue Devils defeating Stanford, where Dawkins was head coach, in November 2014 in the Coaches vs. Cancer Classic. Dawkins believes that took away many of the awkward feelings if this were the first time. “You still don’t relish it,” he said. “But it’s still something you’ve already experienced.”

Duke freshmen RJ Barrett and Williamson enjoy each other — and enjoyed seeing their excitement captured in an amazing photo from Friday night’s win over North Dakota State. The picture shows Barrett holding the rim after a dunk and Williamson in the background leaping almost as high in celebration.

“We like to celebrate for each other,” Williamson said. “So whenever one of us gets it done, you’ll probably see the other one in the background jumping just as high as him.”

Virginia Tech and Liberty played way back before the season even started in a charity game to raise money for hurricane relief.

The Hokies (25-8) won that game 86-70 but came away impressed enough that it was no surprise when the 12th-seeded Flames (28-6) upset Mississippi State in the first round to earn a rematch.

“We kind of predicted as a team that we were going to end up playing Liberty because we thought they were going to get overlooked by Mississippi State, and that’s kind of what happened I think,” point guard Justin Robinson said. “We just know they’re a good team, they run good sets and it’s going to be a battle. It’s so long ago. We’re a whole different team and they’re a whole different team so it’s not really what you can take from that game.”

Robinson scored 20 points in that game for Virginia Tech and figures to be a key piece again in the rematch after returning from a 12-game absence from a foot injury. Robinson came off the bench in the fourth-seeded Hokies 66-52 first-round win over Saint Louis.

The key for the Hokies will be slowing down Caleb Homesley, who scored 30 points in the first round to key the comeback from 10 points down in the final seven minutes.