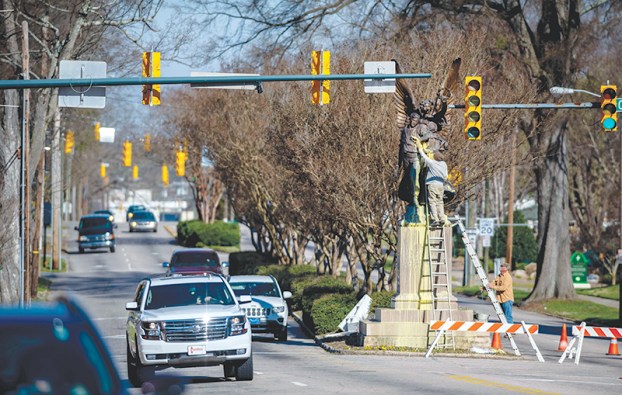 1. A procession from Rockwell to Salisbury and a funeral with full military rites at Salisbury National Cemetery provided a sendoff for military veteran Bertha Harrison Dupre on Friday morning. During World War II, Dupre served in the Army’s only all-black, all-female battalion whose main duties focused on what?
A. Food distribution out of Paris
B. Mail delivery in Europe
C. Laundry service for Allied officers
D. Breaking Nazi codes

3. The Rowan Economic Development Commission says a site on Long Ferry Road is still in the running for an online retailer’s “e-commerce fulfillment center,” which could bring hundreds of jobs, a 700,000-square-foot building and a $55 million investment. What’s the name the EDC gave this potential business?
A. Project Operator
B. Project Systems Go
C. Project Flintstone
D. Project Kodiak

4. Vandals threw yellow paint on the Confederate statue in downtown Salisbury sometime Wednesday morning, bringing to mind that seven months earlier the 1909 statue also was vandalized. What happened to the statue in the first incident?
A. Its granite base was spray-painted.
B. A sheet was placed over the heads of Fame and her soldier.
C. White paint was thrown on the statue.
D. A blue mustache, made out of chicken wire and cardboard, was attached to the winged Fame.

5. According to a report from the Robert Wood Johnson Foundation and the University of Wisconsin Health Institute, Rowan County ranks 59th out of 100 N.C. counties for health outcomes. Which of the following statements is true about the county, based on that health report?
A. A higher percentage of adults 20 and older reported they were doing no leisure-time physical activity.
B. Rowan County is getting worse in adult obesity, with 33 percent of the population considered overweight.
C. 25 percent of the people in Rowan County carry no health insurance.
D. 35 percent of Rowan County’s adult population use some form of tobacco.

6. The town of Landis filed a lawsuit this past week against former Town Manager Reed Linn and Finance Officer Ginger Gibson for the misappropriation of funds. For now, the suit says Linn and Gibson each received unauthorized compensation in excess of how much?
A. $5,000
B. $15,000
C. $25,000
D. $45,000

7. By a 4-1 vote and despite a 470-name petition against it, the Rowan County Board of Commissioners approved Monday a rezoning — with some conditions — that will allow construction of a Dollar General store. Where will it be?
A. N.C. 152 and Organ Church Road
B. N.C. 152 and Old Concord Road
C. Organ Church Road and Old Beatty Ford Road
D. U.S. 52 and Sides Road

9. Tammy Grinshpon, the daughter of Holocaust survivor Ela Weissberger, spoke recently at Temple Israel in Salisbury about her Jewish mother’s imprisonment at the Theresienstadt concentration camp. What country is Weissberger originally from?
A. Czechoslovakia
B. Hungary
C. Germany
D. Poland

10. Rick Travis, 66, went out for a run the afternoon of Feb. 11 and hasn’t been seen since, despite a massive manhunt in the days after his disappearance. A Silver Alert was not issued. Why?
A. He is not old enough.
B. He went missing on foot and not in a vehicle, while suffering from dementia or Alzheimer’s disease
C. Rowan County is not part of the Silver Alert network.
D. A reward has been offered for help in finding him.

Nine Rowan Countians will be among April 27 inductees into N.C. Military Veterans Hall of Fame

By Mark Wineka mark.wineka@salisburypost.com SALISBURY — Of 29 people set to be inducted into the N.C. Military Veterans Hall of... read more