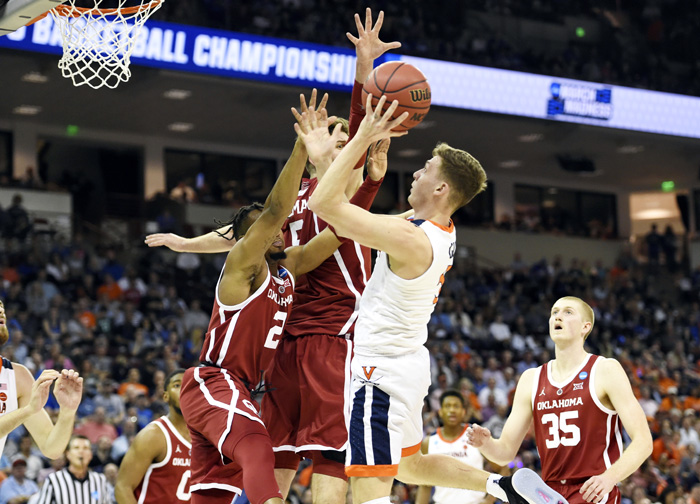 Virginia's Kyle Guy (5) shoots while defended by Oklahoma's Aaron Calixte (2) and Matt Freeman (5) during the second half of a second round men's college basketball game in the NCAA Tournament in Columbia, S.C. Sunday, March 24, 2019. (AP Photo/Richard Shiro)

COLUMBIA, S.C. (AP) — Virginia finally breezed through an NCAA Tournament game and beat Oklahoma 63-51 on Sunday night to advance to the Sweet 16.
Mamadi Diakite scored 14 points and had nine rebounds as the No. 1 seeded Cavaliers led for all but three minutes against Oklahoma.
The game was a marked improvement for Virginia, which last season became the first overall No. 1 seed to lose to a No. 16. The Cavaliers (31-3) didn’t have it any easier in this year’s NCAA opener and trailed by as many as 14 to No. 16 Gardner-Webb before rallying for the first-round victory.
There was only one scare in the second-round matchup and it was rather mild: Virginia scored the first seven points of the game, but Oklahoma (20-14) answered with a 13-2 run to take its only lead.
Virginia cranked up its trademark stifling defense and the Sooners hit just four of their last 18 shots in the first half to fall behind 31-22 at the break. After a Kihel Clark rebound and putback on the first possession of the second half, Virginia’s lead never dipped below 10 points again.
It was the first time Virginia hasn’t trailed in the second half of an NCAA Tournament game since beating Iowa State 84-71 in the Sweet 16 in 2016.
Diakite was a surprise starter and ended up leading the Cavaliers. Less than an hour before the game, Jack Salt was listed in the starting line-up provided by Virginia. But Diakite, coming off 17 points and nine rebounds against Gardner-Webb, instead got the start.
Ty Jerome added 12 points and Braxton Key his all four of his shots to as he added nine points and nine rebounds for Virginia.
Brady Manek and Chistian James each scored 12 for the Sooners.
Oklahoma shot 57.6 percent (34 of 59) to beat Mississippi by 23 in the first round, The Sooners shot just 36.5 percent (19 of 52) on Sunday night.
Virginia’s win pushed all four No. 1 seeds into the Sweet 16 for the first time since 2016 — the last time the Cavaliers made it to the tournament’s second weekend.

BIG PICTURE
Oklahoma: Picked to finish eighth in the Big 12 after one-and-done NBA rookie sensation Trae Young left, the Sooners overachieved to make it to the NCAA Tournament second round.
Virginia: Cavaliers coach Tony Bennett said he told his team when they were down 14 in the first half to Gardner-Webb that they had to pound the ball inside. The lesson carried over to Sunday. Virginia had 32 points in the paint while Oklahoma scored just 12 inside. Bennett is trying to lead Virginia to its first Final Four in his 10 seasons with the Cavaliers.

UP NEXT
Virginia: The Cavaliers play the winner of No. 12 seed Oregon and No. 13 seed UC-Irvine in the Sweet 16 on Thursday in Louisville.