Tar Heels take on the Huskies in second round 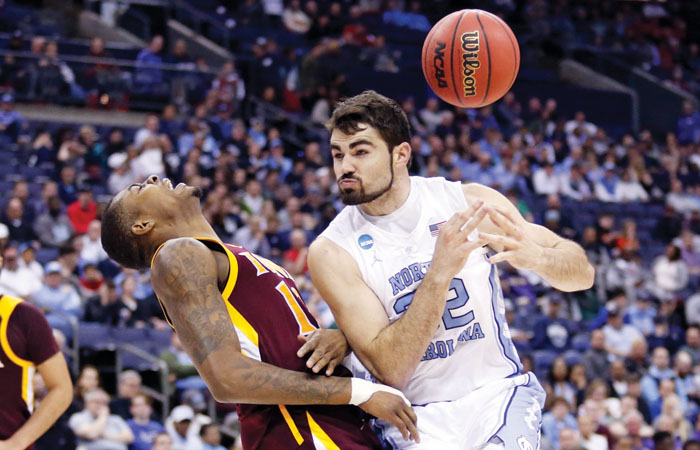 COLUMBUS, Ohio (AP) — Top-seeded North Carolina is trying to avoid a repeat of last year’s NCAA Tournament, when the Tar Heels couldn’t make it out of the opening weekend.

They’d much rather it to be like the last time they came into March Madness as a No. 1 seed. That was in 2017, when they rolled all the way to a national championship.

North Carolina (28-6) has the firepower. Graduate transfer Cameron Johnson averaged 17.1 points per game during the season and had 21 in a first-round win over Iona Friday, despite the Tar Heels sleepwalking through the first half. Freshman guard Coby White can score from anywhere, and Luke Maye is an intimidating inside presence and the only one of that trio to have experienced the glory of winning it all two years ago.

Last season, this was this point when the wheels fell off. Entering as a No. 2 seed, North Carolina swept by Lipscomb then was walloped by seventh-seeded Texas A&M, 86-65, in the round of 32.

North Carolina is just 3-3 in second-round games in the last six seasons.

The Tar Heels will have to get by ninth-seeded Washington (27-8) this time to make it to the Sweet 16 for the 30th time. The Huskies, the Pac-12 regular-season champs, took down No. 8 seed Utah State in the opening round Friday.

Some other things to watch in the Midwest:

March brought stormy times for Ohio State, to the point where it looked like this season would be one to forget.

With their best player, Kaleb Wesson, benched for violating team rules, the Buckeyes were pounded by Purdue on March 2 and Northwestern on March 6, then lost to Wisconsin in overtime on March 10.

With Wesson back, an important win over Indiana in the Big Ten Tournament made Ohio State a bubble team for the selection committee. The Buckeyes (20-14) were slotted into the Midwest Region as a No. 11 seed and beat sixth-seeded Iowa State in the opening round.

“Tou could say it validates the committee’s decision, but we really felt like we had put together a really strong body of work and that our guys had earned it,” Ohio State coach Chris Holtmann said.

Now they get No. 3 seed Houston (32-3) on Sunday in Tulsa, Oklahoma. The Cougars dispatched Georgia State in the opening round.

Houston was also stung by an early dismissal from the tournament last year.

After getting by No. 11 seed San Diego State by 2 points in the opening round, the sixth-seeded Cougars ran into No. 3 seed Michigan and went home after a 64-63 loss.

“I feel like all the returners who came back from last year’s game, they’ve been on fire since June,” guard Corey Davis Jr. said. “We all experienced what it felt like to lose in March and especially in that type of fashion. … You can’t have better motivation.”

Questions of the Washington players by reporters have tended to stray into the area of coach Mike Hopkins and his enthusiastic antics. He has been known to drop and do push-ups during press conferences, and he played so hard in the first scrimmage with his players that he ended up with a broken nose.

Said Hopkins: “The one lesson that I learned is be who you are. And I’m 49 going on 14 sometimes. I like to have fun. I like to interact.”