High school girls soccer: Henry is back, but South has lots of new faces 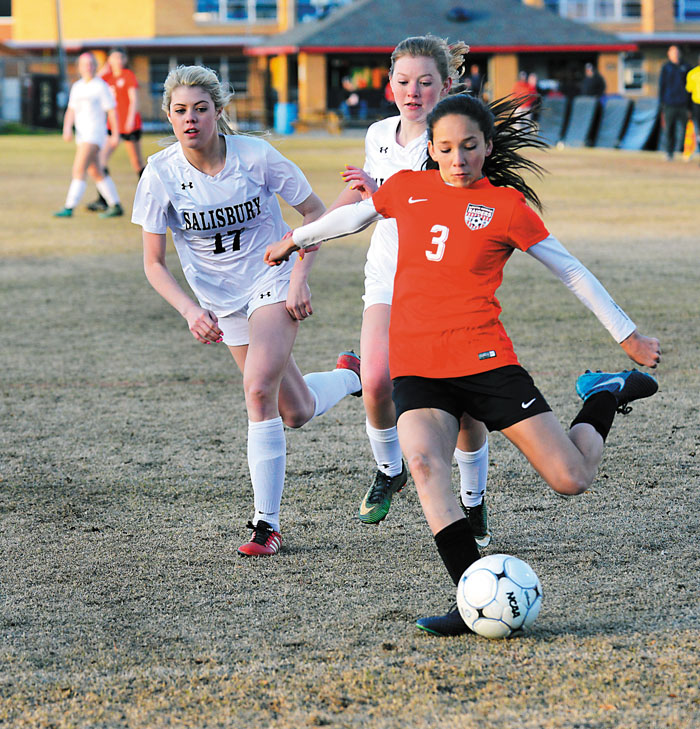 Wayne Hinshaw file photo/for the Salisbury Post ... South Rowan’s Madison Henry (3), shown during a match last year against Salisbury, takes a shot on goal as the Hornets’ Olivia Dagenhart (17) looks on. Henry is on the verge of setting a new Rowan County career goals record — as a junior.

Playoffs: Lost 2nd round 2A to CCC champ Salisbury

Next match: Home vs. Lexington, Monday

LANDIS — Christina “Chrissy” McLamb is debuting as South Rowan’s head girls soccer coach, and the majority of the girls she’s sending onto the pitch are sophomores and freshmen.

“I don’t think where we are right now in the Central Carolina Conference standings indicates who we are or who we will be,” McLamb said. “We’ve had a lot of adversity, but we’re on the mend now.”

McLamb was once a Raider soccer player herself, turning in all-county and all-conference seasons in the early 2000s. She went on to Liberty University in Lynchburg, Va., as a business major.

After a number of years in the corporate world, she earned her MBA from Liberty in 2016 and returned to South as a business teacher.

McLamb assisted Kyle Neal as a rising South program made noise in the Rowan soccer world. When Neal was hired as the first women’s head coach at Piedmont International, McLamb was elevated to lead South’s girls.

South still has Madison Henry, who will soon become the greatest goal-scorer in the history of Rowan County girls soccer. Henry followed up a 30-goal freshman season with an astounding 61-goal effort as a sophomore to shatter Rowan’s single-season record. The listed NCHSAA record for goals by a sophomore is 64.

Now a junior, Henry, a UNC Wilmington commit, has scored eight goals so far this season to bump her career total to 99.

“Madison is a great decision-maker,” McLamb said. “She’s hard to man-mark because she moves so well and because she can come at you from a lot of different places.”

Henry usually will be attacking from the midfield with eye-popping quickness.

South’s other veteran standout is Rhiannon Kimmer, a steady forward who is moving on to play for Neal at Piedmont International. Kimmer is the only senior on South’s roster. She and Henry are co-captains.

South had a terrific senior group in 2018, a graduating class that included players such as Raquel Landaverde, Taylor Mauldin and Katelyn Goodman. Those seasoned veterans provided the canvas on which Henry painted her amazing season and the Raiders won a school-record 17 games.

South is much greener this season and is plugging holes with rookies, but McLamb is confident the talent is there to get things rolling.

“We just need experience,” McLamb said. “I believe the sophomore class we have now can be as much of a force as the senior class we had last year.”

The sophomores include strong defenders Paige Chabala and Kylie Giddings.

Then there’s freshman Ana Rubio, who can play a lot of positions. McLamb is still determining where she can help the Raiders the most.

“She’s the most aggressive player I’ve ever seen,” McLamb said. “She’s just a bulldozer. I love the aggressiveness. She just has to be smartly aggressive.”

South has a freshman goalkeeper in Sydney Phillips. A forward in middle school, she filled in at keeper in an emergency situation and showed that may be her calling.

“She can be big-time as a keeper,” McLamb said.

A pleasant surprise for South has been junior Ambar Hernandez, who scored a couple of goals last week. Opportunities are going to be there for different Raiders to score goals because Henry is going to command the attention of multiple defenders.

South was a very stout team last season, outscoring opponents, 93-32. Even if you subtract Henry’s 61 goals, her teammates scored as many goals as South’s opponents.

South’s fortunes have been reversed so far this season. The Raiders have been outscored, 41-15. South is 0-4 at home, which hasn’t been fun.

But there’s a long way to go.

“This conference is strong, it’s always really strong,” McLamb said cheerfully. “But we’ll be fine. Our best is ahead of us.”