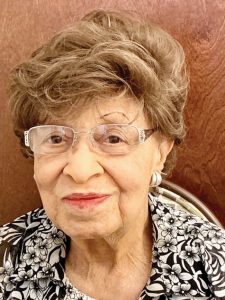 Esther Commander Marioneaux was, above all else, a lady. She was widely loved throughout Salisbury.

Marioneaux was a pianist and organist, a French and English teacher in the public school system, a wife and a mother to some quite successful children — but above all, she was a lady.

At the age of 92, she died Tuesday after a period of illness. She was remembered fondly by those who knew her.

Local educator Raemi Evans knew Marioneaux through many stages of her life. Evans was a student of Marioneaux’s at Price High School. She student-taught under her tutelage. And when Salisbury schools were desegregated, Evans was the first African-American teacher to teach at Boyden; Marioneaux was the second.

Their classrooms were across the hall. They were members of Jack and Jill of America, Inc., and flew together to national conventions. When Sedgefield Acres, often called, “the negro country club” was built in the 1960s, Evans and Marioneaux were next-door neighbors. Most of all, Evans says, they were friends. Evans knew her for 65 years. In the classroom, she said, Marioneaux stressed good citizenship and made an indelible and positive impression on students, coworkers and friends.

Evans remembers Marioneaux’s sense of humor. They once flew to Denver for a Jack and Jill event. The plane had a little turbulence. Marioneaux turned to her and, with a straight face, said, “I’ve got my rosary — have you got yours?”

Another close friend and neighbor is Greta Connor.

Connor said Marioneaux had “impeccable character,” and was highly intelligent. She respected herself so that others respected her as well. At Sedgefield Acres, Connor says Marioneaux kept her home, inside and out, immaculate, believing a home should represent the people who live there.

Marioneaux often told the story about Leo Wallace building Sedgefield Acres, an upper-middle-class neighborhood for African Americans. He intentionally sought out black professionals and invited them to consider buying a home. When he asked her, she replied that no bank would loan a black couple the money for a new home.

“I’ll stand for your loan,” he promised, and Esther and husband Harold, a physical therapist at the VA, were one of the first families to buy a new home there.

Donaldson said, “Mrs. Marioneaux groomed me into what I was meant to become.”

He remembers that she was quite exacting, correcting him when he came to work wearing red socks. Because he was an attractive young man, young female teachers would often make excuses to come to Marioneaux’s classroom to see him. Marioneaux, he said, would tell them, “I’m sorry, Mr. Donaldson is busy.”

“Many times, I was about to make mistakes, and she would call me: ‘Oh, no, that’s not how we do.’ She had a huge impact on me,” Donaldson recalled.

Retired educator Margaret Basinger began teaching during the first year of school integration in Salisbury. She taught at Knox Junior High with Marioneaux.

“She befriended me,” Basinger said, “and from that first year of teaching in 1969, we became lifelong friends.”

The school board closed all black schools that year and sent all black students to white schools. Looking back, Basinger recalled how insensitive that was, and how frightened the black students must have been.

“Esther did more to help the black students integrate into this whole new world than anyone else. Integration was a whole lot smoother because of Esther Marioneaux, the model she presented to the black students — and to me,” Basinger said.

She continued, saying, “The term that keeps coming to me is role model. She taught us all how to rise high when others go low. She always rose above. She could have written the phrase.”

Judge Larry Ford helped Marioneaux buy a new car several years after her old one was damaged in an accident. He and wife Lawana took her to Winston-Salem, helped her select a good car and negotiated the price for her. A man from the dealership delivered the car to Marioneaux at her home in Sedgefield.

She invited him in and he played her piano. The Fords said, “She was a class act all the way around.”

Raleigh attorney Bryan Beatty grew up on the corner of Monroe Street and Institute Street. His dad was former Mayor Pro Tem O.K. Beatty. At that time, the Marioneaux family lived on Institute Street, directly across from the Beatty family.

Beatty recalled Marioneaux in his earliest memories. He was a member at Moore’s Chapel AME Zion Church on Monroe Street, where Marioneaux was organist and choir director. Beatty says it was a rare Sunday that they missed church.

“Really,” he says, “their home was like my second home. I ate many a meal at their house. Mr. Marioneaux did most of the cooking. When I ate over, I remember hoping for his jambalaya.” He says their home was always very loving, very welcoming and warm. Many in the community, he says, thought of Marioneaux as an aunt or a second mother.”

Godson Derrick Black, a project manager in Atlanta today, grew up in Sedgefield Acres. He says she was his godmother, neighbor, teacher and fellow church member. When Black’s parents travelled out of town, he stayed in her home and knew he had a warm place to lay his head. Black played the violin and Marioneaux encouraged him, even including him in musical pieces at church. If he missed the bus, she always came to the rescue.

“Mrs. Marioneaux made us laugh in class. She was a woman of a lot of dignity and grace and presence,” Black said. “She instilled a lot of pride in us as black students in school and challenged us to rise to decorum and distinction. We were to be a glowing presence in this world. She instilled this in us.”

Marioneaux organized a trip to Europe for her students in 1975, when international trips for students were a rarity. Michael Connor, a Salisbury and Sedgefield native, remembers traveling to France, England, Belgium, Lichtenstein, Austria, Germany and Switzerland. He says the parents let their children go on the trip only because of Marioneaux’s stellar reputation.

“We went to the Louvre, Buckingham Palace and crossed the English Channel,” Connor said. “It was our first exposure to international travel, and I am still traveling to this day. It was a once-in-a-lifetime experience.”

Beverly Johnson lives in Florida now, but grew up five doors down from the Marioneaux home. She and her siblings were the same ages as the Marioneaux children. She, too, took the trip to Europe.

“She was my French teacher and my mentor,” Johnson said. “She taught me grace and elegance.”

Marioneaux taught her to buy clothing in quality, not quantity. Marioneaux’s wardrobe was a legend.

Local musician Phyllis Partee was a student in Marioneaux’s French class She sang in the Knox Junior High talent show, and Marioneaux remembered the exact song for many years afterward. Partee says she remembered details about all her students, and it made them feel special.

As an adult, Partee was often referred for music jobs by Marioneaux.

“She would sometimes come to programs with my gospel choirs,” Partee said. “When she walked in, I felt that I needed to sit up straight. I needed to be what she expected of me. I wanted to make her proud.”

Calvin Turner sang in her choir at Moore’s Chapel for 20 years. “We called her mother,” he said. Marioneaux taught him to read music. He started as a tenor and she taught him to sing bass.

Rev. Vernon Shannon was Marioneaux’s pastor at Moore’s Chapel for a decade. Shannon says she was a distinguished classical church organist. She played the classical hymns, and the choir was recognized for distinction. She always played Handel’s Messiah at Christmas and Easter, he says, and the church was packed for these events.

Marioneaux transferred her membership from Moore’s Chapel to First Presbyterian Church some 25 years ago. John Grubb and his mother Collin came to know her there. Because Marioneaux’s children all lived out of state at the time, Grubb would take Marioneaux out to dinner on Mother’s Day with his own mom.

“In all she did, she epitomized love and grace and style,” Grubb said. “A lot of people talk about class. She never talked about it, but she had it in buckets.”

“One of the dearest memories I have of Esther was when she came to talk with me about becoming a member of our church family. It was something she wanted to do; it was a decision of the heart,” Lewis said. “Happy was the day when I introduced her as a member of the First Presbyterian family. I never pressed her to tell me why she made the decision, but I was so deeply thankful. Esther was a transformative presence.

“We loved her, and she loved us. We were a family. We thank God for the years we had together.”

Esther’s adult children surprised her with a 90th birthday party in 2017. More than 100 people crowded into the upstairs room at Rowan History Museum. Of course, they toasted her with a round of “La Marseillaise.”

Visitation is at Noble & Kelsey Funeral Home today from 5:30 p.m. to 7:30 p.m. Her funeral is at First Presbyterian Church on Monday at 1 p.m.