Casey holds on to repeat title at Valspar Championship 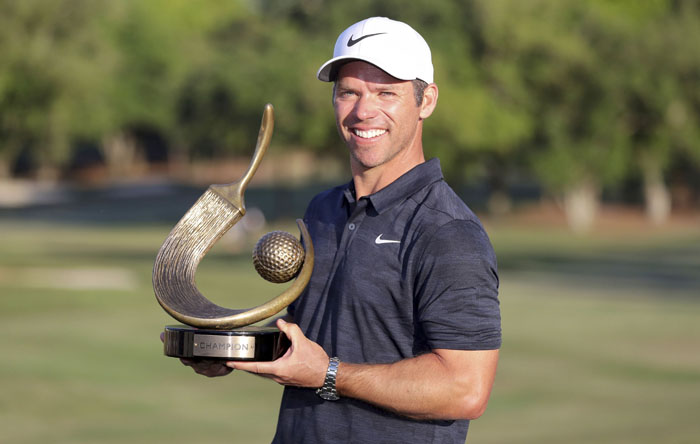 PALM HARBOR, Fla. (AP) — Paul Casey got the battle he expected Sunday in the Valspar Championship.
Just not from Dustin Johnson.
Casey and everyone else had full attention on a Copperhead course at Innisbrook that made the final round feel more like survival than a shootout. Casey did just that, closing with a 1-over 72 for a one-shot victory that made him the first back-to-back winner in the 19 years of the tournament.
He rallied from five shots behind last year with a 65.
This time, he became the first winner at Innisbrook with a final round over par.
“It feels very different, but not any less cool,” Casey said after making par from a fairway bunker on the 18th to avoid a playoff with Jason Kokrak and Louis Oosthuizen. “That golf course is so difficult that it’s damn near impossible to have a clean round of golf and not make any mistake. But I was composed. I was very keen to play well. I made mistakes, but then, so did everybody else. I got it done, and I couldn’t be happier.”
The course was so dry and fast that no one shot better than 68, and the average score of 72.143 was the second-highest average for a final round this year on the PGA Tour behind rainy, windy Riviera.
Kokrak (71) and Oosthuizen (69) each had a share of the lead on the back nine until one mistake cost them.
Oosthuizen, who hit only six greens in regulation, opted for a fairway metal from just behind the 16th green and hit it too firmly. He missed the 8-foot par putt and never caught up.
“There was too much grass behind the ball,” he said. “I saw all the grass behind the ball and I just gave it a little bit too much. I don’t think I would have chipped it any closer.”
Kokrak had a good lie in trampled, dry grass near the cart path on the 18th hole, but his shot came out short of the green into a sprinkler hole. A free drop put him in a position to putt, but he was short and left, and missed the 8-foot par putt to fall one shot behind.
“Played good golf all week, just not the way I wanted to finish,” Kokrak said.
Behind him was Casey, in one of the bunkers that resemble a miniature version of Oakmont’s church pews, facing a key shot into the wind to an elevated green. It came out perfectly to the right of the flag, and his birdie attempt grazed the left edge of the cup and left him with one of the easiest shots he had all day.
Casey finished at 8-under 276 and moved to No. 11 in the world.
It was the third straight week for a European-born winner on the PGA Tour, the first time that has happened since 2010 when Justin Rose (Memorial), Lee Westwood (St. Jude Classic) and Graeme McDowell (U.S. Open) won in successive weeks.
Nothing came easily for Johnson, who started one shot behind and failed to make a birdie putt for the first time in 31 tournaments worldwide. The last occasion was the HSBC Champions in 2017, when he lost a six-shot lead. This time, even with no birdies and two bogeys until late in the round, he was still in the mix.
That ended on the par-5 14th, when Johnson was just short of the green facing a stock chip. He ran it 5 feet by the hole and missed. Casey was on the hill and lofted a pitch onto the green to 2 feet for a birdie that restored his lead.
Johnson closed with a 74 and tied for sixth.
“I didn’t feel like I played bad,” Johnson said. “Felt like I was swinging well and I still feel like I’m swinging well. I still got a lot of confidence in the game but just, yeah, tough day. Tough conditions and wasn’t spot on.”
Casey appeared to have the tournament in hand when he found the green about 35 feet below the hole on the par-3 17th. But he left it 5 feet short and missed the par putt, falling back into a share of the lead.
Kokrak made bogey ahead of him, leaving Casey only needing par on the 18th for the victory.
The biggest challenge for Casey?
“Combination of myself and this golf course — the golf course providing such a stern test and myself, can I rise to that test and that challenge that it’s providing and deliver?”
The tournament allowed players to choose whatever name they wanted for the caddie’s bib. Casey went with “The Champ,” and he found one positive to the week before he even collected his trophy.
“I don’t have to change the caddie bib,” he said.
Too late. The tournament already has “The Champ X 2” ready for him next year.