Book review: ‘Maid’ tells what it’s like to be the working poor 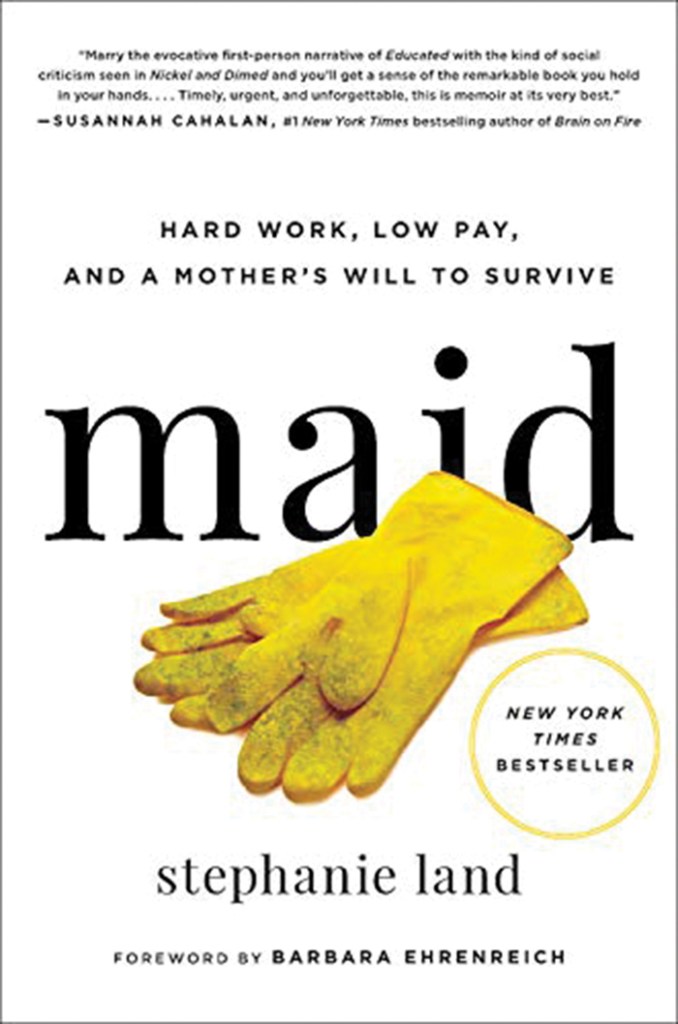 “Maid,” Stephanie Land’s memoir from her days of scrubbing other people’s toilets, starts with this woeful sentence: “My daughter learned how to walk in a homeless shelter.”

Young people who prefer to learn from other people’s mistakes rather than their own should read Land’s first-person account of working at one of the country’s lowest-paid jobs — and how she wound up there.

The book is also must-reading for people who believe everyone on government assistance is a deadbeat. Land’s day-to-day struggle, barely surviving at a low-wage job even with the government’s help, will challenge their thinking.

Land’s problems were admittedly self-inflicted, starting when she left a bar late one night and was drawn to a young man on a park bench, Jamie.

They are both cafe workers in their late 20s living in Port Townsend, Washington. The tourist-rich community thrives but has little to offer young people besides service jobs — especially for those with a limited education. Jamie, a sous chef, never finished high school. Land, a waitress, graduated from high school and intends to go to college — some day.

Four months later, after moving in with Jamie in his 20-foot camper trailer, Land discovers she’s pregnant. Jamie turns angry and hateful at the thought of having to support a child.

Land is soon raising daughter Mia on her own, with nowhere to go, no financial cushion and no family support. Mother and child move from shelter to transitional housing to subsidized housing, navigating a system that metes out help sparingly but requires copious documentation.

“I had looked under every stone, peered through the window of every government assistance building, and joined the long lines of people who carried haphazard folders of paperwork to prove they didn’t have money,” Land writes. “I was overwhelmed by how much work it took to prove I was poor.”

In all, she taps seven different programs — all while working part time in landscaping and housekeeping — to avoid  having to return to the shelter.

Land’s struggles would prompt a “been there, done that” response from thousands in Rowan County, where the Department of Social Services administers 28 programs. In fiscal year 2018, some 47,679 Rowan residents received help through Medicaid, food and nutrition services or Work First benefits. The average monthly check issued to people through Work First — what most people think of as “welfare”  — was $137.

Loneliness leads Land to Match.com and another mismatch, this time with Travis. He makes a living helping his parents maintain boarding stables for dozens of horses. That means hard work — feeding horses, baling hay and mucking stalls — and little money.

Land moves in with him with romantic ideas, not about Travis as much as about being part of a family unit. She feels stigmatized as a single mother barely getting by, and she fears losing custody of Mia to Jamie.

Land constantly worries about whether she’s being a good mother, where she’ll get the money to pay her bills and how she must look to other people — especially as she uses government help to buy groceries.

“I was grateful for programs that fed my family, but I’d also carry back home a bag of shame, each time mentally wrestling with what the cashier thought of me, a woman with an infant in a sling, purchasing food on public assistance.”

Land gets to see how the other half lives after she signs on with Classic Clean cleaning service — “the last job on earth” — to clean strangers’ homes, usually without ever seeing the occupants. She who has virtually nothing has to clean behind middle-class men and women who have more possessions than they can use. Resentment comes through in some of Land’s commentary, but so does a note of sadness for her clients.

“I became a witness. … I’d learn what they ate for breakfast, what shows they watched, if they’d been sick and for how long. I’d see them, even if they weren’t home, by the imprints left in their beds and tissues on the nightstand. I’d know them in a way few people did, or maybe ever would.”

Land’s relationship with Travis sours, and eventually she and Mia are on their own again. They move into a damp apartment and Land takes on as much work as Classic Clean will give her.

While outwardly resilient, inside Land is reeling from the verbal abuse and trauma she endured in her relationships, not to mention the stress of her financial situation. Her worries verge on obsessions.

“Every single parent teetering on poverty does this. We work, we love, we do,” she says. “And the stress of it all, the exhaustion, leaves us hollowed. Scraped out. Ghosts of our former selves. … I knew that at any moment, a breeze could come and blow me away.”

As sympathetic as Land’s story is, at times it becomes wearisome. Land pushes on, though, and so does her story, proving in the end that hard work and persistence can keep dreams alive — and eventually realized.