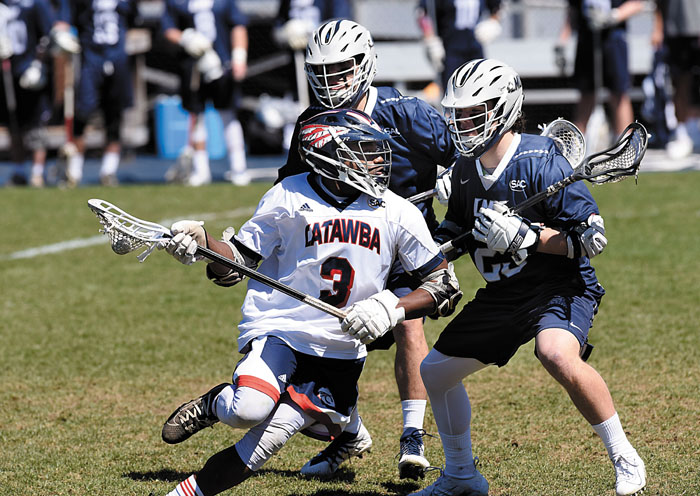 SALISBURY — Anyone waiting for a letdown from the Catawba men’s lacrosse team will have to wait a little longer.

“It’s almost like a relief, but we’re still excited about winning,” senior defender Keenan D’Arcy said, just moments after conference-leading Catawba (7-2, 4-0 SAC) used a late goal by midfielder Joe Barber to earn its school-record seventh straight victory. “In a way, it was good to be in a tough game like this. It showed we can battle back.”

With blue skies and sunshine framing Shuford Stadium, Catawba watched LMU (3-7, 1-3) race to an 8-2 lead late in the opening half. “We came out playing to win,” said losing coach Carroll Kennedy. “But the second we got that big lead, we started playing not to lose. That’s all it took for them to get back in the game.”

Barber’s goal with 2:58 remaining capped a dramatic comeback. Catawba, which trailed for about 45 of the game’s 60 minutes, received three goals apiece from attackman Tony Bellotte and midfielder Robert Morrison, who converted each of his attempts. Teammate Shawn Casebolt won 10 of 14 face-offs in the second half and goalie Kevin Geiger made 10 saves — including two in succession as Catawba killed off a fourth-quarter penalty.

“Our goalie made some fantastic stops there,” said 26th-year Catawba coach Peter Bourque. “He gave us possession and kept us in the game.”

LMU scored five unanswered goals and took its biggest lead when Ian Cook took a feed from Robert Tucker and buried the second of his three goals with 2:48 to go in the first half.

“We let the whole team down,” said D’Arcy, who teamed with Reese Scott, Payton Leonard, Joey Monfort and Shane McCormick in Catawba’s defensive end. “We didn’t have any chemistry back there. We were too afraid to take the game to them. We let them take it to us and it got us all out of our comfort zone.”

The turn-around began taking shape half-a-minute later, when Bellotte whipped an underhanded shot past LMU keeper Trenton Cameron. “We looked at the clock, looked at the scoreboard and knew we had to do something to get back in the game,” Bellotte said. “The good thing was, we all stayed positive.”

Two goals in the final 12 seconds of the first half — Bellotte on a breakaway and Casebolt on a drive right down Broadway after winning the ensuing face-off — trimmed Catawba’s deficit to 8-5 at halftime. And when Morrison converted on the Indians’ first second-half possession, it was a two-goal game.

“We’ve been a pretty hot second-half team,” said Morrison, who added two assists. “It was a slow start. We were coming off that win against Wingate and they came at us with a high-powered offense. But we always pride ourselves on being a second-half team.”

They were a fourth-quarter team yesterday. Down 12-10 with nine minutes to play, Catawba used back-to-back goals by Fanzo to pull even.

“Twelve-11 and 12-12,” Fanzo pointed out. “I’d been frustrated all day — probably because I had a good game against Wingate and they wanted to stick close to me.”

His first goal came after junior Trevor Bellotte confiscated a loose ball and fired to pass to Morrison, who threaded an on-the-money feed to Fanzo. “And I just sent it home as hard as I could,” he said.

Two minutes later, Fanzo rifled a close-range shot that was blocked in front and fortuitously bounced right back to him. He scooped the rebound and wristed a shot that Cameron never saw, knotting the score with 6:12 on the clock.

“He’s just a big-time player,” Morrison said of Fanzo, his roommate the past four years. “When you need it the most, give him the ball and he’ll capitalize.”

It set the stage for Barber’s game-winner. An all-conference senior, he ripped a 10-yard shot past Cameron that gave Catawba its first lead since it opened the scoring just 2:10 into the match.

“No. 5 (teammate Christian Norrie) made a hard move to the middle,” Barber said. “And he found me open on the back side for a catch-and-shoot — right between the legs.”

Barber teamed with Morrison to melt away the game’s final 46.3 seconds after LMU was whistled for a penalty. When it ended, the Indians celebrated like a first-place team.

“We really had to fight for that one,” Fanzo said. “The heart was always there, the fight was there and we ended up pulling it out.”

NOTES: Tony Bellotte leads Catawba with 28 goals and 33 points. Fanzo has scored 27 times. … Norrie scored a man-up goal that drew the hosts within 9-7 early in the third period. …Cook, a sophomore from upstate Horseheads, N.Y., scored three goals and leads LMU with 28. … The Indians held a 39-34 edge in shots and narrowly won the ground-ball battle, 35-34. … Catawba visits Mars Hill next Saturday to begin a three-game road trip. Its home finale is scheduled for Apr. 13, as Queens visits.