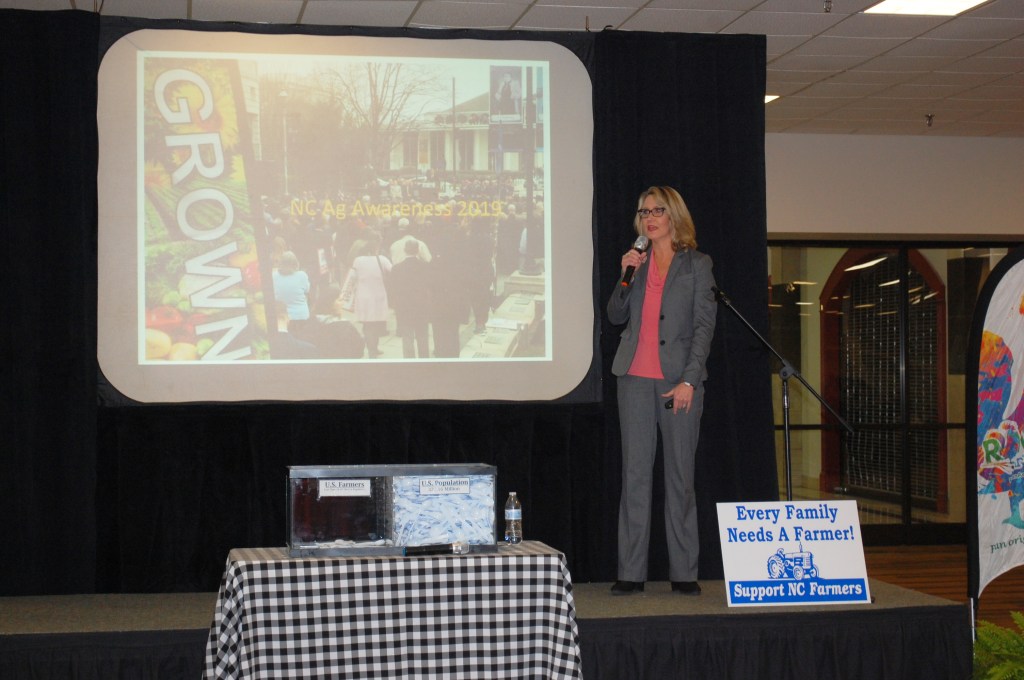 SALISBURY — Over a plate of eggs, sausage, grits and biscuits provided by local farmers, attendees met at the 7th annual Agriculture Awareness Breakfast at West End Plaza on March 21 to understand the challenges in the agriculture industry.

For Agriculture Awareness Month, the the Rowan Chamber’s Power in Partnership hosted “Salute to Agri-business” with Linda Andrews, the national legislative director for NC Farm Bureau, as the keynote speaker.

She said labor shortage, mental health of farmers, economy and environmental factors can be detrimental to a farming community. She added that the problems have worsened after two hurricanes hit North Carolina last fall.

“The industry of agriculture is very challenging industry,” Andrews said. “It has its ups and it has its downs. Currently right now we’re in one of the circumstances where we are kind of trending down and looking for a better day. At the end of the day, we are business.”

She reminded more than 225 attendees from the business and agriculture sector that agriculture affects people’s daily lives.

Michelle Patterson, of Patterson Farm and the chair of the Rowan Chamber Agri Business Committee, said agriculture is an $87 million industry and the top industry in the state, though farmers remain a small part of the population.

“As farmers we’re often told about how important it is to tell our story, however, we are less than 2 percent of the population,” Patterson said. “We need to understand ag issues, but these ag issues affect you. It’s critical for the United States to be able to feed and clothe its people and not to be dependent on other countries for its basic necessities.”

Nicole Holmes Matangira, the chamber board chair, said agriculture is important to society.

“We want to say we want you to be able to support this sector of the community because this is vital,” Matangira said. “No farms, no food, no businesses, no nothing right?”

Andrews commended the Rowan County community for its appreciation of agriculture.

“You’re going beyond ordinary and that is because you recognize the value and the importance of a partnership with the community, with agriculture and with the consumers make up your county, state and national level,” Andrews said.

The next Power in Partnership breakfast on April 18 will be on healthcare.