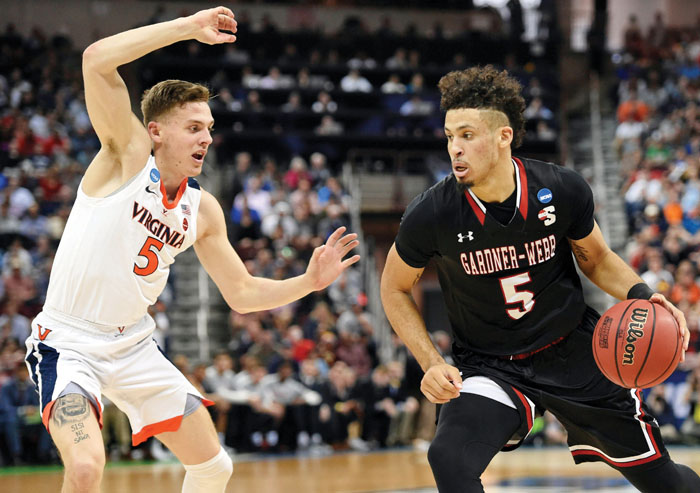 By JEFFREY COLLINS Associated Press
COLUMBIA, S.C. (AP) — This time, Virginia was not one-and-done against a 16 seed.
It looked possible, at least through the first half, as the Cavaliers were tested in the opening round of the NCAA Tournament. Down 14 points in the first half Friday against Gardner-Webb, another early exit was quite possible.
Shades of UMBC all over again? Not quite.
A year after becoming the first team to be stunned in a 1 vs. 16 matchup in the first round of the NCAA Tournament, Virginia gathered itself and beat the Runnin’ Bulldogs 71-56 in the South Region opener Friday.
Down six at halftime with the unthinkable prospect of losing early again looming, Virginia’s coaches took a measured approach.
They didn’t scream.
They stayed calm.
And this year it worked.
“Don’t you dare leave anything in this locker room,” Virginia coach Tony Bennett said he told his players. “But you don’t panic.”
Last season, the Cavaliers got tighter and tighter as No. 16 seed UMBC made shot after shot and Virginia could not answer. Virginia became the first overall No. 1 seed to lose its opening game and it was the first — and still the only — time in 35 years one of the top four teams in the tournament was sent home after the first round.
Against Gardner-Webb, the Cavaliers (30-3) saved their season and the stain of forever being tagged as a team that roars through the regular season only to fail spectacularly in tournament time.
DJ Laster’s short jumper put Gardner-Webb up 30-16 with 6:42 left in the first half and the crowd, dying to see history repeated, roared its support for the underdogs. The Cavaliers committed eight turnovers, one below their average for an entire game, and open shots simply were not falling.
But Kyle Guy sank a 3-pointer and Virginia’s defense clamped down to cut the Runnin’ Bulldogs lead to 36-30 at the break.
Ty Jerome remembered that locker room against UMBC. Coaches were yelling and the players were uptight.
“We felt their panic,” Jerome said.
Not on Friday.
The Cavaliers opened the second half with a 25-5 run and their trademark stifling defense forced 11 Gardner-Webb turnovers in the first 12 minutes after the break.
“They made a couple of buckets, we struggled to score and had some bad offensive possessions. Then we started to break down defensively and started to give stuff up we didn’t give up in the first half,” Gardner-Webb coach Tim Craft said.
De’Andre Hunter, who missed last year’s upset after breaking his wrist In the Atlantic Coast Conference Tournament, led the Cavaliers with 23 points. His layup and free throw after he was fouled put Virginia up for good. Mamadi Diakite added 17 points on 8 of 10 shooting and nine rebounds.
Jose Perez scored 19 points — he was 4 of 6 from behind the arc — for Gardner-Webb, which was playing in its first NCAA Tournament. David Efianayi added 12 points and for at least one half of basketball, Gardner-Webb (23-12) felt unstoppable.
“It’s unforgettable. I could carry this on for the rest of my life, and no one can take it from me,” senior Brandon Miller said.
TOURNAMENT TIMID VIRGINIA
Bennett said he never mentioned last year’s loss in the locker room at halftime. But he also figured he didn’t need to.
“That will always be part of our story,” Bennett said. “I understand that. I’m sure a lot of people thought it was going to be part of our story the second year in a row. But it’s just now, this is a new year.”
The first round upset was the latest and the biggest tournament stumble for Virginia, but it isn’t the only time the Cavaliers have failed to meet expectations. They have been a top seed in four of the past six tournaments and the second seed in a fifth, but have yet to make the Final Four under Bennett.
BIG PICTURE
Gardner-Webb: Not many No. 16 seeds can claim a double-digit lead over a No. 1 seed. The Runnin’ Bulldogs may have fallen short but won their first Big South Conference title and NCAA bid by beating the top two seeds in the league on the road and knocking off Wake Forest and Georgia Tech on the road.
Virginia: Being down 14 to a No. 16 seed isn’t going to make anyone feel more comfortable about Virginia’s chances to finally make a Final Four under Bennett. But Virginia’s ability to not wilt under all that pressure is a credit to Bennett’s work on his team’s psyche over the past year.
UP NEXT:
Gardner-Webb: The season is over.
Virginia: The Cavaliers face No. 9 seed Oklahoma in Sunday’s second round, which has been a land mine for Virginia too. Back in 2017, the 5th seeded Cavaliers lost 65-39 to No. 4 Florida.
___
More AP college basketball: https://apnews.com/MarchMadness and https://twitter.com/AP_Top25