Nine Rowan Countians will be among April 27 inductees into N.C. Military Veterans Hall of Fame 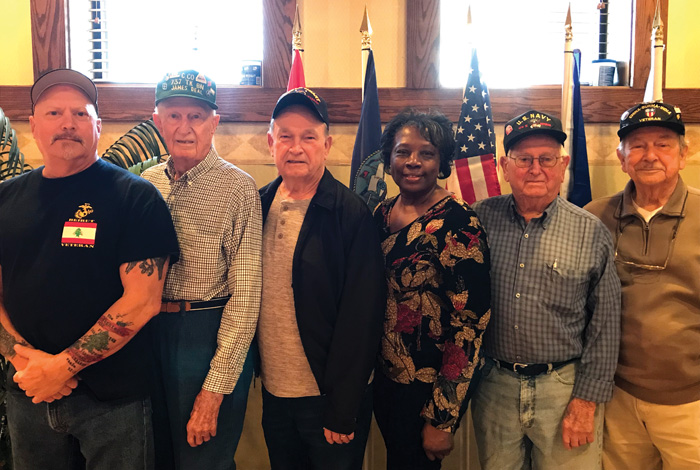 Submitted photo These Rowan Countians will be part of the second induction class into the N.C. Military Veterans Hall of Fame April 27. They include, from left, Dominic Darconte of the U.S. Marine Corps, James Deal of the U.S. Army, Coy Thompson of the Army, Thelma Luckey of Army, Glenn Hoffner of the Navy and Tom Harrell of the Army. This photograph was taken at a recent veterans coffee shop, which are held Tuesday mornings at the K&W Cafeteria in Salisbury. Hall of Fame inductees from Rowan not pictured in this photo include William Hill of the U.S. Navy, Cecil Ray Fisher of the Army and the late Robert Hartman, who served in both the Navy and Army.

SALISBURY — Of 29 people set to be inducted into the N.C. Military Veterans Hall of Fame April 27, nine will be from Rowan County.

Last year, an inaugural class of 22 men and women became part of the Hall of Fame, whose mission statement says it “primarily exists to honor North Carolina veterans and to educate North Carolina’s youth and communities about our real heroes.”

No Rowan Countians were among the inaugural inductees in 2018.

Most of the men are World War II veterans. Darconte served in the Marines from 1980-84. Luckey, a Salisbury restauranteur and longtime friend of fellow Rowan veterans through her Frontier Coffee Shop, served in Desert Storm.

Hartman died in 1999. He had served in the Navy during World War II, then became a career Army man after the war.

Hartman was the father of Dianne Hall, who has served on the organizing committee for the Hall of Fame induction banquet both years through her membership in the Elizabeth Maxwell Steele Chapter of the Daughters of the American Revolution.

The inductees will be invited to a meet-and-greet at the Embassy Suite in Concord, 5400 John Q. Hammonds Drive, on Friday night, April 26, and the induction ceremony, which includes a silent auction, will begin at 3:30 p.m. April 27.

There is no physical building as of yet for the Hall of Fame, which was started by retired Army Sgt. David Broadie, who serves as chief executive officer.

“I think it would be important to have something like this in Rowan County,” Hall said, noting the large number of military veterans in the county, along with the presence of the Hefner VA Medical Center in Salisbury.

Hall received a certificate of appreciation from the Hall of Fame last year on behalf of the local DAR chapter, which once again will help at the reception and banquet, which has a seating capacity for 500 people.

Hall also is working to get Rowan County sponsorships and contributions to the silent auction for the event. Debbie Barnhardt Jewelers and the Salisbury-Rowan Quilters Guild already have donated items for the auction.

Rowan Countians interested in supporting the Hall of Fame banquet through the auction or a sponsorship are being asked to call Hall at 704-640-1120.

The Military Veterans Hall of Fame website (www.NCMVHOF.org) includes profiles of the men and women who were in the 2018 class. It also has information on how to nominate a veteran for inclusion in the hall.

To be eligible for Hall of Fame consideration, the veteran must be of good character and have been honorably discharged. To be considered a N.C. veteran, he or she must meet at least one of three requirements — be a native of the state; must have entered military service from North Carolina; or must have lived in North Carolina at least 10 years.

A committee then considers nominated veterans in three different categories:

• Valor: The nominated veterans must have been awarded a significant award or awards for valor during an active combat tour.

• Achievement: The nominated veterans must have had a significant achievement contributing to the improvement of the military in an obvious manner, as confirmed by military recognition.

• Service: The nominated veterans had to have been honorably discharged, then made exceptional contributions to the community state or nation.

An expanded version of the Hall of Fame’s mission statement says it “strives to honor and recognize the valor, achievement and service of our state’s proud veterans … we shall educate and inspire the state’s youth and communities to humbly appreciate the true sacrifice of American freedom throughout their lives. We also assist veterans in the acquisition of life’s essentials, so that they can continue to thrive in their post-military career lives.”

Happy 100th! American Legion is a century old, and…